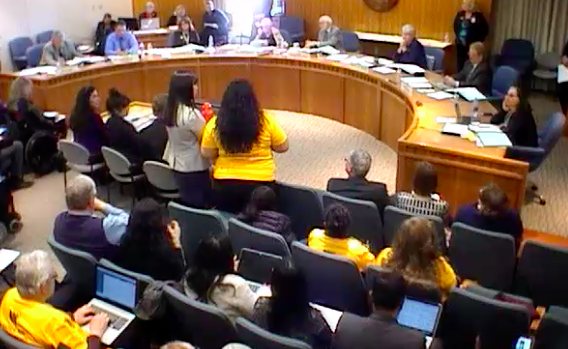 Dulce Ozuna, standing in yellow, tells state lawmakers that her husband was deported after his family called San Juan County Sheriff's Department to report a neighbor killing their dog.

Earlier this month, a thief stole a truck parked in the front yard of Dulce Ozuna’s home. She lives about an hour from Aztec, N.M. But rather than call the San Juan County Sheriff’s Department, she drove across the Colorado state line to report the theft in Durango.

Her skepticism traces to when her family reported the 2016 killing of their dog by a neighbor. Nearly three years later, the killer has not been caught. But her husband is living in Mexico, deported by authorities after the sheriff’s department alerted U.S. Immigration and Customs Enforcement to the father of six children after the family pet was shot.

“That collaboration totally upended that family,” Diaz said. Stories like what happened in San Juan County spread like wildfire through immigrant communities, she said. “There are many places throughout New Mexico where immigrant families are afraid to call police.”

Diaz’s group hopes to change that by passing legislation – SB196 – that would bar local law enforcement agencies and New Mexico State Police from using state or local resources to enforce federal immigration law or detain immigrants when a person’s immigration status is their sole focus. Law enforcement could still pursue crimes by undocumented immigrants, including, when authorities have a warrant or a person is suspected of a crime, Diaz said.

But with a week to go in the 60-day session, the legislation is bottled up in a Senate Committee and its chances weaken as March 16 — the last day — looms, although one sponsor, Sen. Linda Lopez, D-Albuquerque, said there was plenty of time to pass it.

The bill’s chances weren’t helped when a legislative analysis mentioned the possibility of New Mexico losing millions of federal dollars if President Donald Trump’s administration viewed the state as a “sanctuary.”

Somos and the American Civil Liberties Union of New Mexico pushed back on that analysis, sending a letter to Lujan Grisham, Sen. Majority Leader Peter Wirth and House Speaker Brian Egolf, all Democrats.

There’s no evidence that the federal government has the ability to deprive the state of money if the law passes, said Stephen Robert Allen, ACLU New Mexico’s policy director.

Several recent federal court decisions indicate that the federal government can’t make funding contingent on enforcement of federal immigration law, he said in an interview. “And we keep seeing more and more cases coming out and they’re going in one direction.”

How closely local law enforcement agencies should work with ICE is a hot-button issue, both nationally and locally. And like gun control debates, the immigration topic, as well as the bill, is revealing a rural-urban divide.

Three of the state’s four largest cities — Santa Fe, Las Cruces and Albuquerque, as well as Bernalillo County, the unincorporated areas around Albuquerque  — have policies that bar local authorities from enforcing immigration law.

Despite that, Somos, the ACLU and other immigrants rights groups receive hundreds of calls from around the state about loved ones who have been deported or are about to be.

More than 4,400 undocumented immigrants who had committed no crime other than crossing the border were removed from New Mexico and 17 counties in west Texas from October 2017 through September 2018, ICE data shows. Removals include deportations as well as immigrants who voluntarily returned to their home country.

“Sometimes, people fear the police more than the drug dealers,” Geier said, calling immigrant communities “tight lipped.” They figure if they contact police “we’re going to take you in and we’re going to deport you.”

San Juan County Sheriff Shane Ferrari dislikes the bill, saying it would deprive him of an important resource.

“My job is to make sure everyone is safe,” he said. “ICE is a resource to me.”

Ferrari, who became sheriff in November after two decades with the department, said he doesn’t go around looking for undocumented immigrants to identity for deportation. That’s not his job. But his department provides a rent-free office to an ICE agent and it solicits the federal agency’s help in identifying people it suspects are not being forthright about their identities.

That is how Ozuna’s husband landed on ICE’s radar.

Ozuna’s husband wasn’t suspected of a crime when San Juan County Sheriff’s deputies showed up to to take a report that a neighbor had shot the family dog. For months, the neighbor had harassed her family, occasionally yelling “Mexicans, go back to where you are from,” Ozuna said.

What deputies suspected was that her husband, Ricardo Torres-Gonzalez, wasn’t giving his real identity, so they called ICE, Ferrari said.

It’s a practice that wouldn’t fly in Albuquerque, Geier said.

“To go to ICE is a shortcut that would never be considered here,” the Albuquerque police chief said.

People giving false names or identities happens all the time in law enforcement and APD has access to several databases that can help identify people.

“We book people as John Doe and submit fingerprints through a database. If anyone is in the system, we’ll identify them,” Geier said.

Other databases — for tattoos, for DNA — can help.

In the case of Ozuna’s husband, the ICE search revealed that he had given deputies his real name. An undocumented immigrant, he had crossed the border more than once, according to a federal criminal complaint filed by an ICE agent and signed by a U.S. Magistrate Judge.

Also on his record was a 15-year-old court case from Utah that resulted in Torres-Gonzalez pleading guilty to two misdemeanor counts of assault against a police officer.

“ICE runs him and it pops up and he’s a felon,” Ferrari said.

Because Torres-Gonzalez had been apprehended crossing the border more than once, he is technically a felon. A first-time border crosser is charged with a misdemeanor, which is less serious than a felony. The second crossing earns a felony charge.

But the assault of a police officer in Utah in 2001 was a Class A misdemeanor, according to the Utah Law Library in Salt Lake City. And two misdemeanors don’t add up to a felony.

Ferrari said on Wednesday he didn’t know the details of the 15-year-old case.

The law library  confirmed some details in Torres-Gonzalez’s case in less than half an hour Friday. A 19-year-old Torres-Gonzalez was arrested in January 2001 and charged with interfering with legal arrest, intoxication, and two counts of assault against a police officer — all misdemeanors, according to the case docket.

The interfering with legal arrest and intoxication charges were dropped in exchange for a guilty plea to the two counts of assault against a police officer in June of that year, according to the law library.

It appears Torres-Gonzalez stayed out of trouble in New Mexico.

To Ferrari’s knowledge, Torres-Gonzalez had no run-ins with his department before the 911 call about the family pet in 2016. And a review of online records turned up no felony or misdemeanor charges in the New Mexico state court system for Torrez-Gonzalez.

Nonetheless, weeks after their dog was killed, sheriff’s deputies showed up with ICE agents. With guns drawn, they were looking for her husband, Ozuna said. At one point, they pointed their weapons at her daughters, traumatizing them.

He spent more than a month in San Juan County’s detention center and was transferred to Otero County before he was deported, she said.

Actions by the San Juan County Sheriff’s department led to the split up of the family. Asking ICE to help identify Torres-Gonzalez when he wasn’t suspected of a crime wouldn’t be legal if SB196 passes the Legislature and is signed into law.

These days, Torres-Gonzalez lives just across the U.S./Mexican border in Polamas, Chihuahua, where their son, a U.S. citizen, lives with him and crosses the border every day to attend school in Deming, N.M.

Torres-Gonzalez’s deportation has left his family emotionally bereft and, because he was a primary breadwinner, struggling financially, Ozuna said. She and her children lived in a shelter for several months after her husband was taken away.

It is hard to talk about this, she said through an interpreter.

She talks with her husband every day.

“Every time we talk I feel the frustration,” she said through an interpreter. “Because when you think about how a 911 call, instead of helping us, the police separated us. He, my husband, is the father of six children.”