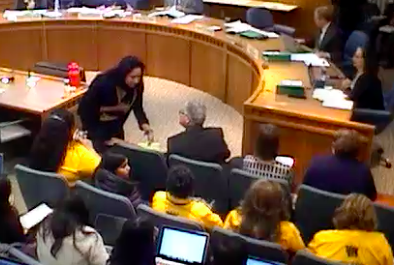 Marcela Diaz of Somos Un Pueblo Unido, an immigrants rights group, confers before a hearing on SB196 at the Senate Public Affairs Committee on Jan. 25.

The governor’s skepticism effectively dooms SB 196, which would bar local law enforcement agencies and New Mexico State Police from using state or local resources to enforce federal immigration law. It also would stop them from detaining immigrants when a person’s immigration status is their sole focus. It wouldn’t stop law enforcement from pursuing crimes by undocumented immigrants, including when authorities have a warrant or a person is suspected of a crime, however.

The measure has been stuck in Senate Judiciary Committee since late January.

The governor, who publicly opposed diverting local law enforcement resources to accomplish federal immigration law during last year’s gubernatorial campaign, spoke about the bill in a short one-on-one interview with New Mexico In Depth on Tuesday.

Lujan Grisham was troubled, she said, by the potential for New Mexico to lose millions in federal dollars if the bill became law. President Donald Trump has threatened to withhold federal funding to cities and states if in his view they are “sanctuaries” for undocumented immigrants.

“I think that there are legitimate concerns that I’ve heard raised in (legislative) committees about what that does to New Mexico’s  ability to get federal funds,” the governor said. “We’re not dealing with a federal government that is in my opinion working in a fair, productive, fact-based environment. So I do think those are legitimate concerns.”

Advocates of the legislation say there’s no evidence that the federal government has the ability to deprive the state of money if the law passes. In fact, several recent federal court decisions across the nation indicate that the federal government can’t make funding contingent on enforcement of federal immigration law, according to the American Civil Liberties Union.

“The courts have spoken,” said Peter Simonson, Executive Director of the ACLU of New Mexico. “The president does not hold the purse strings, congress does.”

Marcela Diaz of Somos Un Pueblo Unido, an immigrants rights group that pushed for the legislation, said “We shouldn’t cave into the racist and illegal threats of President Trump, especially when so many New Mexican lives are at stake.”

“Several jurisdictions in New Mexico have been bold in protecting immigrant families and continue to receive federal funding. We won’t stop organizing  until all our families feel safe in every corner of the state,” Diaz added.