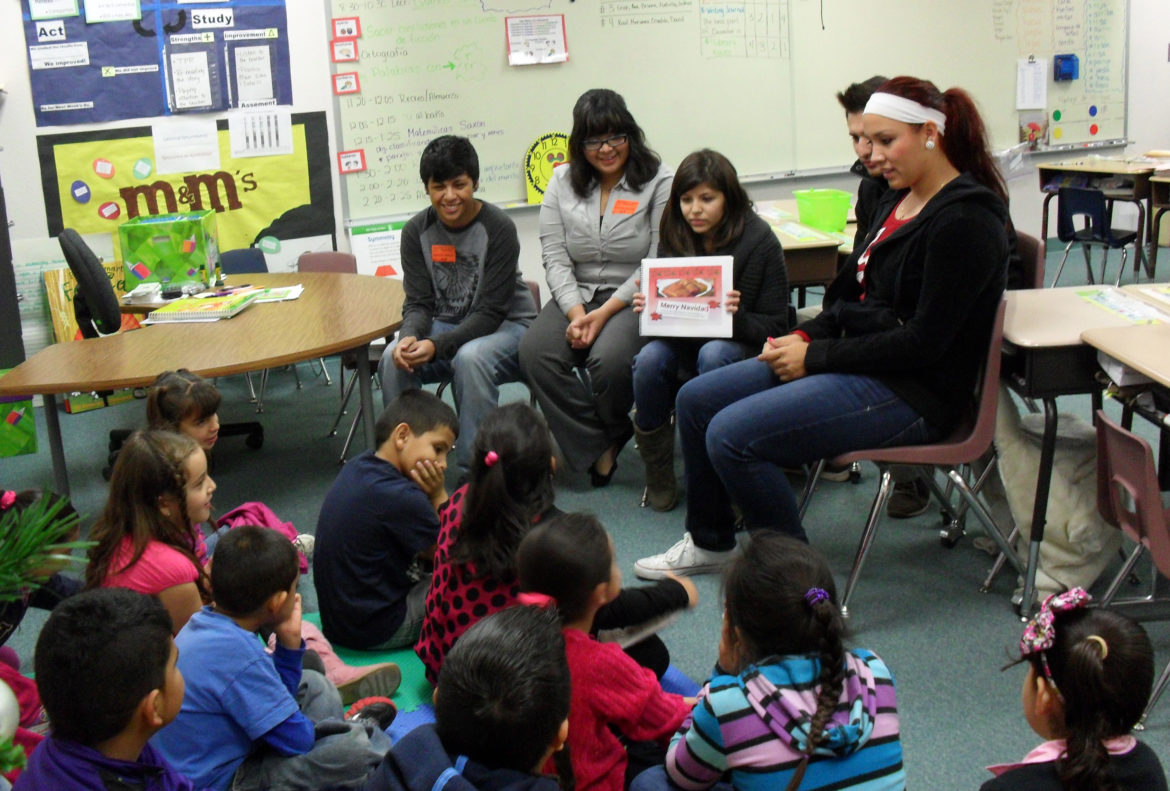 Knowing a second language can be a big advantage: Being bilingual can help people get a job in a vast range of professions, from fast food employees to doctors, and it’s been shown that children who can speak, read and write in two or more languages have cognitive advantages over monolingual kids, from better attention to the ability to more easily switch tasks.

But with a shortage of bilingual and dual language classrooms in New Mexico, bilingual students may have a difficult time maintaining the Spanish they learned at home.

English learners have a diminished opportunity to become biliterate, or even succeed in school at all. In fact, a recent lawsuit found that the state has failed in its duty to educate children who don’t speak English – so-called ELLs – as well as Native Americans, low income and disabled students.

It’s a challenge that New Mexico State University is trying to address by recruiting and training more bilingual teachers, and that Las Cruces Public Schools is tackling through bonuses and incentives.

Jennifer Haan, director of Bilingual and Migrant Education at LCPS, said because of the city’s proximity to the border and the culture in New Mexico, bilingualism is not a want, but a need.

“It’s not just about speaking Spanish and English. It’s about actually learning in Spanish and it’s about being able to show what you know in both languages,” Haan said.

Across New Mexico nearly 15 percent of students are classified as English language learners. That varies greatly depending on the district. It’s about 12.5 percent for Las Cruces Public Schools, but is as high as 36.6 percent at nearby Gadsden Independent School District and 41 percent at Hatch Valley Public Schools in Doña Ana County.

LCPS is trying to address its shortage of teachers with incentives and extra resources, such as a $1,500 stipend for bilingual teachers, and professional development and mentors. But those resources are limited. There are only two staff members who can give professional development trainings, $1,500 isn’t always enough, and mentors cannot invest as much time as they would like, Haan said.

“We have to put the resources and support behind it in a bigger way,” she said.

To increase the number of educators who can teach non-English speakers and improve their educational results, NMSU’s  School of Teacher Preparation, Administration and Leadership has changed how it’s training students and working to recruit more people into bilingual education.

The school changed its curriculum in 2016, and now every elementary education student at NMSU takes classes that prepare them to teach English learners, and all will graduate with TESOL (Teaching English to Speakers of Other Languages) endorsements.

But fewer learn how to teach in Spanish. Only about three or four students graduate with a bilingual endorsement per semester, according to Magdalena Pando, an associate professor in the teacher’s college.

Brenda Herrera will be one of those graduates. A junior at NMSU getting her bachelor’s degree in elementary education with a bilingual teaching endorsement, Herrera spends most of her mornings at Valley View Elementary School in Las Cruces, where she learns from another teacher, and prepares and teaches lessons of her own.

Growing up, Herrera spoke Spanish at home with her parents, but didn’t get a bilingual education. She sees the value in it now.

“As a bilingual teacher, you are able to connect with the students in a more personal level because you understand how they learn,” she said. “Also, you can teach students the value of being bilingual and the opportunities that open up for them. Students can learn to embrace their culture because they feel welcomed in the classroom.”

Pando is trying to increase the number of students like Herrera, who with NMSU’s director of Elementary Education, Blanca Araujo, participates in a grant collaborative with the other four major universities in New Mexico. They come together with their colleagues once a month and brainstorm ideas on how to bring more students in to study bilingual education.

Pando and Araujo want to start a bilingual education branch of Educators Rising, a career organization that develops a pipeline from high school classrooms, so communities can “grow their own” teachers.

With so many Spanish speakers in New Mexico, the workforce just needs to be encouraged. Public Education Secretary Karen Trujillo told NMID that when she visits Educators Rising chapters, an organization she helped bring to New Mexico, more than half of the students will raise their hands when she asks if they are bilingual — but few have been told about the opportunity to become certified in bilingual education.

Trujillo said the state needs to take an asset-based approach to speaking a second language. “Saying, Oh my God, you’re bilingual? That’s awesome. You know what, what we need to do with you now is make sure that you’re biliterate when you’re done; that it’s not just talking in Spanish to your grandma or to your friends on the playground,” she said.

Haan believes this shortage of bilingual teachers and college students is not only LCPS or NMSU’s issue to solve. Or even just the state’s.

“If we’re gonna be really serious about transforming education … it has to become a priority in our country,” she said.