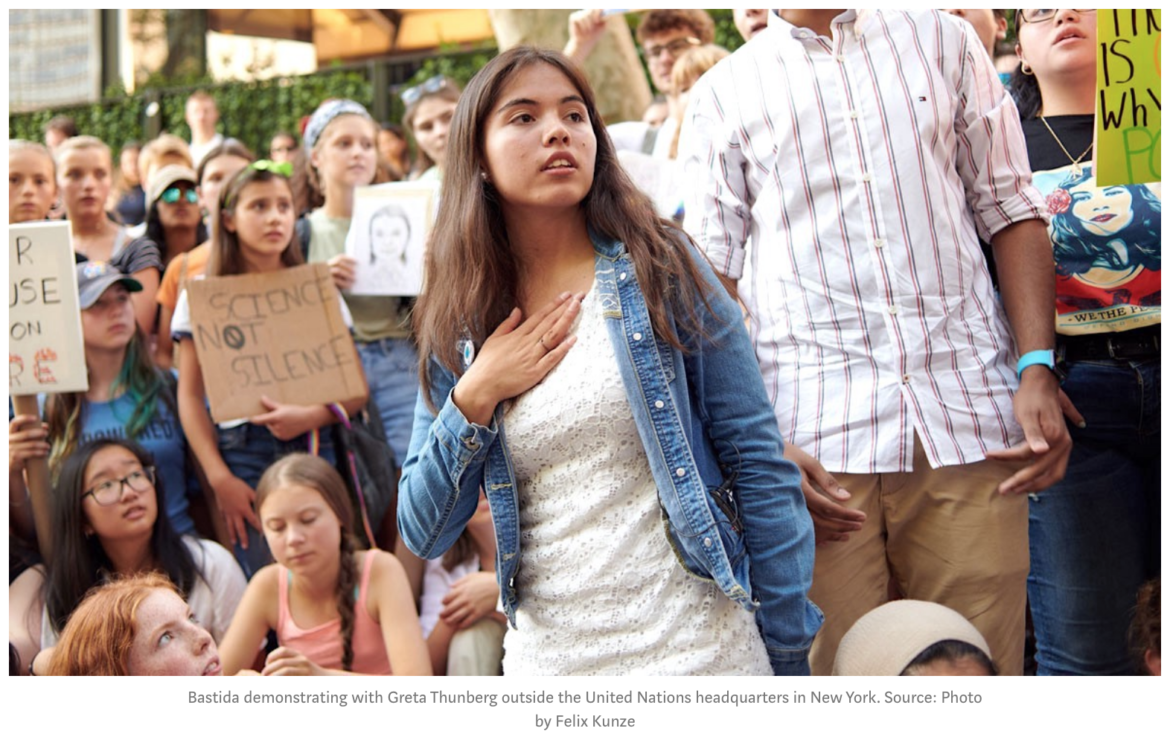 Nearly five years ago, after her town suffered prolonged drought followed by heavy rainfall and pervasive flooding, Bastida realized that something was disrupting Earth’s natural balance. “Our lake was drying up because we didn’t have any rain,” she said. “We live with the cycles of Earth, and for rain to not come when it’s rainy season — that’s crazy. When it doesn’t rain, the land gets dry and we depend on the land. It’s our support system. Then we had massive amounts of rain that wouldn’t stop.”

It took a little while for her to make the connection between these extreme weather events and climate change, but once she did, she became galvanized. By then, she and her family also had relocated to New York City, and, after a visit to Long Island — where she saw the still-lingering damage left by Superstorm Sandy — she became convinced that “wherever you are, the climate crisis is affecting everyone, everywhere,” she said. “I felt like I needed to do something.”

Today, Bastida, 17, a high school senior, is one of the strongest and most effective voices in the youth climate movement. She is a leader of the Fridays for Future youth climate strike, a campaign that grew out of teenager Greta Thunberg’s 2018 daily three-week vigil in front of the Swedish Parliament building calling upon the government to take action against climate change.

Although Thunberg has been the primary focus of public attention — as well as the target of attacks from right-wing climate deniers — since sailing to New York, she has inspired countless other ‘Gretas’ around the world to initiate student strikes and other activities to force action against climate change. In the United States, this collective sense of urgency has energized and engaged young people to march in the streets, swarm Congressional offices and abandon their classrooms.

In March, Bastida organized a strike at her own Manhattan school, and 600 students walked out with her. Currently, she is mobilizing students and adults to join The Global Climate Strike that begins September 20 with a huge youth-led climate walkout, followed by a week of hundreds of events in 117 countries, all aimed at pressuring global leaders to do something about the escalating climate crisis.

“We don’t want people to suffer from the climate crisis to realize we are in a crisis,” said Bastida, who always calls it a crisis, never climate change. “We need to change our culture and change our narrative. For too long, the narrative has been that this is some big distant thing that will happen in the year 2100. But pollution is here. Heatwaves are here. Wildfires are here. Melting ice caps are here. Floods are here. Category 5 hurricanes are here. It’s here already.”

Bastida is a member of the administration committee of the Peoples Climate Movement, as well as the Sunrise Movement and Extinction Rebellion, and brought representatives from these organizations to her school to speak to members of her environmental club. She organized a youth activism training program that focuses on climate justice, filled her school with climate posters — which administrators later removed — and did everything she could to spread the climate message on social media.

“Xiye comes into the work of climate activism with deep personal commitments and passions for the environmental justice movement,” said Sarmishta Govindhan, a spokeswoman for 350.org, which works to end fossil fuel use and promote renewable energy. “She brings an incredible energy to the organizing spaces she enters and is able to use her personal story of being directly impacted by the climate crisis as a young, indigenous person to move people into action.”

Bastida knows Thunberg, who is scheduled to speak September 23 at the UN Climate Action Summit, and describes her as shy, grounded and very humble. “She’s been able to articulate the climate crisis very well,” Bastida said. “Her consistency and her message has been perfect. Her message is to unite behind the science. We need to recognize the science. There is nothing political about her. She wants to empower other youth to be seen and recognized around the world, and she really lifts other voices up. It’s amazing to see her moral compass. She is a reflection of all of us. We see ourselves reflected in her because her message is about young people.”

Bastida, a high school senior, hopes to focus on environmental studies, international relations and political science when she starts college. But she has no plans to ease up on her climate activism. “It’s too important,” she said. “In 10 years I’m going to be 27 and I want to be worrying about my career or how many children I’ll have — not worrying about where I’m going to live and whether I’ll be living in a place that will be flooded, or flattened by a hurricane, or that I’ll have to always stay inside because it’s too hot to leave.”

She sees her climate work as a way to return to her origins, an approach she hopes also will appeal to others. “People say the climate movement started decades ago, but I see it as indigenous people protecting Earth thousands of years ago,” she said. “We need to bring [this philosophy] back and weave it into today’s society. People are here not to take over life, but to take care of it. It shouldn’t be ‘we the people.’ It should be ‘we the planet.’”

This story originally appeared in Nexus Media. It is republished here as part of New Mexico In Depth’s partnership with Covering Climate Now, a global collaboration of more than 250 news outlets to strengthen coverage of the climate story.