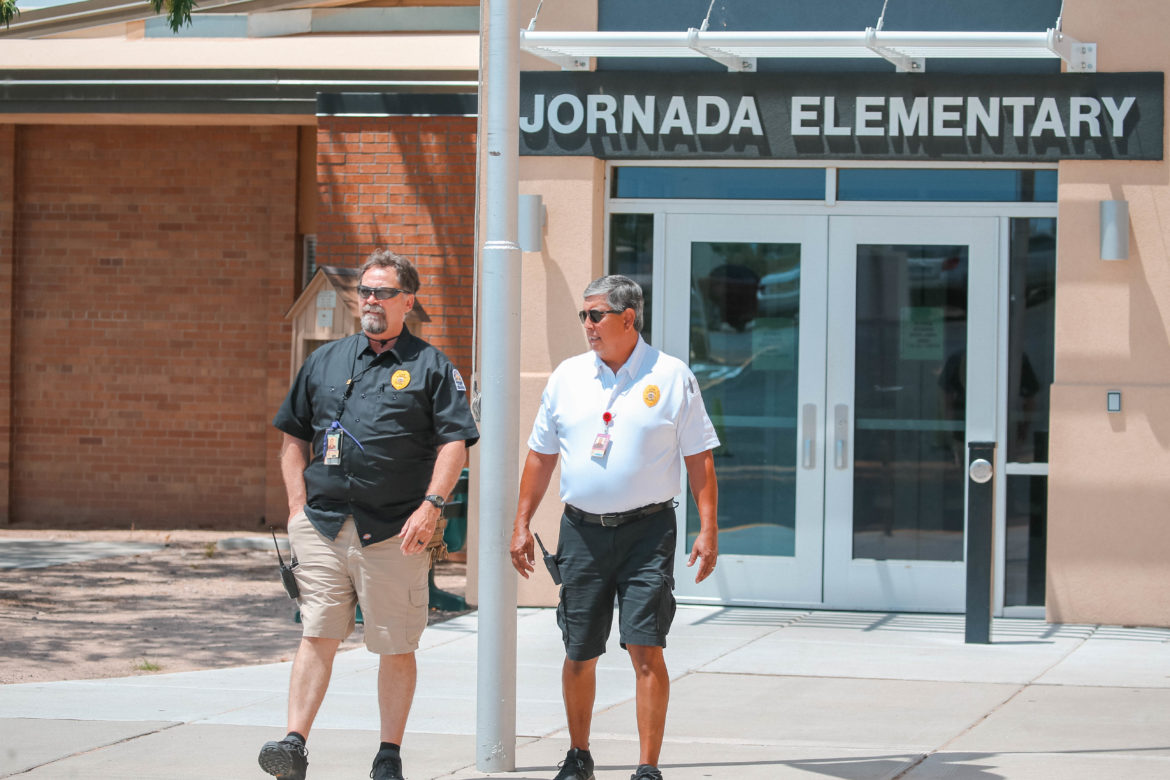 Todd Gregory, left, head of security for Las Cruces Public Schools, and Richard Parra, a security officer, walk out of the front office at Jornada Elementary School in Las Cruces on Friday, Aug. 9, 2019. The school's front entry was recently redesigned to limit access to classrooms. It's one of several measures to fortify the school.

It had already begun fortifying school buildings in response to earlier mass shootings.

As the school year starts in Las Cruces, it is drill season. Over the next month, once a week students and teachers will practice lock-down, shelter in place, evacuation and fire drills, said Sean Barham, associate director of operations for public safety at LCPS.

But looming over them will be Saturday’s slaughter less than 50 miles down the interstate in El Paso, a city where many have strong family or cultural ties and where many of the victims looked like the students returning to school this week in Doña Ana County.

“You’ve got to give them the skills they need,” he said. “You also have to balance it out because you want kids to want to come to school and feel safe.”

Amid the grief and fear, parents and school districts throughout the region are looking for ways to ensure the physical and emotional wellbeing of students.

Worry and preparation are warranted, but keeping children’s maturity in mind is also important, said Katherine Courtney, an expert on adverse childhood experiences and co-director of the Anna, Age Eight Institute at Northern New Mexico College, which is leading an effort to prevent childhood trauma in New Mexico.

“The damage that we can inflict on kids’ brains by keeping them in a constant state of fear is also a very real thing that we have to watch for,” she said.

Look at a map and the region is divided by lines. The Texas-New Mexico border. The U.S.-Mexico border. But as anyone can tell you who spends much time here, the lines blur in people’s everyday lives. People travel between the cities to work, shop and visit family members in El Paso and Juarez. It is not unusual for people to have loved ones in all three places – Juarez, El Paso and Doña Ana County.

That has triggered Las Cruces Public Schools to identify staff and students most vulnerable to emotional distress, said Amy Himelright, coordinator of the employee assistance program.

The sister of one Las Cruces Public Schools employee was killed Saturday, Himelright said. Other employees were near Cielo Vista Mall when active shooter alerts and radio reports went out.

The district is asking teachers to informally assess how much students know about the mass shooting and whether they have concerns or questions.

After a traumatic event, “we really want to let the individual student, especially in the young students, drive our response and drive the conversation,” Himelright said.

Some kindergarteners might not be aware of what happened last Saturday, she said, but others may have watched it on the news with their families and worry that it can happen to them.

“We need to be open and willing to listen and talk to those kiddos and meet them wherever they’re at,” she said.

Since school just started Thursday, it is too soon to tell how shaken students and staff are, Himelright said, so the district wants to focus on how people feel in three weeks or three months.

“Do we see a kiddo dissociating or shutting down? Being hypervigilant?” she said.

Just south of Las Cruces is the Gadsden Independent School District, an expansive district that sprawls to the Texas border and serves small cities and colonias, isolated rural communities where the school might be one of only a few public services.

Counselors and social workers were mobilized in Santa Teresa, Anthony and Chaparral, the district’s largest communities.

“As a school system, I think the neat thing is we’re sometimes the hub of those communities,” Dempsey said.

He hopes the tragedy spurs students and parents to pick up signs — especially on social media — that children may be hurting emotionally or might be considering hurting others.

“Unfortunately, that’s the world they are growing up in. I know it’s hard for me because that’s not the world I grew up in,” he said.

On Saturday, Aug. 3, Claudia Ocon was on Interstate 10 driving south with her 9-year-old son and mother to visit family in Juarez when news of the active shooter came on the radio.

The timing couldn’t have been worse because her son, a fourth-grader at Loma Heights Elementary in Las Cruces, already has trauma and attachment issues. They managed to keep it together, she said, but it wasn’t easy.

“We are Hispanic, and he knows they were the target,” Ocon said. “I had to have the conversation with him that not everyone is like that. Not everyone is racist.”

Similar conversations are happening at dinner tables and bedsides, as parents express everything from deep sadness and confusion to anger that they have to have these conversations with their kids.

Salome Mossman, a Las Cruces mother of two whose children have dual U.S. and Swiss citizenship, said her 7-year-old daughter asked why someone would do such a horrible thing.

“I shared with her that there must be tremendous pain in that person’s heart to want to cause even more pain. And that our president thinks and tells us that white people are better than others, which is not true, because we are all the same on the inside,” Mossman said via Facebook.

The American Academy of Pediatrics has a guide to talking to children about tragedies. Among its suggestions is asking what children have already heard, then ask if they have questions. It recommends avoiding graphic details and exposure to media. Signs to watch out for are trouble sleeping, nightmares, changes in behavior or complaints about feeling tired or sick.

The racial aspect of the El Paso shooting complicates the story for parents and teachers.

The three school districts serving Doña Ana County are overwhelmingly Hispanic: Three-quarters of the Las Cruces student population, and more than 95% at both Hatch Valley and Gadsden. The gunman railed against a “Hispanic invasion” in a manifesto posted online before Saturday’s shooting and targeted Latino shoppers.

“I’m a Latina. I’m Mexican-born, American-raised,” Ocon said. “I’m everything that this individual was against. … But I just remind (my son) that we have to live in faith that Christ is going to be with us, and we can’t live our lives in fear because that’s what these people want.”

Courtney, the childhood trauma specialist, said many children in New Mexico were already afraid that Immigration and Customs Enforcement could take their parents away, something that happened on Wednesday in Mississippi when ICE agents arrested 680 workers and left some children with no one to care for them.

She said racism injures children of color, pointing to a study that shows it has long-term effects on children’s health.

“They grow up with these categories in their heads, and we’re building that into our kids,” she said.

One thought on “Amid grief and fear, borderland kids return to school, a different world”