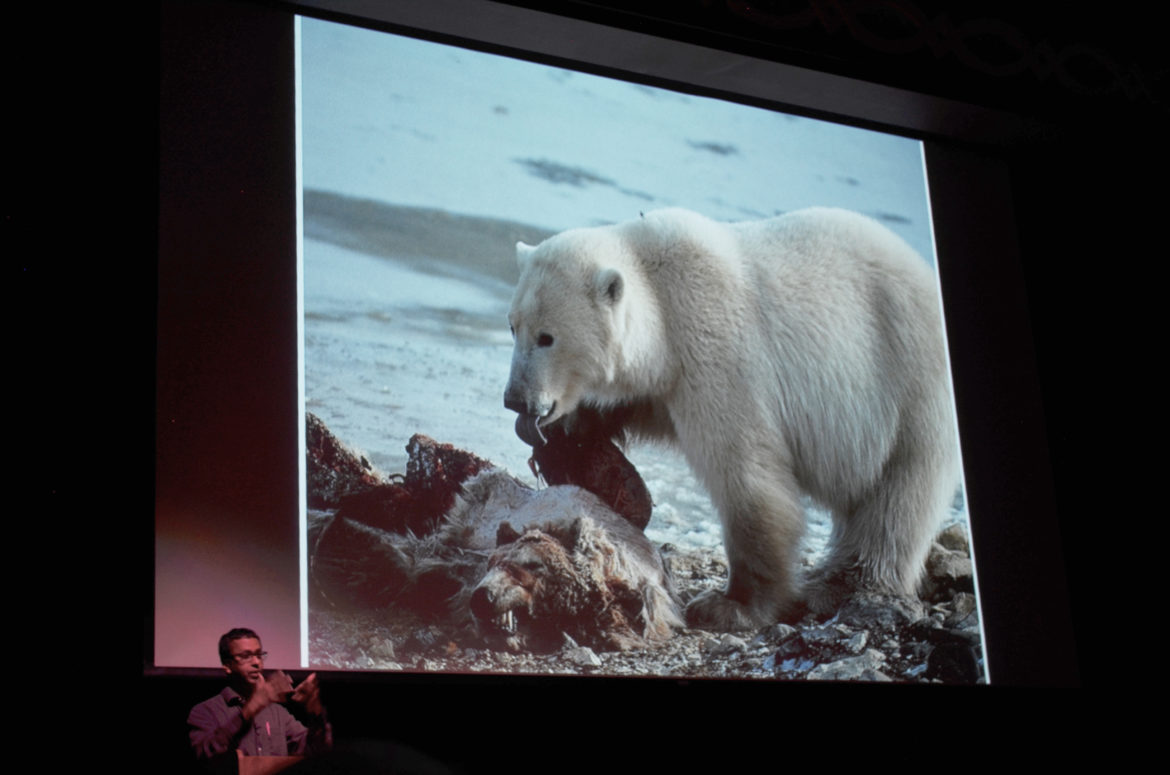 Subhankar Banerjee, Professor of Art and Ecology at the University of New Mexico, speaking in front of an image he took of a polar bear eating another polar bear. Banerjee spoke at New Mexico State University on Nov. 20, 2019 as part of a climate change discussion series. Image by Leah Romero.

Sea ice is melting, droughts and wildfires are becoming more severe, and countless other effects are currently being experienced around the world due to changes in climate. But because many people around the world don’t feel the effects directly, little action is taken to combat it, said Subhankar Banerjee, Professor of Art and Ecology at the University of New Mexico.

A good example, Banerjee said, is in northern New Mexico, where it’s “largely unknown” that roughly 90% of mature piñons died in the early 2000s, which Banerjee said shows the impact of both an ecological crisis and a climate crisis.

Banerjee spoke to an audience in Las Cruces in late November about the decimation of hundreds of animal and plant species around the world. The 2018 global “Living Planet Report” produced by the World Wildlife Fund, a conservation organization, indicates an overall decline of 60% in vertebrate populations worldwide — animals such as mammals, birds, reptiles and fish — between 1970 and 2014.

“This crisis as I see it is a more expansive crisis than the climate crisis,” Banerjee said.

But the climate crisis is significant. With roughly 7.7 billion people in the world, “we have already exceeded the capacity of the planet in terms of its ecological footprint,” said Jorge Vanegas, dean of the college of architecture at Texas A&M. Vanegas spoke at New Mexico State University in early November about the steps people, specifically those involved with colleges and universities, could take to address and lessen the effects of climate change.

“You have to start by changing humans in some way that actually can help you address climate change,” Vanegas said. “It’s about people at the end of the day.”

One of the problems is that humans resist change, he said, but it can happen. As an example, Vanegas said when he arrived at Texas A&M, one of that state’s flagship research universities near Houston, sustainability was a word he found difficult to use within the college setting because “there was a Board of Regents that hated the word.” Now, many years later, the university has a master plan for sustainability, which was started in 2010 by their Office of Sustainability.

“I will not say that we are at the forefront of where we can be, but we have a lot of things going on,” Vanegas said.

Both Banerjee and Vanegas said a large part of tackling climate change and the devastation of biological systems and organisms, was to bridge the gaps between the “silos” of different communities. Banerjee highlighted art, biology and history as examples of silos that could work together to combat the negative impacts of the changing climate.

As an artist, Banerjee uses images to inspire or bring awareness to the issue of declining biology. Currently, he is co-curator of “Species in Peril Along the Rio Grande,” a multi-institution art exhibition and discussion series about climate change at multiple institutions from Denver to Ciudad Juarez. He said art can create emotional connections to a situation, such as one of his images of one polar bear eating another because of lack of food.

He said there is “a much higher purpose for art” in that it facilitates collaboration with people from other places or from other social groups to show that the environment, animals and humans all have importance.

“What we need in addition to the science [of climate change] is we’ve also got to listen to the people as well, and these communities,” Banerjee said.

Banerjee and Vanegas spoke in Las Cruces as part of NMSU’s Climate Change Education Seminar Series, which will continue through April.