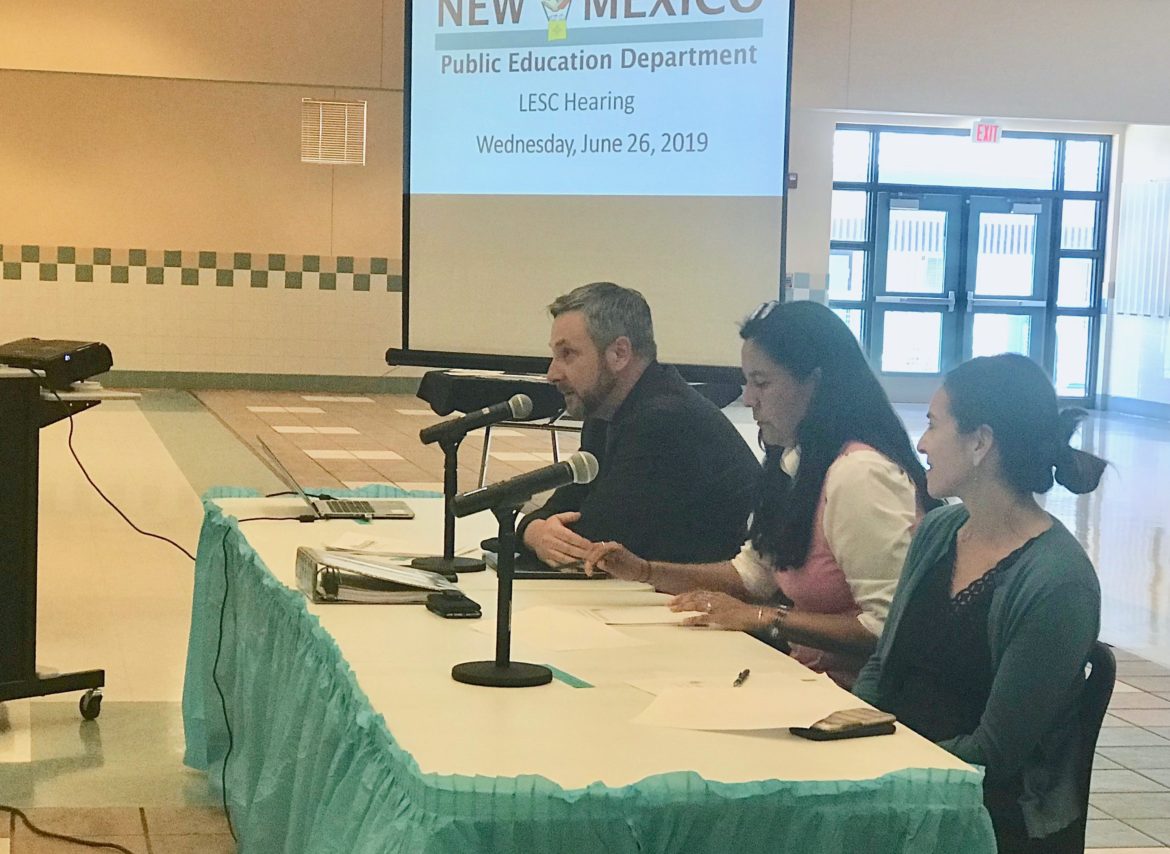 Deputy Education Secretaries Tim Hand, left, Kara Bobroff and Gwen Perea Warniment give an update on PED efforts to comply with the Yazzie Martinez education lawsuit ruling at a meeting of the Legislative Education Study Committee on Wednesday, June 26, 2019..

Lawmakers got a status report of sorts on New Mexico’s response to a landmark education court decision last year when members of the Legislative Education Study Committee met Wednesday in Santa Teresa.

After a day of hearing from rural superintendents, the Transform Education NM coalition that formed after the lawsuit, and deputies from the Public Education Department about progress made toward resolving the state’s failures in educating at-risk children, it’s clear there are still a lot of questions.

Much of the discussion centered on implementation of new laws and how additional money lawmakers appropriated this year is being spent. Committee members generally were happy with teacher raises, but had pointed questions about the roll out of extended learning time programs, the way some districts handled raises and how money was being spent.

“Let’s talk about the students first. We’ve increased funding for at-risk, ELLs, special ed. That’s trickling down to the districts and I hope it’s something positive,” said Rep. Raymundo Lara of Chamberino, whose district includes the Gadsden schools where the meeting was held. “I haven’t seen the results of it yet. I don’t know if K-5 Plus is going to make a big difference. … To be honest, I’m kind of skeptical.”

Rep. Rebecca Dow of Truth or Consequences has seen problems in the implementation of educator raises and in extended learning programs that have disproportionately affected small districts.

She said districts were given confusing directions on teacher raises that led to higher than mandated 6% increases — which resulted in some districts being short in their budgets and being forced to drop teachers and things like literacy programs and social workers.

Some districts added the 6% raise on top of base wage increases that were $40,000, $50,000 and $60,000 for the three experience tiers. Others boosted management salaries because in some cases teachers and principals made more than superintendents, she said.

Some rural districts couldn’t implement K-5 Plus (a program that adds 25 days to the school year for elementary schools) to new legislative standards, so they lost existing K-3 Plus programs. That means fewer students are being served in communities like Truth or Consequences and Silver City, while affluent districts like Los Alamos can apply for reverted dollars.

“We funded really great, needed raises, and now we’re going to have to figure out how to move the needle on the outcomes for the other things,” Dow said.

Sen. Mimi Stewart, who was a leading force behind the main education bills passed during the session, expressed some frustration with how those bills were being implemented. She said she has heard from districts about wide variances in raises, unused textbook funds despite years of shorting the budgets for classroom materials, and class size waivers being sought despite moves to limit them.

Most especially, Stewart wanted to know, “What are districts doing with that $120 million in new money?”

Deputy PED Secretary Tim Hand, who reported district budgets were being finalized, told Stewart that new accountability measures in the budgeting process should make that question easier to answer.

This is the first year districts must provide details on how they are using at-risk funding. Some are more detailed than others, Hand said, but it is a learning process. The department plans to analyze the narratives to see where the money is being spent and if it’s being used effectively.

Otherwise, neither Hand nor Deputy Secretaries Kara Bobroff and Gwen Perea Warniment, also at the meeting, had many specifics for lawmakers. They did provide insight into their thinking about how to improve education for students identified in the Yazzie case as being left behind: English language learners, Native Americans, special education and low-income students.

Initiatives include universal K-5 Plus, bilingual programs, the drive toward universal preschool and awarding $5.1 million in grants for tribes and pueblos to implement the Indian Education Act. Much of those grants would go to social-emotional programs — where kids learn to regulate their own emotions and relate to others — and maintaining native languages.

They also outlined four priorities for improving education for children:

After the meeting, Bobroff said the department had nearly completed its assessment of which programs were working, not working or showed promise. Bobroff has been charged with  ensuring compliance to the Yazzie Martinez ruling. She said she was confident PED was on track with Singleton’s ruling, and their plans have lots of overlap with Transform Education NM’s goals to increase multicultural learning environments.

“We have a lot of momentum going forward, so that it becomes about how do we set the right mission, vision, goals and initiatives to support the outcomes we want to see,” Bobroff said.