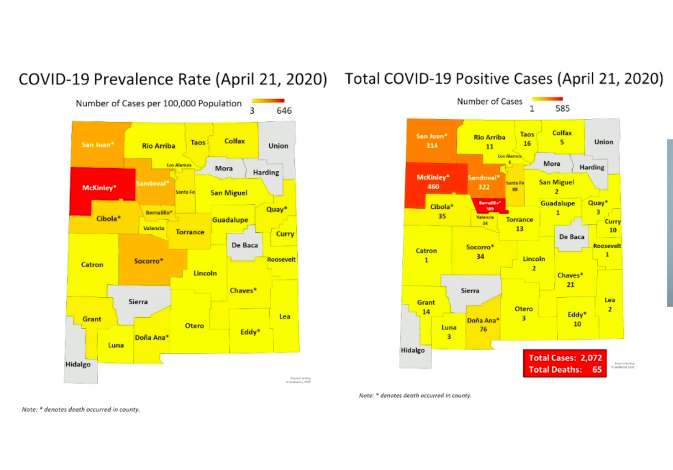 McKinley County, shown in deep red, has the highest per capita infection rate in the state, according to maps displayed during Wednesday's update on COVID-19 in New Mexico.

Gov. Michelle Lujan Grisham for the first time Wednesday revealed what marks the state of New Mexico might need to hit before it starts to reopen its economy, as state officials presented good news about progress in flattening the COVID-19 curve. But the reopening won’t be immediate. Lujan Grisham said she had decided to extend her stay-at-home order through May 15.

Wednesday’s presentation followed that general outline, good news tinged with bad and a note of  uncertainty.

Six more deaths were reported and McKinley County, the state’s current hotspot, had a per capita infection rate seven times larger than Bernalillo County, which has the largest number of positive cases.

In contrast, for the first time, the state is no longer projecting a statewide shortage of hospital beds, with Santa Fe County, in particular, doing a good job in flattening the curve, said Dr. David Scrase, Lujan Grisham’s human services secretary.

“This is good news, we’re doing it right,” the governor said. If New Mexicans continue to stay the course, the state can get to a point where a methodical, careful re-opening could happen. Lujan Grisham announced the formation of an economic recovery council composed of 15 business leaders around the state, who will help inform the process of re-opening the state.

The governor urged New Mexicans to not let up on the social distancing she and other officials credited for the current flattening of the COVID-19 curve. She assured Wednesday’s audience that she and other state officials would continue to work hard to prepare for easing restrictions and getting New Mexicans “back outside” as soon as possible while protecting public health.

“Keep doing what you are doing, New Mexico,” the governor added. “Only you can keep the pressure on.”

Looming over Wednesday’s presentation, however, remains all the unknowns that surround the coronavirus that causes COVID-19.

“There is a lot that we do not know,” Scrase acknowledged, joining what the chorus of experts across the country have been saying and continue to say about a virus human beings have never come into contact with.

One unknown is whether this first phase might be followed by a second phase, a point the director of the federal Centers of Disease Control and Prevention spoke to Tuesday when he warned that a second phase of COVID-19 might be much worse.

“There’s a possibility that the assault of the virus on our nation next winter will actually be even more difficult than the one we just went through,” CDC Director Robert Redfield said in an interview with The Washington Post. “And when I’ve said this to others, they kind of put their head back, they don’t understand what I mean.”

“We’re going to have the flu epidemic and the coronavirus epidemic at the same time,” he said.

Scrase hammered that point home by pointing to history. Leading with a slide that quoted Winston Churchill about those who do not learn from history being doomed to repeat it, he followed it up with a slide that showed the second wave in the 1918 influenza epidemic, in the fall and winter, not the milder first phase, was what  killed millions around the globe. It’s the big spike in the middle of the graph.

On a personal note, if you’re interested  in learning more about that history, which is informing some of the debate around COVID-19, I highly recommend John Barry’s history of that pandemic, The Great Influenza. It’s an eye-opening read, one that helps you become clear-eyed about the difficulties fighting a new virus raging among human populations.