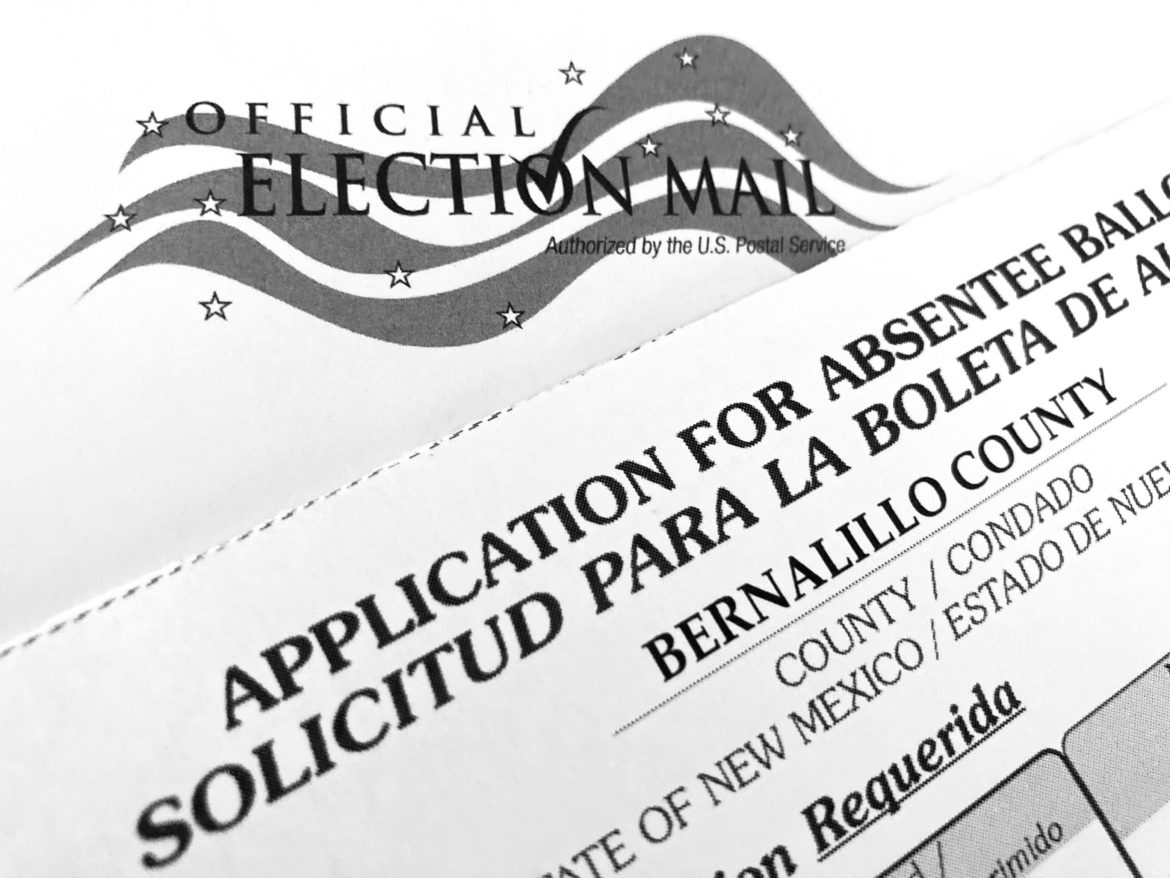 Still, there is anxiety about how the system will handle what many across the political spectrum are calling “the most important election of a lifetime.”  Most believe it will take longer in 2020 to know some of the winners, particularly in New Mexico’s hotly contested southern congressional district. And the presidential election, nationally, appears unpredictable as well.

Across the country, political strategists who have been encouraging absentee ballots for months have recently shifted to pushing early in-person voting. In New Mexico, public officials and advocates have coalesced around a common mantra: Vote early and be patient while the votes are counted.

Walking into the absentee board room on election night 2018 she found workers who had been counting for 17 hours straight.

“One was weeping, and the other’s hands were frozen,” Lopez Askin recalled.

That was the night that some called the race for New Mexico’s southern congressional district for Republican state Rep. Yvette Herrell, who appeared to be in the lead. The next day,  the secretary of state announced that Democrat Xochitl Torres Small had won.

Lopez Askin would rather see “a great turnout spread over the entire month of October” this election than witness the long lines that accompanied primary election day this June.

Still, she’s ready for what may come in November. Usually, 250 people volunteer to be poll workers, but she has 400 people on her list. And she plans to expand her absentee ballot board from 11 people to 40.

Alex Curtas, a spokesman for the secretary of state’s office, is promoting early voting outright. “The best thing that voters should know is vote early,” starting Oct. 17, he said.

On election day, voting in person or returning your absentee ballot to a polling place puts more pressure on the tabulation process, and if turnout is high, that could contribute to a delayed count.

“There are concerns in the public about both absentee and in-person voting for different reasons,” Curtas said. “People should feel safe going to polling places. There will be PPE for all poll workers, they’re following best practices, wiping down and social distancing.”

Former New Mexico Congressman Steve Pearce said he ended up voting in person after he had requested an absentee ballot for the primary because he was persuaded that the precautions made polling places “as safe as going to Wal-Mart.”

“Whatever you’re going to do, do it early,” said Pearce, who is the chairman of the state Republican Party. Whether it’s a flood of voters at the polls on election day or an avalanche of absentee ballots, “It’s the things that come in later that get jammed,” he said.

As for long waits for results, New Mexico officials are reassuring the public.

“New Mexicans should be confident in their election administrators and the democratic process,” Secretary of State Maggie Toulouse Oliver said in a press conference Sept. 24.

Most votes will be counted on election night, but the results won’t be final and that’s normal, she said.

“We’ve never conducted an election in New Mexico, or any other state, where every single vote was tallied and counted on election night,” Toulouse Oliver said.

Several clerks told New Mexico In Depth that even with more hands on deck, the count will probably take longer than anyone would like.

As New Mexico In Depth reported in May, counties drastically reduced the number of in-person polling places for the primary election because of concerns related to COVID-19, creating challenges for voters on tribal lands.

Statewide, voter participation was up 8% from the 2016 primary, but in Native American precincts turnout dropped by nearly 1 percent; it was down as much as 29% at Zia Pueblo and from 17% to 20% in three precincts on the Navajo Nation, according to a post-election analysis by Common Cause New Mexico.

But officials promise it will be easier to vote this fall, in part because the state legislature in June tackled problems that surfaced in the primary with an update to the election code (SB4).

The new measures prevent county clerks from closing or consolidating polling places on tribal land, and require at least one polling location within the boundaries of each nation, tribe or pueblo.

In Sandoval County, four Pueblos went without early voting sites in the primary, for a variety of reasons. For the general election, the county will offer voting centers for early and election day voting on each of the seven tribal lands within its boundaries: Cochiti, San Felipe, Santa Ana, Santo Domingo, Sandia and Jemez Pueblos, and at the Counselors Chapter House.

In San Juan County, the clerk cut election day voting sites during the primary from 27 to six and only two were on the Navajo Nation. For the general election, 33 voting centers, including 13 on Navajo land, will be open on election day.

In McKinley County, early voting sites were cut from seven to five during the primary, with only one, in Crownpoint, on the Navajo Nation. For the general election, that will change, with three of the six early voting centers located in Navajo communities.

But while there will be more sites in Native communities, it still doesn’t fully resolve the difficulties Native voters face.

“That was a good start, but polling places are still too far away for some voters,” said Common Cause New Mexico Associate Director Sydney Tellez. “I appreciate that they’re at least ensuring that there’s one open, but if your polling station is that one fire station [in Newcomb], it can be 50 miles from where you live, at least.”

Other parts of the state where polling places were consolidated plan to return to normal levels this fall. Doña Ana County, for example, cut its polling places nearly in half in June, but all election sites should be open on Nov. 3, Lopez Askin said.

A deluge of mail ballots expected to delay results

Even with a renewed push for in-person voting, election workers will be counting a tremendous number of mail ballots.

Most Americans want to vote early, according to a late-August national poll, and in New Mexico, voting by mail is more popular than ever.

Statewide primary results show most voters, more than 63%, stayed home and sent their ballots in through the postal service, while only 37% voted in person. That’s a huge change from the 2016 primary, when just over 23,000 voted absentee, while more than 117,000 voted early.

But that shift was dwarfed by the behavioral change among Native American voters.

Even in the higher turnout 2016 general election, only 1% of voters in Native American precincts used an absentee ballot; in the 2020 primary 56% did, according to Common Cause. The group’s report speculated that the closure of polling stations and concern about COVID-19 were responsible for the change. If so, that pattern likely will repeat this fall.

There’s anxiety that a bumper crop of absentee ballots will push the election results past election night, as happened in June, when several counties experienced longer-than-usual delays.

“My fear isn’t that the ballots won’t be counted right away. They won’t,” said Tellez. “We’re probably not going to have [complete] results a few days after election night.”

But a significant delay in the final results could reduce public confidence if they’re much different from what they appeared to be on election night, she said. Plus, more than half a million mail ballots were rejected across 23 states during the primary, and if that translates to the general election, it could help decide tight races in battleground states.

Close races and delayed results may be inevitable, but more staff can help.

In Taos County, members of the primary absentee ballot board walked out before midnight election night “claiming that they did not realize how much work was involved, that they were tired and could not go on,” according to documents filed in order to receive an official extension.

Taos County Clerk Anna Martinez said she doesn’t want a repeat performance. After a lack of workers forced her and other clerks to reduce the number of polling places in the primary, a hiring push promoted by the secretary of state for the November election brought in a fresh crop of volunteers. All of the regular polling places in the county will be open, she said.

Martinez also bought drop boxes so voters can submit their ballots in a no-contact way.

And as for the absentee ballot board? “We won’t be using the same people as last time,” she said.