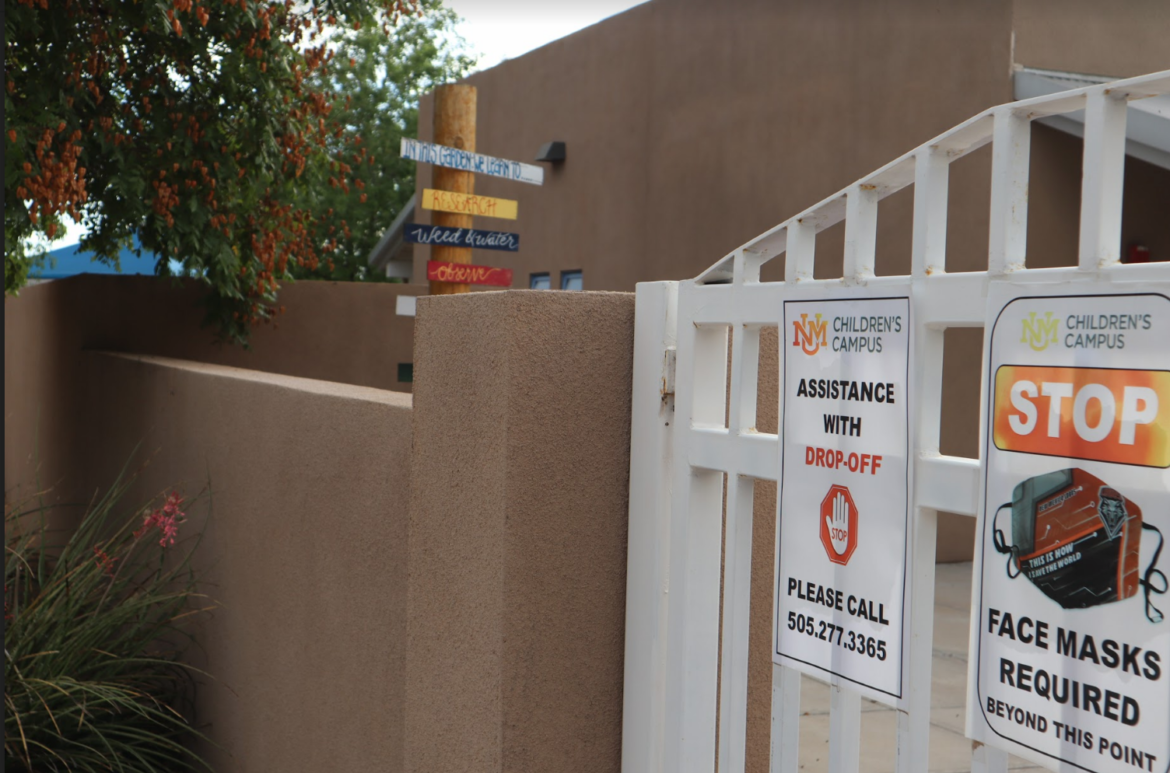 The gate at the UNM Children's Campus notes that face masks are required. Image: Shaun Griswold.

As the pandemic gained steam in mid-March and state public health orders led to a widespread shift from working in the office to working at home, the state grappled with how to safely provide care to children of essential workers and children in the state’s care. The state issued safety requirements that facilities taking care of children would have to follow in order to remain open. Ultimately, 619 of 975 centers, family homes and group homes created safety protocol plans and remained open.   Since then, when positive test results have triggered a shutdown, authorities have discovered very little transmission.

Since March, about 14% of those open New Mexico child care centers have had a staff member, or in the rare instance, a child, test positive, said Elizabeth Groginsky, secretary of the Early Childhood Education and Care Department (ECECD), in an interview. She said positive test returns trigger a rapid response process that includes contact tracing to identify every child that interacted with the person who tested positive.

As a result, more than 1,470 children have been tested, and in nearly every instance, the virus was contained to the initial positive case, in places mostly occupied by toddlers and very young children.

“One of the things that has helped keep the transmission rates low is the grouping protocol, so a positive person does not expose the entire center but only the people in their small group,” Gonzales said.

Other practices in addition to having children keep with small groups throughout the day include smaller classrooms, screening children and staff when they arrive at a facility, social distancing, sanitation practices and requiring both adults and children to wear masks.

Some centers use “kind enforcement” and incorporate masks into playtime to help normalize mask wearing among children. One center uses parental contracts to adhere to COVID safe practices as a way to inspire confidence and bolster safety.

Most positive tests that triggered a rapid response effort have been among adults, Groginsky said. “In a few of those cases we’ve found children are positive, we just don’t know if that spread from the teacher to the child.” she said, “But it hasn’t been that all the children that have been in the classroom with the teachers, have tested positive.”

Before reopening in June, larger classrooms were created for a maximum of 10 children. Six outdoor learning environments were created. It reduced capacity from 104 children to 64, created sanitation plans and learning plans that incorporated social distancing. Parents are not allowed to go inside facilities. Children are dropped off outside where they meet a staff member that escorts them inside the building for a health screening before they go to their classroom “bubble.”

And the center mandated masks for everyone in the building, including children when it reopened in June.

As it turned out, toddlers took to the mask requirement much better than some adults.

“The first couple of weeks were a bit of adjustment, after that they loved it. They’re aware of the social contract to protect each and look out for each other,” Freeman said. “Masks are not a political issue for 3 and 4-year-olds. Nor are they a threat to their freedom or anything else.”

Back at the UNM Children’s Center in Albuquerque, masks have become integrated into playtime.

“One of the kids not only brought in the regular cloth masks, he also decided that he was bringing in his Darth Vader mask for the day.” Baca said. “The kids loved it, if he got tired of that he had the cloth masks but had his mask that he loved for the day.”

Both facilities promote kind enforcement for kids who remove or see their mask slip off.

Freeman said kids even started to enforce their mask requirements among themselves. “If somebody is not wearing the mask they use basic words to help them understand that they need to put their mask on or pull their mask up,” Freeman said. “Something like, ‘let’s keep everybody safe, will you put your mask up.’ We work a lot with language or words. We don’t want anyone to be assaulted by this.”

Personal responsibility isn’t just for the toddlers and staff.

A parental agreement at Kaune requires adults to report to the facility if they’ve come into contact with anyone that tested positive for COVID and they agree to limit potential exposure as best they can.

Freeman said her parents agree to the social distancing, masks and to “leave home as infrequently as possible. Our parents have liked that we all have social contracts.”

Collaboration from everyone involved in the best safety practices to successfully combat exposure has led to a greater trust, she said. “Our parents at this point are much less anxious. They are confident in the safety protocols that we have in place and they are confident that we are overly, overly cautious about implementing them correctly.”

But should a positive case turn up at the Santa Fe center, Freeman can lean on the experience of the UNM Child Care Center and other facilities that have learned from rapid response protocols.

“I think you can put things down on paper and until you actually go through with it you don’t see things that could be modified, for the most part I would call it a success,” Baca said about the 9-day closure at UNM. “The feedback we received from parents and from staff was that they felt it was handled in a very calm and seamless way, they felt it was flawless and that’s all we can ask for.”