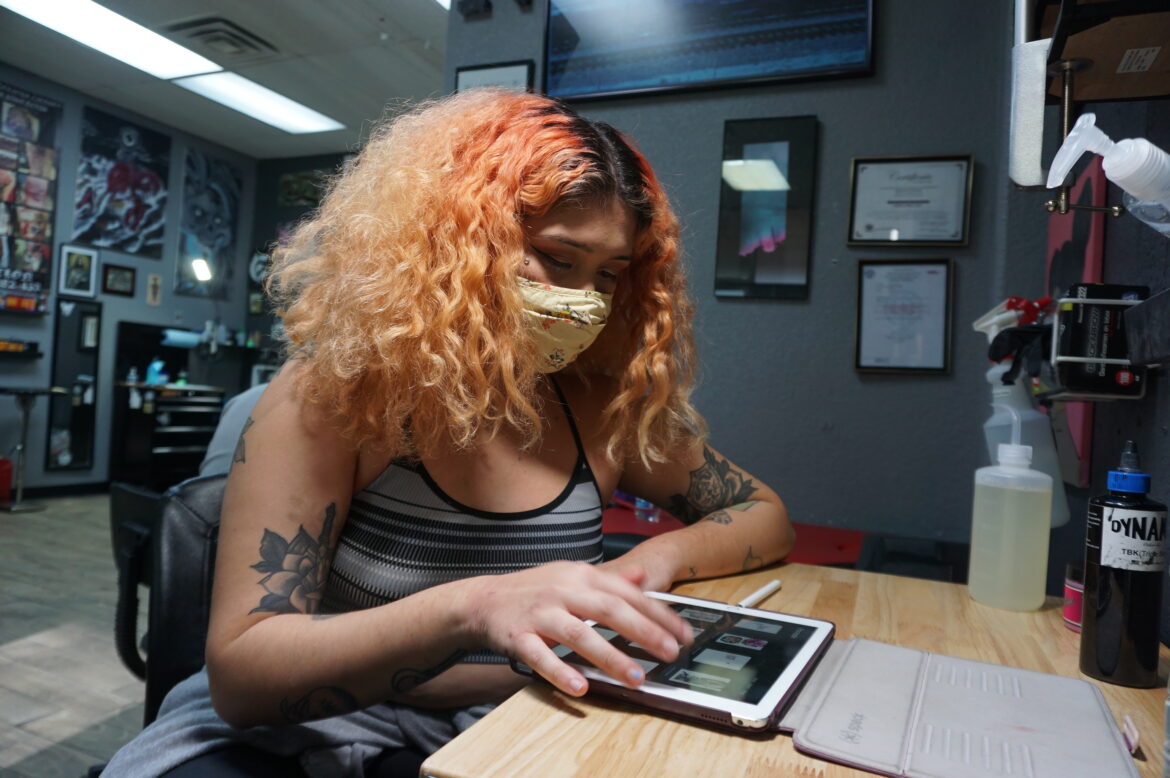 Brittany Clark, a young Mexican-American tattoo artist who grew up in the small border town of Fabens, Texas, recalled two of her classmates coming up to her on a Martin Luther King Jr. Day and asking if she wanted to play.

“They put their hands all in a circle and they actually told me I couldn’t play with them because I was ‘too white,’” explained Clark, now 22.

Her naturally coiled hair and olive skin paired with the last name Clark make her identity ambiguous by nature. While some call her white, others sometimes assume she is mixed — usually Black with some other unidentified ethnicity or race.

Clark grew up in the predominantly Hispanic farming town about 20 miles outside of El Paso, Tex. She never thought of herself as different but as she got older she began to notice how much she stood out.

“In our schools, we go over and we say ‘the Spanish (Mexican) kids, the white kids,’ ” Clark explained. “It sounds bad to say it like that but that’s how people were in school. I wasn’t absorbed by either group. I’m not white-white, I’m not Hispanic-Hispanic.”

Clark’s experience points to the complexity of race in the United States at a time of intense debate and conflict about how to rectify systemic racism experienced by Black, Indigenous and people of color.  From the killings of George Floyd and Breonna Taylor at the hands of police, to the emergence of armed militia groups confronting racial justice protests, to the toppling of public statues that commemorate the Confederacy, the country has been embroiled in a sharp struggle over violence against Black people, in particular.

“Our discourse on race in this country has largely been framed around black or white,” said University of New Mexico civil rights law professor Vinay Harpalani.

But assumptions about varying shades of skin color can, for example, lead someone who is Indian, like himself, to be mistaken as Hispanic, he said.

Academics who’ve studied racial discrimination say discrimination based on a person’s skin-tone exists across many racial and ethnic groups and generally manifests as a systematic preference for lighter skin over darker skin.

Harpalani explains it can be the other way around in some instances, such as the bullying Clark experienced as a child.

Colorism “gives us a broader understanding of race and racism,” Harpalani explained. “It kind of shows how the same ideology of race and racism can be played out within groups and in different ways. As far as skin color goes there’s a hierarchy dating way back… to the days of slavery where lighter-skinned black slaves were treated better.”

The race you see walking down the street

Clark has dealt with people trying to assume her race for most of her life. She remembered a routine traffic stop where the ambiguity of her identity became apparent.

“I had the cop come up to me and he asked me ‘what do you prefer for me to put?’ ” she said. “And he gave me all choices of Hispanic, White or Black. And he told me ‘I didn’t know because of your last name.’ ”

Other times her appearance led to classic examples of discrimination. Clark recalled when a store clerk accused her of trying to steal a hat when she was a teenager.

“I’m going to call the cops if you don’t leave right now,” the clerk told her.

“I was fairly young,” Clark explained “I was about 15 and that was actually the first time I felt super discriminated [against.] People really don’t see people with my hair texture.”

UNM sociology professor Nancy Lopéz and her colleagues look beyond skin color to examine how people’s lives are shaped by assumptions about their race.

Lopez said it’s important to examine the phenomenon of what she’s dubbed “street race,” the race a person is most often assumed to be by others. “If you are walking down the street, what race do you think others, that don’t know you, would assume you were?” asked López.

Assumptions about race can influence a person’s ability to buy a home, access healthcare, get a job, or simply shop in a store without being accused of theft.

“The idea is that if you just look at color we are not looking at your total social status,” López explained.

López explained that street race looks beyond skin color and examines the racial meanings assigned to facial features, hair texture and physical appearance. Features like frizzy hair or smaller eyes can be misleading and can lead people to be miss-racialized. This may lead to further discrimination regardless of the race they identify as.

A 2019 study shows that hair can significantly alter how people perceive Black, mixed-race and Latina women. Several studies have shown that textured, curly hair worn in a natural state is less accepted in majority white spaces and that Black people face bias at work and school because of it.

Discrimination against women of color with curly hair often leads them to alter it in an attempt to fit in or appear more white.

As a young girl, Clark said she was sometimes bullied because of the way that she looked. Classmates stuck gum in her spongy curls and told she had ‘electric-chair hair.’

Clark’s mother began putting her hair through damaging straightening routines in an attempt to manage her unruly locks, a habit she kept until her late teens. For her, changing her hair was a way to alter her street race and the way people saw her.

It wasn’t until she got older and moved away from Fabens that Clark began learning to care for and embrace her hair; showing off her voluminous curls. And she started to see other ways her appearance affected her.

The color of health

There is evidence that a person’s perceived race has a range of effects on the way the public and institutions treat them. Access to equitable healthcare is one prominent example. Studies have shown sharp disparities among racial groups in healthcare. Clark experienced this herself when she attempted to get care for an injury.

In 2019 Clark injured her back in a car accident that left her with a herniated disk that is now permanently fused. Clark is one of the 29.7% of Hispanic-Americans currently uninsured.

“I wasn’t willing to go get seen by a doctor or anything,” Clark said. “It wasn’t until a couple days passed I realized I needed to go see someone.”

Clark said her quality of life decreased drastically as she dealt with constant back pain. It kept her tossing and turning at night, her old pastimes like dancing and concerts became too painful, and her work began to suffer.

While she eventually received medical care, finding a doctor who would take her seriously proved challenging.  She sought out multiple doctors, explaining that the pain was real, arguing with them in attempts to convince them she was genuine.

“I think it’s a little bit of everything, my medical history, my tattoos, how I look,” Clark explained. “I did have a woman nurse one time tell me the pain I had was, like, invalid and she said I was probably doing something wrong.”

Clark’s hunch is supported by research.

Studies show that racial minorities are less likely to receive advanced medical procedures and testing. These same groups often underutilize mental health services and preventative care. Reports have also indicated disparities in emergency room care as non-white patients are more likely to have higher wait times and are less likely to be admitted. These same patients are also less likely to receive pain medication when presenting with abdominal pain. Black and Native women face their own unique challenges as they are two to three times more likely to die from pregnancy-related complications than white women.

Racial minorities also face the daunting task of seeking care in medically underserved communities like El Paso. As COVID-19 has begun to overwhelm the city’s hospitals and medical resources, treatment for chronic illnesses like Clark’s has become even more sparing.

Further studies conducted by Lopéz and her colleagues at UNM found that there are disparities in the way people of color experience their mental and physical health, particularly among those that are perceived as Mexican.

Harpalani explained that it is harder to track information on skin-color discrimination because unlike race, skin color is not categorized in government data.

Scholars like López and Harpalani say it’s necessary to understand the history of racial discrimination to solve the issues that live on today. Many ideas about race are rooted in colonization’s political and social structures which were based around the idea that people with European backgrounds were superior.

There has been a long history of confusion in distinguishing between discrimination based on race and on color, which are distinct, said Harpalani, specifically when it came to civil rights laws. In the 19th century, the law didn’t distinguish between race and color, he said. The Civil Rights act of 1964 led courts to group people based on race, leaving out skin color.

The rapidly growing Latino population in the United States is highly diverse and is challenging that paradigm. Lopez said skin color can vary from light to dark even within families. Some may identify as AfroLatino or Indigenous Latino. Given these complexities, Harpalani said, it’s crucial for “civil rights activists to collect data on skin color discrimination and employ creative legal strategies to address it.”

Currently a journalism student at New Mexico State University and New Mexico In Depth's 2020 southern New Mexico academic fellow, Claudia Silva recently obtained her associate’s degree from El Paso Community College and is the former lead editor of their student-run newspaper the Tejano Tribune. Claudia grew up along the Texas, New Mexico, and Mexican border and is passionate about the issues affecting the area.