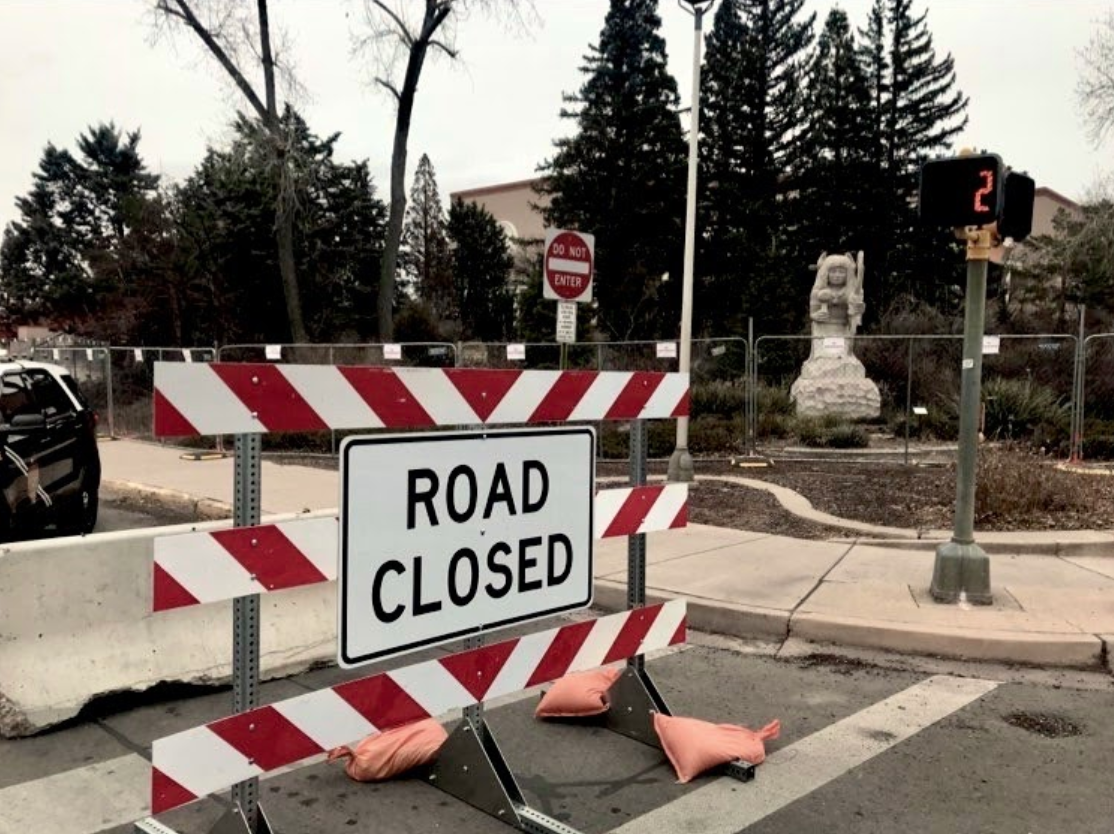 The Roundhouse surrounded by a chain-link fence and security, as 2021 legislative session kicks off. Credit: Sid Childress

New Mexico’s legislative session begins today against an odd backdrop of optimism,  uncertainty, and vigilance, all at once.

Planning for a largely online session has long been in the works, with the public barred from the Roundhouse until the COVID-19 pandemic is brought to heel. Now, the Legislature finds itself launching a session grappling with the twin challenges of a deadly pandemic and the spectre of violence, and no one knows exactly how it will turn out.

The Roundhouse has been abruptly fenced off in the wake of the Jan. 6 insurrection in the nation’s capitol and subsequent warnings by the FBI that armed protests may occur across the country in the lead up to the inauguration of President-Elect Joe Biden Wednesday. Only approved lawmakers, staff or others with specific credentials, like media, will be able to enter, through checkpoints. In Santa Fe, national guard and state police are out in force to handle armed protests and possible violence.

Perhaps it’s easy, given the eerie backdrop, to forget for a moment that lawmakers have a full agenda for the 60-day session, and are charging full-steam ahead.

The 2020 elections changed the makeup of the Senate significantly enough that long sought goals will likely be realized this year, as long-time more conservative Democrats who controlled powerful committees lost their reelection bids. The new look of the Legislature signals the advent of a robust period of more progressive and unified Democratic governance.

Legislative leaders and the governor, all Democrats, express optimism about legalizing recreational cannabis; ridding the books of a criminal abortion law; and giving voters a chance to endorse tapping the state’s massive sovereign wealth fund to expand early education, and potentially K-12 education. And there will likely be bi-partisan support for pandemic relief measures targeting small businesses.

In a normal year, those of us who follow the Legislature would be focused on shifts in priorities, on who the new power brokers are, and how the Republican party, in the minority, might find opportunity to monkey wrench legislation.

We also would look at just how far lawmakers would be willing to go to democratize and make more transparent the legislative process before the “party of incumbency” kicks in with its  orientation for secrecy and control.

But this isn’t a normal year. While we’ll definitely follow how much lawmakers get done, also at the forefront for us is an unprecedented lack of access to lawmakers. The Roundhouse is closed to the public, and the bulk of the session will be conducted online. There’s little guidance to the public on the legislative website about how they can participate. We’ll know more after today when both chambers meet to pass rules for how they’ll conduct committee and floor sessions over the next eight weeks.

Legislative leaders come with a positive spin, saying that with committees being conducted online, more people will be able to participate. The idea is that those folks around the state who could never come to Santa Fe will now be able to comment during committee hearings from their homes.

Republican lawmakers have pushed back on this idea, pointing out the low internet connectivity in rural parts of the state, and generally poo-pooing the notion that remote, online meetings will provide more public participation. Republican leadership urged legislative leaders to postpone the session for this reason.

We tend to agree that public participation will suffer this year. That’s because access isn’t just a matter of talking for a minute in a committee room. It’s also about being visible in a committee room throughout debate on an issue. Or speaking one-on-one with lawmakers in the hallways. This is so important that busloads of people travel to the Roundhouse every year for that purpose.

In fact, there’s a general uncertainty this year across the spectrum, perhaps most illustrated by hesitation among some advocates to push for certain measures, because they won’t be able to work closely with lawmakers as legislation wends its way through committees and in the process becomes changed.

We don’t know what to expect, it could run really smoothly and the public may find out they’re able to effectively participate online. Or, it could blow up, with lawmakers deciding to cut the session short or postpone it for later in the year. New Mexico In Depth plans to tune in throughout the session, whatever it brings. You can as well, through the legislative website: nmlegis.gov.

This article was first published in New Mexico In Depth’s newsletter.