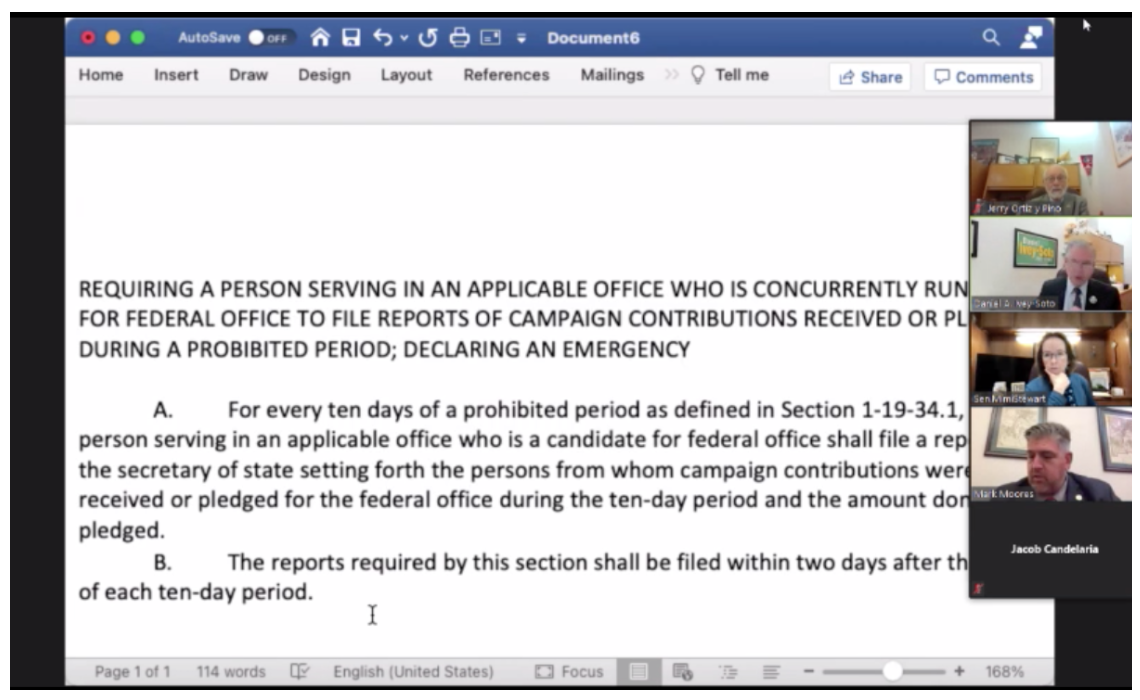 Legislators are barred from soliciting campaign contributions while the Roundhouse is in session– unless they happen to be running for Congress.

During the state’s prohibited fundraising period, lasting from January 1st to the end of the session, lawmakers may not solicit any campaign contributions and lobbyists may not donate to any state campaigns. But federal campaigns aren’t subject to state law.

This means four Democratic state lawmakers running for an open congressional seat may fundraise at the same time they’re conducting state business during the 2021 legislative session. New Mexicans won’t officially know who contributed to them until after the session.

“The original intent of having a prohibited period for state lawmakers was so that the public wouldn’t have the perception that lobbyists were literally giving our elected officials money for their state campaigns while they’re in the middle of a legislative session,” said Heather Ferguson, executive director of Common Cause New Mexico.

On Wednesday, the Senate Rules Committee unanimously endorsed a bill sponsored by Sen. Jacob Candelaria, D-Albuquerque, that would require state elected officials running for federal office to disclose their donors every ten days during the prohibited period. An outside expert questions whether the state has the power to require candidates to disclose their fundraising outside of regular federal reporting requirements.

And though they aren’t currently required to, two of the four lawmakers agreed to disclose their fundraising to New Mexico In Depth, while two others did not.

They join several other candidates in the race, including Democrats Victor Reyes and Randi McGinn, Republicans Eddy Aragon and Michelle Garcia Holmes, and independent Aubrey Dunn. Who eventually shows up on the ballot will be determined by political party committees, there will be no primary election.

Presumably, all of these candidates are fundraising, including the lawmakers who are currently working to pass laws during the legislative session. As the State Ethics Commission explained in a recent advisory opinion, state laws enacted to safeguard against corruption cannot apply to federal candidates or campaigns.

Additionally, while lobbyists are required to report expenditures over $500 during the session within 48 hours, Secretary of State spokesman Alex Curtas confirmed that those rules do not apply to congressional campaigns that they may contribute to. Thus, voters will have to wait until April 15th, the next federal filing deadline, to find out whether lobbyists seeking to influence the legislative process contributed to the four campaigns.

“That is a really unfortunate situation I believe the state finds itself in,” said Candelaria in an interview. “Our state’s clear interest in preventing undue influence is simply swept aside.”

Candelaria introduced a bill that first sought to ban all solicitation of contributions–– including for congressional campaigns–– during the legislative session, which would have gone into effect immediately.

“I think the public needs to understand just how bad federal campaign finance law is, in many respects, and how it ties the hands of the Legislature from enacting very common sense campaign finance reforms,” said Candelaria.

But because it would likely be found unconstitutional for a state to bar a federal candidate from fundraising, he switched gears to focus on public transparency instead.

The Senate Rules Committee unanimously passed a substitute measure today that would instead require legislators running for federal office to file reports every 10 days during the prohibited period, detailing who gave or pledged to give to their campaigns.

“I believe this approach is not preempted by federal law because it does not conflict with federal law,” said Candelaria during the hearing to explain why he believes the bill wouldn’t run afoul of the constitution. “Filing of these reports does not frustrate, preclude or prevent an individual running for federal office from enjoying the full scope of their rights under the First Amendment and under federal campaign finance law.”

But Austin Graham, legal counsel at the Campaign Legal Center, a Washington-based organization that advocates for tighter regulation of money in politics, is skeptical that even disclosure would be allowed, should it be challenged in court.

“There might be some creative way to get around it that I’m not thinking of,” said Graham. “But I think it’s going to be tricky to try to require these state legislators to disclose anything about their federal campaigns to the state and not run into the express preemption provision within the Federal Election Campaign Act.”

New Mexico In Depth asked all four of the current lawmakers hoping to fill Haaland’s seat for comment on this disclosure gap and asked, for the sake of transparency, to see their donor lists as well.

Rep. Patricia Roybal Caballero’s campaign was the most forthcoming, disclosing all 32 of her campaign’s donors immediately to New Mexico in Depth. Her donor list reveals support from local officials like Albuquerque City Councilor Pat Davis and former Bernalillo County Commissioner Maggie Hart Stebbins, as well as the President of the League of United Latin American Citizens (LULAC) and a Texas state senator from El Paso.

She also received a $50 contribution from Marshall Martinez, interim executive director of Equality NM and a registered lobbyist on behalf of that organization.

“Because I was focused solely on the fact that it was a federal campaign, I forgot about the session fundraising prohibition,” said Martinez, explaining that Rep. Roybal Caballero, a long-time friend, called him and he’d forgotten about the prohibited period.

“It’s not the most ethical thing to do,” he said about his donation, reiterating that the contribution was personal and not on behalf of Equality New Mexico.

Sen. Antoinette Sedillo Lopez’s campaign agreed to disclose all contributions made since January 1 above $200, since that’s the threshold for disclosure set by federal campaign rules.

“I just don’t know whether those people are expecting privacy or not,” said her spokesperson, Victor Lopez, referring to those who had contributed less than $200.

In an email, Sedillo Lopez reiterated a prior pledge she had made not to solicit contributions from lobbyists during the session, adding that she’d limited her solicitations to emails and social media posts as well as out-of-state contributors without business interests in the state.

Melanie Stansbury: Did not provide

Georgene Louis: Did not provide

See the emailed replies received from the four lawmakers about undue influence and disclosure.

Both Rep. Melanie Stansbury and Rep. Georgene Louis responded to New Mexico In Depth’s request by simply saying they’d disclose as required by law, and did not respond to further requests for voluntary disclosure.  That means the public will not know who’s contributing to their campaigns until mid-April.

Asked whether they would be in favor of increased disclosure measures in light of the situation, all campaigns except Louis’s said yes.

“I have run grassroots campaigns my entire life. I am unlikely to be the top fundraiser and have no issue with higher standards of transparency,” said Roybal Caballero.

Sedillo Lopez said she supported greater disclosure during the session with the caveat that those rules apply to all candidates, not just sitting lawmakers.

Stansbury’s campaign replied that she would favor increased disclosure, “of course,” but did not reply to New Mexico In Depth’s question about who has funded the campaign to date.

Louis said she supported transparency, but didn’t otherwise remark on whether there was a need for greater disclosure about her fundraising for federal office, or disclose her funders.

Sen. Candelaria emphasized that he was not seeking to target the four legislators in particular with his bill, but is seeking to uphold the principle of disclosure.

“This is not about individual candidates, this is about our system,” he said. “And this is about ensuring that there are not dark areas of our campaign finance law where folks can conduct activity that they would otherwise be unable to.”