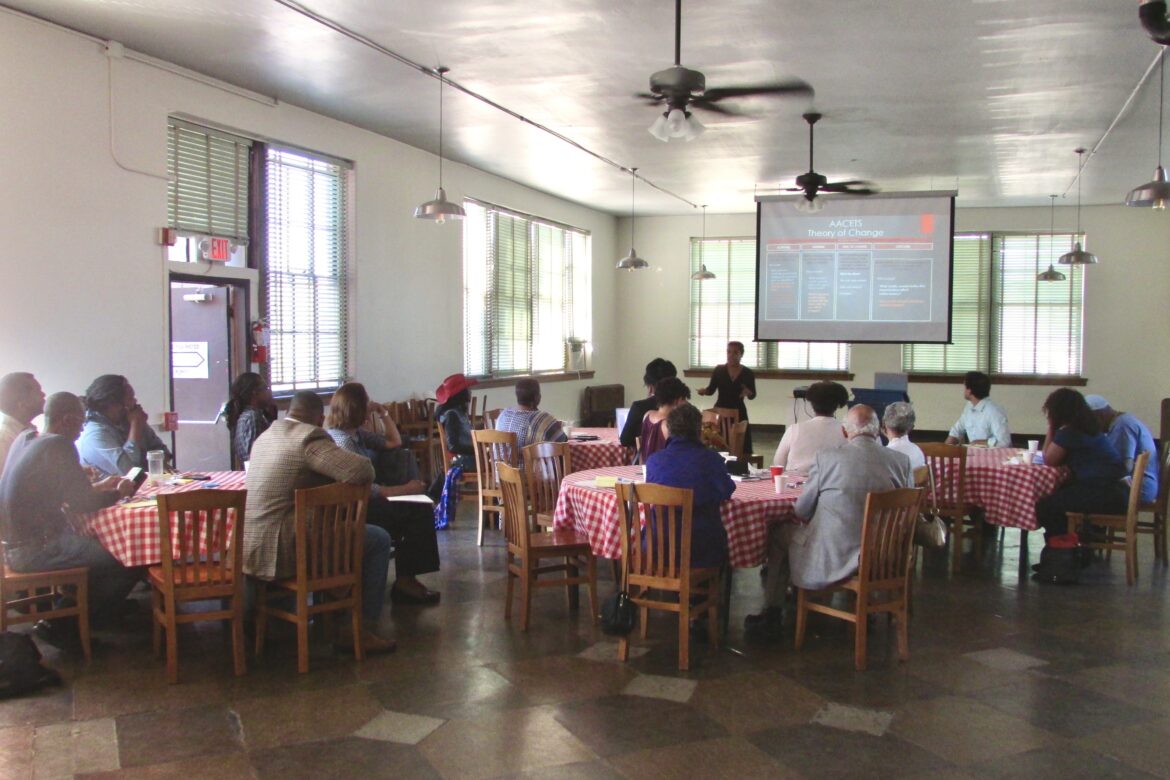 In popular mythology, New Mexico is a “tricultural” state–– one where Hispanic, Anglo, and Native American communities live in relative harmony, an exemplar for the rest of the nation.

But the persistent myth leaves out other groups with long histories in the state, appearing in state-produced documents as recently as 2019. Then, there were contentious remarks at a very public forum this February that led Black leaders to call for a formal statement from the Legislature denouncing the remarks.

Black community leaders issued a statement characterizing Baca’s words as racist and calling on legislative leaders to issue a formal denouncement. At a later committee hearing, Baca said his remarks to Smith were insensitive and apologized. But the prominent episode showcased how the myth marginalizes communities outside the three groups, advocates say.

“We’ve always had a place here, we just haven’t been seen,” Mason Graham, the special projects lead for the New Mexico Black Voters Collaborative, said. “It does come from that kind of thinking, that African Americans–– being such a small population in New Mexico–– don’t have as much of an impact, they don’t have much of a voice or enough of a voice to make a change, which is just not true.”

There are approximately 55,000 Black people in New Mexico, according to the U.S. Census. About half live in the Albuquerque metropolitan area.

The voter collaborative, which is a project of the New Mexico Black Leadership Council, hopes to raise the community’s profile in New Mexico’s public imagination as a way to combat what they see as the continuing invisibility.

In a step toward that goal, the organization will hold a public forum along with several partner organizations next Tuesday for candidates vying to fill the Albuquerque-centered congressional seat formerly held by Interior Secretary Deb Haaland. They say it’s an opportunity to raise issues important to their communities with the person who ultimately will represent them in Congress while building their political power in the state as well.

In Cathryn McGill’s telling, the Leadership Council arose in 2019 out of an acute need to challenge the tricultural myth, which allows issues affecting Black communities to go unnoticed.

McGill, now the CEO of the group after years leading the New Mexico Black History Organizing Committee, describes in an informational video a major goal as “changing the state’s tricultural narrative.”

Beyond erasing Black communities from the cultural landscape, the tricultural myth has also undermined the ability of Black civic groups to acquire needed resources. “It’s been a real struggle for Black organizations to actually get that funding,” said Pamelya Herndon, CEO of KWH Law Center for Social Justice and 1st Vice President of the NAACP of Albuquerque.

Most Black-led organizations in the state have been volunteer-run, as opposed to operating with paid staff, which has prevented organizations from investing full time in their work, McGill said.

After the W.K. Kellogg Foundation made New Mexico a priority in 2008, McGill said she noticed the tricultural myth reflected in grants made by the large foundation.

“When I saw that, I thought, wow, what about the Black community?” she said. “We have these really pressing needs. We also have a great deal of fantastic human capital, and if we’re going to build something that is inclusive of everyone, then we need a fighting chance to be able to do that.”

“I give a lot of credit to Cathryn for her diligence in helping to foster a stronger relationship between the Kellogg Foundation and Black communities throughout the state,” said Robby Rodriguez, who was a program officer for the foundation’s New Mexico programs at the time.

“There was a recognition that our work exists in a context in New Mexico, and that one of the parts of that context with regard to racial equity is the tricultural myth,” he said.

According to advocates, it was important that the study be produced by and for Black communities.

“There’s always another study coming out, saying what the Black community needs in our state,” Hakim Bellamy, the CEO and founder of Beyond Poetry, LLC and the inaugural poet laureate of Albuquerque. “What if we first identify our own problems, and not have some outside group or some consultant come in and tell us what’s wrong with us?,” said Bellamy, who helped lead the research team in 2014.

That study ultimately identified the need for a “hub organization” to support the community, as well as leadership development programming and a more robust communications infrastructure. Out of that emerged the Leadership Council, which was established with support from a range of foundations.

In a statement, Chamiza Pacheco de Alas, director of Kellogg Foundation’s New Mexico programs, noted that efforts to advance racial equity are part of the foundation’s “DNA” and that support of Black-led organizations will continue to grow.

“This is an area of growth and opportunity for us in New Mexico, and we feel fortunate to have the support and expertise of local community leaders,” she said.

A movement versus a moment

The past year has seen broader attention to police violence, systemic racism, and disproportionate health outcomes faced by Black people in light of the pandemic. Particularly after the killing of George Floyd, the country as a whole began to pay greater attention to issues already well-known to Black people.

“It was time for white people to actually stand up and say, enough, we’re not going to take this anymore. And we really did need our white brothers and sisters to work beside us,” said Herndon. “So we saw more outpouring in terms of financial resources that were there to support African American organizations.”

“It makes it important to other people now,” remarked Bellamy.

At the same time, it would be a mistake to confuse the work done by Black civic leaders with recent protests for racial justice. While the latter can bring greater attention to the former, McGill emphasized that the work Leadership Council does is systemic and long-term.

“I think that people often conflate protests with movements,” said McGill. “Protests are part of movements. But in some respects, when people focus just on the protests and not on the reasons for them, what it’s distilled into is making it a moment, and not a movement.”

“So what we say is that this is a movement, and not a moment.”

One project the group undertook was civic engagement within Black communities to build political power in the state.

Last year saw the election of more Black candidates to positions in state government than before.

Judge Shammara Henderson was elected to the New Mexico Court of Appeals following her appointment earlier in the year, making her the first Black woman to win a statewide election in New Mexico. Additionally, Sen. Harold Pope, D-Albuquerque, became the first Black state senator in state history. “It was really important to have that happen,” said Herndon.

“We’re taking the next step into saying we want to be a political player and host these conversations,” said Bellamy about the upcoming candidate forum. “It’s kind of the only way we’re going to get our questions asked or answered.”

“There are problems that are really unique to the Black community that don’t get resolved by some broad educational equity bill, or small business bill,” he said. “We actually need solutions that are as specific and acute as the problem.”

McGill said organizers will raise voting rights as an issue at the forum, alluding to recent voter suppression measures passed in Georgia. “We want to find out, truly, what do you believe about people’s right to vote? What will you do as a representative to protect it? And do you think that what’s happening right now is appropriate?”

“We have an opportunity to see these candidates not giving us canned responses. I think we’ve all had enough of that,” she added.

Heather Ferguson, executive director of New Mexico Common Cause, which has partnered on the forum, agreed. “I think it will be really telling for the public to be able to get these people on record about where they stand on what is so clearly a national focus right now.”

“There’s always that kind of toss-away of, well, there’s not a lot of Black people in New Mexico anyway,” said Megan Bott, the former marketing and communications manager with the Voters Collaborative. Bott currently sits on the board of People Requiring Equality within Systemic Systems (PRESS) New Mexico, a community based group that combats systemic racism and is a partner for the candidate forum. “If anything, it means that we need to make sure our voices are heard even more, because we lack representation.”

The candidate forum, they say, offers an opportunity to work together with the Black community.

“Obviously, both communities are under attack right now,” said Moira Tañedo, an intern with the organization. “We’re coming together in order to find a representative to voice our communities’ concerns.”

Their community grapples with the tricultural myth as well.

“The lack of language access in this state is the biggest example of that,” said Huong Nguyen, community engagement director for the group, explaining the difficulties some in the community run into when dealing with state agencies that don’t make documents available in languages beyond English, or even Spanish.

Nainika Ravichandran, also an intern, added that the “model minority” myth–– which holds that Asian Americans are generally well-off compared to other minority groups––  was also key to the relative neglect of their community. “I think that in combination with the tricultural myth, this really makes it really hard for the Asian American community to receive resources and representation.”

Sponsors say the candidate forum is an opportunity for communities typically left out by the tricultural myth to have their voices heard by the individuals seeking to represent them in Congress, while also providing voters crucial information about the election.

“When else do we have an opportunity–– because of the nature of how fast this election has to happen–– for the interests of the African American community to have center stage?” said Bellamy. “It is a ripe opportunity to get the needs of Black children and families in front of the folks who will represent us for years to come.”