New Mexicans who care about child well being and the state’s newest agency — the Early Childhood Development and Care Department — woke up to good news Friday morning.

As you might remember, the agency launched a year ago with a trust fund valued at more than $300 million to help pay its way. Expectations were for the fund to grow to $1 billion over 10 years, if lucky. (The agency won’t directly tap into the fund to pay for expenses. Instead, the interest earned by the trust fund will help to finance the department’s spending.)

So much for the low-ball projection. Word came Friday morning that the Early Childhood Trust Fund, as it’s known, is about to double, to nearly $650 million, thanks to booming tax collections and a strong recovery in the oil and gas markets following the COVID-provoked collapse of 2020.

Nearly $335 million in excess cash — basically, surplus dollars from what the state took in over what it spent during the state fiscal year that ended June 30th — will flow to the trust fund. For a state that constantly ranks at the bottom of child well-being indexes, the larger-than-expected cash infusion is good news in a state desperately looking for it around children and health. Look for the new dollars to likely help the fledgling agency develop a strategic plan to attack some of the state’s perennial challenges.

More long term, the $335 million investment “puts us at a rocket pace” for growing the fund, Democratic House Majority Whip Doreen Gallegos of Las Cruces said Friday afternoon. Gallegos led the legislative charge to create the Early Childhood Trust Fund over several years until it was passed in the 2020 legislative session.

And that’s not all for the good news. Economic predictions project continued good times for New Mexico, with the potential for an additional $930 million to go to the trust fund next year, according to a brief from the Legislature’s budget arm, the Legislative Finance Committee. 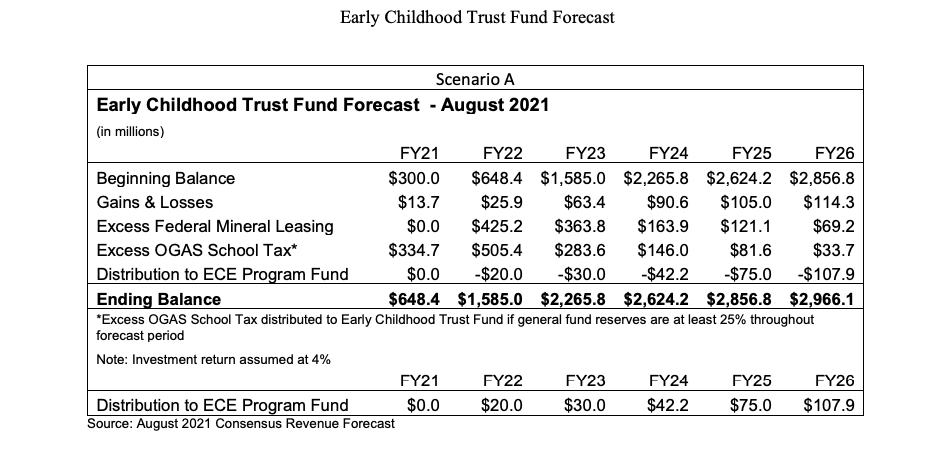 That $930 million figure is not a certainty, of course. The oil and gas industry is notoriously volatile. A drop in production could affect the state’s tax collections, which, in turn, would affect the amount of new money flowing to the trust fund.

In addition, the state of New Mexico has many unmet needs — vacancies across state government, needed dollars for Medicaid, the government’s health insurance program, boosted public school spending demanded by a landmark 2018 court ruling, road maintenance. So much so that state lawmakers likely will debate whether squirreling nearly $1 billion away into a trust fund next year is the best use of the money.

That coming debate was much on the mind of Democratic Rep. Patricia Lundstrom on Friday afternoon. Lundstrom is the chairwoman of the state House of Representatives budget-writing committee.

“We have a lot of bills that need to be paid,” the Gallulp Democrat said. “We need to be cautious.”

Lundstrom is wondering whether a cap is needed to restrict how much money can flow to the Early Childhood Trust Fund each year, given that economic forecasts predict strong showings by the oil and gas industry for the next few years. A robust oil and gas industry heightens the chances for similar eye-popping infusions.

Gallegos said she understood Lundstrom’s counsel for caution. “We have to look at the state as a whole,” the Las Cruces Democrat said. “Patty and those looking at appropriations — they’ve got an important job to do.“

“The stars are aligning,” Gallegos said of the fund’s windfall. “New Mexico’s kids deserve to be billion dollar babies.”