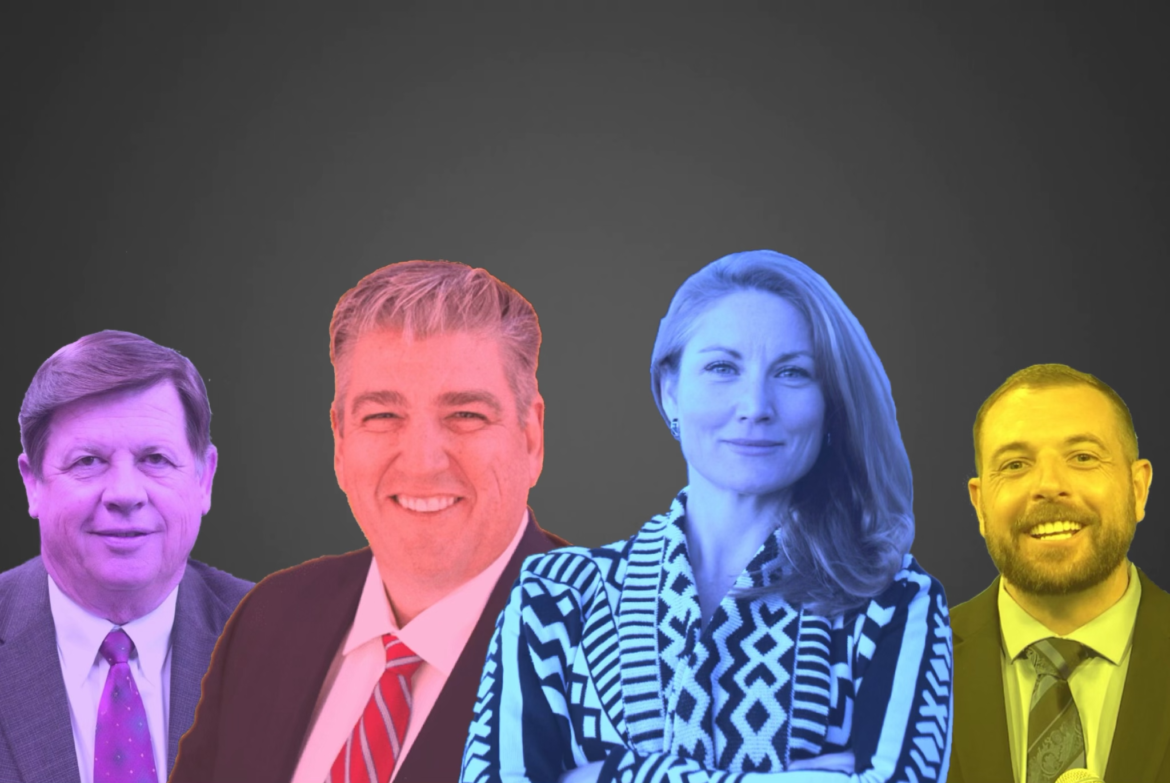 That fell to a few hundred party insiders who picked candidates, one of whom will emerge victorious on June 1 to represent roughly 690,000 New Mexicans in Congress. In New Mexico, the organizing committees of political parties select their candidates for special elections, and this year’s process created a spectacle for both Democrats and the GOP.

On the Republican side, a state senator offered to run two weeks before the selection and won the insider vote. On the Democratic side, candidates sought to get their supporters elected to their party’s selection committee, then garner support from a majority of those 200 insiders.

The stakes are high. Whoever wins next month’s election is likely to hold the seat for a long time.

“No one who’s ever held this seat since its existence has ever lost an election in this district,” said Brian Sanderoff, a prominent New Mexico-based political analyst and pollster. “You either die in office, or retire, or move on to higher office.”

Democratic nominee Melanie Stansbury received 103 votes from roughly 200 Democratic state central committee members, while Republican Mark Moores received 49 votes in his party’s process. Chris Manning was nominated with just 18 votes at the Libertarian convention, while independent Aubrey Dunn said he turned in just under 6,000 signatures to get on the ballot as an independent.

Stansbury, a state representative first elected in 2018 after flipping a Republican-held Northeast Heights district in Albuquerque, has run a campaign based in progressive Democratic issues, like universal healthcare and climate change. Emphasizing her local roots and her background in science and water issues, she frequently espouses “investing in our communities” and addressing issues such as crime and immigration in a systemic manner. She hasn’t hesitated going on the attack, dinging Moores for his recent votes in the statehouse against abortion rights and paid sick leave. In addition to serving at the Roundhouse, she works as a consultant for foundations, environmental nonprofits, and the University of New Mexico.

Moores, elected to the state senate in 2012 and the only Republican to represent an urban Albuquerque district in that chamber, emphasizes his roots in northern New Mexico and background as a UNM football player. He presents himself as a champion of small business and the police. While he has a reputation at the Roundhouse for collegiality, in this race Moores has set a different tone, describing his opponent as a “radical extremist” while highlighting Albuquerque’s crime problems. “Albuquerque is burning,” declared Moores in a recent interview with New Mexico in Focus. Moores is a co-owner of a Roswell-based medical diagnostic testing business that was an early processor of COVID-19 tests in New Mexico.

Dunn previously served as the state’s land commissioner from 2015 to 2019, a fact that he hopes will give him the name recognition necessary to win the race. In TV ads, he’s sought to portray himself as above partisan politics, though he’s previously run for office as a Republican, then as a Libertarian, before going independent for this race. Dunn’s presence in the race has complicated things for Moores, who reportedly asked Dunn to drop out of the race.

Manning, a veteran who lives near Farmington and ran as the Libertarian nominee in the third congressional district in 2018, has run a recognizably Libertarian campaign, calling for an end to qualified immunity and the war on drugs, while maintaining conservative stances on issues like guns, abortion, climate change and healthcare.

President Joe Biden won 60% of the vote in the first congressional district, making it arguably the most Democratic in the state.

“Recent election history tells us that holding all things equal, the Democratic candidate tends to have an advantage, and that the Republican candidate would have an uphill battle,” said Sanderoff.

The primary election that wasn’t

On December 17th, then President-elect Biden nominated Haaland for Secretary of the Interior.

The insider nomination process faced criticism from the beginning, spurring an unsuccessful legislative effort by state lawmakers to force a full primary vote once Haaland was confirmed.

“It’s a process that is complex, and not designed for inclusion,” said Rep. Daymon Ely, D-Corrales, who co-sponsored the bill with Moores, before he tossed his hat in the ring.

Meanwhile, as Haaland’s federal confirmation process dragged on, it became clear that a newly-elected state central committee, rather than the one in place in December, would be voting on the Democratic nominee.This presented an opportunity for candidates to recruit their own supporters to join the committee that would decide the eventual winner.

“It was convenient that this election coincided with the selection process of a new state central committee,” said Victor Lopez, Sedillo Lopez’s son and an organizer for her campaign.

Sedillo Lopez held a series of virtual workshops in February to educate Democratic voters about how to get on the party’s supreme decision-making body. It paid off. Sedillo Lopez won the first round of voting, and lost to Stansbury by a hair in the second. Other candidates also attempted to shape the selection body. McGinn published a tutorial about how to win a seat on the committee on her website, and garnered third place in the first round of voting.

But there were also advertising campaigns aimed at the public.

“It definitely turned my head when I saw TV ads running to persuade 200 people,” said Sanderoff.

Sedillo Lopez spent just over $1,000 per first round vote. Stansbury, who went on to win the nomination, spent more than double that. Victor Reyes and Randi McGinn spent about eight times more than Sedillo Lopez per vote.

On the Republican side, the nomination process saw local radio host Eddy Aragon leading a field of relatively unknown candidates. Then Moores entered the race and secured about 40% of the vote at a Republican state central committee meeting that took place less than two weeks after he announced.

Unlike the Democrats, the Republicans didn’t have a second round of voting.

Democratic state central committee data obtained by New Mexico in Depth reveals previously unknown details about how Stansbury won the party’s nomination on March 31 after finishing over 30 votes behind Sedillo Lopez in the first round the day before.

The state representative took the lion’s share of McGinn’s supporters and convinced five of Sedillo Lopez’s supporters to back her instead in the runoff.

Had just a handful of members cast their votes differently, the Democratic nominee–– and possibly the next U.S. representative for metro Albuquerque –– might have been Sedillo Lopez.

Ahead of the state central committee vote in March, New Mexico in Depth asked candidates what they thought about the lack of broad voter participation in selecting the party nominee. Most were critical of the undemocratic process.

Despite the lack of a primary, Sanderoff said both the Democrats and Republicans nominated “formidable candidates” who would’ve done well in a primary election.

The winner of this election has the potential to hang onto the seat for a long time.

“I think the power of incumbency is strong,” said Sanderoff. “Those who have held this seat over the years have maintained a certain level of popularity, for the most part, allowing them to oftentimes move on to higher office.”

Being a member of Congress versus a mere congressional candidate comes with significant advantages.

“They have the name recognition, they’re in office, they have perks that come from the office that give them a lot of free advertising and makes them appear perhaps less partisan than they are,” said Lonna Rae Atkeson, a political science professor at the University of New Mexico. “Therefore, they get more support than they would in an open contest like the one we’re having now.”

Ultimately, the results of the race are likely to hinge on voter turnout, which is unpredictable in special elections.

“It’s really hard to know,” said Sanderoff about how many people will vote. “I think it’ll be significantly lower than the most recent general election. It’s the only thing on the ballot, it’s in the summer, and it comes up quickly. As to how low, we don’t know yet. It’ll depend on how interesting the race becomes.”

As for Rep. Ely, who says he will not run for re-election, reforming the nomination process for special elections continues to be a priority for him.

“I’ve got one session left. Obviously, it’s one where the governor’s got to put it on the agenda,” he said, referring to next year’s 30-day session. “I am still motivated to change this process, because I do think it’s an undemocratic process. I just think on principle, it’s a bad process.”

State of the Race by the Money

Campaign disclosures filed last month offer a glimpse of what the state of play, money-wise, looked like at the beginning of the special general election on March 31st.

Moores reported raising just over $250,000, most of which he loaned to his own campaign. He also received over $22,000 from fellow Republican lawmakers, including personal contributions and transfers from campaign committees.

Moores recently told the Albuquerque Journal that he made the loan to his campaign in order to “catch up”–– noting that Stansbury had been fundraising for her congressional campaign during the legislative session–– though he’d previously told the Santa Fe New Mexican that the money had come from “oil and gas companies and personal friends.”

Stansbury raised just over $200,000, largely from individual contributions, while Aubrey Dunn reported raising over $70,000 that he had largely loaned himself as well. Manning did not report any campaign contributions prior to March 31st.

The significant level of self-funding in the race, particularly by Moores, may have been a play to attract further investment in the race from outside groups.

“A lot of people don’t want to invest big money unless they see that money could be well spent,” said Sanderoff, noting the lack of national Republican investment in the race so far. “So Moores has to demonstrate that he can be competitive in order for the money to flow.”

One more fundraising report will be filed before the general election, due May 20. But so far, there has been a notable absence in outside spending, which is required to be reported to federal election officials within 24 to 48 hours.

Complicating Moores’ path to victory is the candidacy of Dunn.

“Having an independent candidate in the race was not good news for Mark Moores,” said Sanderoff. “Every vote that Dunn gets is a lost opportunity for both Stansbury and Moores. But Moores needs to pick up more of that independent vote in order to have a chance, because of the voter registration advantage that the Democrats have in this district.”

Update: This story has been updated to note there will be one more fundraising report filed prior to the general election.