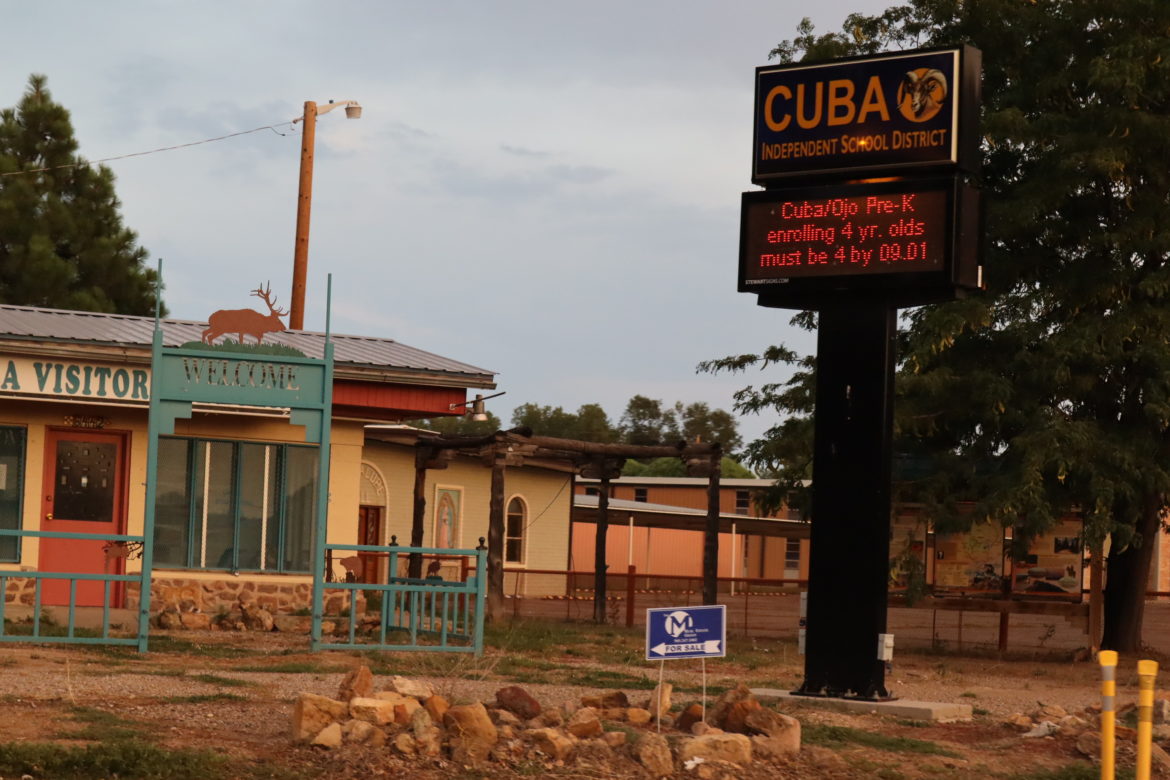 At the beginning of the pandemic, 80% of students in the Cuba Independent School District couldn’t connect online from home. Almost a year later, the problem is considerably smaller, said Tim Chavez, the district’s Technology Director. Because cell phone providers are the best way for people in the area to connect to the internet, Chavez said, the district equipped most students with a device to boost their signal for high speed internet and bought a subscription to satellite internet for the few homes out of cell phone range.

Still, there are “dead zones” that make remote learning a challenge for a few students.

Those obstacles could disappear soon.

This week the Biden administration estimated more New Mexicans live in areas without broadband infrastructure or where there’s only one such internet provider than residents in most surrounding states.

For a large slice of the public, and most students in New Mexico, the COVID-19 pandemic pushed a large chunk of life into a digital space. School instruction went online. More Americans suddenly were telecommuting.  But for many, the new online world wasn’t easily reachable, leaving them behind, at least when it came to school work. Some didn’t have internet at home, either because it was unavailable where they lived or they couldn’t afford it. Others found their internet couldn’t handle the increased bandwidth needed as entire families began using the internet from home.

To help students forced into virtual learning but without high-speed internet access at home, schools innovated. Districts purchased laptops, set up digital hotspots at community buildings at which students could use the internet from their cars, bought data plans and even gas cards to power generators for homes nearly off the grid. Some students never went online, instead downloading and uploading homework at a hotspot, or having assignments delivered by bus drivers, one of the earliest strategies in Cuba.

A study from June 2020 by the Department of Information Technology, which would become the framework for reform, laid everything out bare.

Between 13-20% of the state does not have access to broadband internet and the price tag to fill those dead zones, the report said, is an estimated $2-$5 billion.

“New Mexico lags behind its neighbor states with respect to broadband options available to residents, in part because fewer providers serve tribal and rural areas,” the report summarized, citing the state as 42nd in coverage.

Lawmakers noticed the critical need for internet at homes, introducing a raft of bills during this year’s legislative session to tackle New Mexico’s vast deficiencies.

“We’re back in the 1930s when the whole country decided we’re going to build our electricity lines,” Rep. Natalie Figueroa, D-Albuquerque, said. “The essentials; electricity, running water. We’re now saying broadband. This is an essential thing.”

One measure created a new office within the Department of Information Technology to develop and manage a state broadband plan.

“The biggest problem that we found out is there was not a broadband plan for New Mexico which the feds require you to have before you get any federal money. So if you don’t have a federal plan you’re not eligible for any of those,” Sen. George Munoz, D-Gallup, said in an interview.

The new office will serve as a planning hub to coordinate broadband expansion throughout the state.  To that end, the Legislature specified that only 10% could be spent before a plan was in place for $85 million allocated from the general fund, and another $25 million from the public education reform fund.

The office will streamline planning across the state, said Sen. Michael Padilla, D-Albuquerque, one of the main sponsors of the broadband legislation. “There are literally almost 300 easements and rights of way that you’d have to negotiate and work through in order to get something done on broadband,” he said. “This is going to save local political subdivisions a lot of money and a lot of time, they will have one place to go so they can find everything important to everything.”

Lawmakers expect heightened state planning and investment will lead to more federal money flowing to the state. But this year, mainly due to the pandemic, there are already significant levels of federal dollars for broadband support.

New Mexico leaders say about $788 million in stimulus money is flowing to the state between the CARES Act and the second federal round of stimulus passed in December, mostly for schools, tribal broadband development and internet subsidies for low-income homes.

Then there’s $20 million from the U.S. Department of Agriculture targeting 1,400 rural homes and businesses in Cibola, Eddy, Chaves, Lea, Lincoln, Otero and Sierra counties, plus a Federal Communications Commission grant totaling $165 million with a goal to provide 64,000 homes and businesses with broadband connection. The state is chipping in $6.1 million for rural development from an appropriation in 2018 and another $17 million from surcharges collected by the Public Regulation Commission.

“We’re going to get close to a billion dollars available in the first year,” Gov. Michelle Lujan Grisham said during a press conference in March. “And then we’re going to keep building towards that second billion.”

There will likely be more coming from the stimulus package signed by President Joe Biden, and Biden is currently urging Congress to pass a federal infrastructure bill that would include expansion of the internet as a key component.

What will it all add up to? Communities throughout the state that dug deep to keep students tapped into their school work will likely see more state support and more permanent solutions.

With students returning to school in Cuba, a short term goal is better school infrastructure, to ensure all students can access the internet “all day long, every day.”

In the long run, Chavez hopes there will be more support for reaching students at home. While fiber cable might be the optimal solution, with homes spread miles apart along rocky slopes, he said more focus on expanding cell phone towers to cover “dead zones”  would help out the most.

“That’s where we’re hurting right now,” he said about those dead zones. “I think the quickest and fastest way to get these kids online would be to do cell service through the cell towers.”