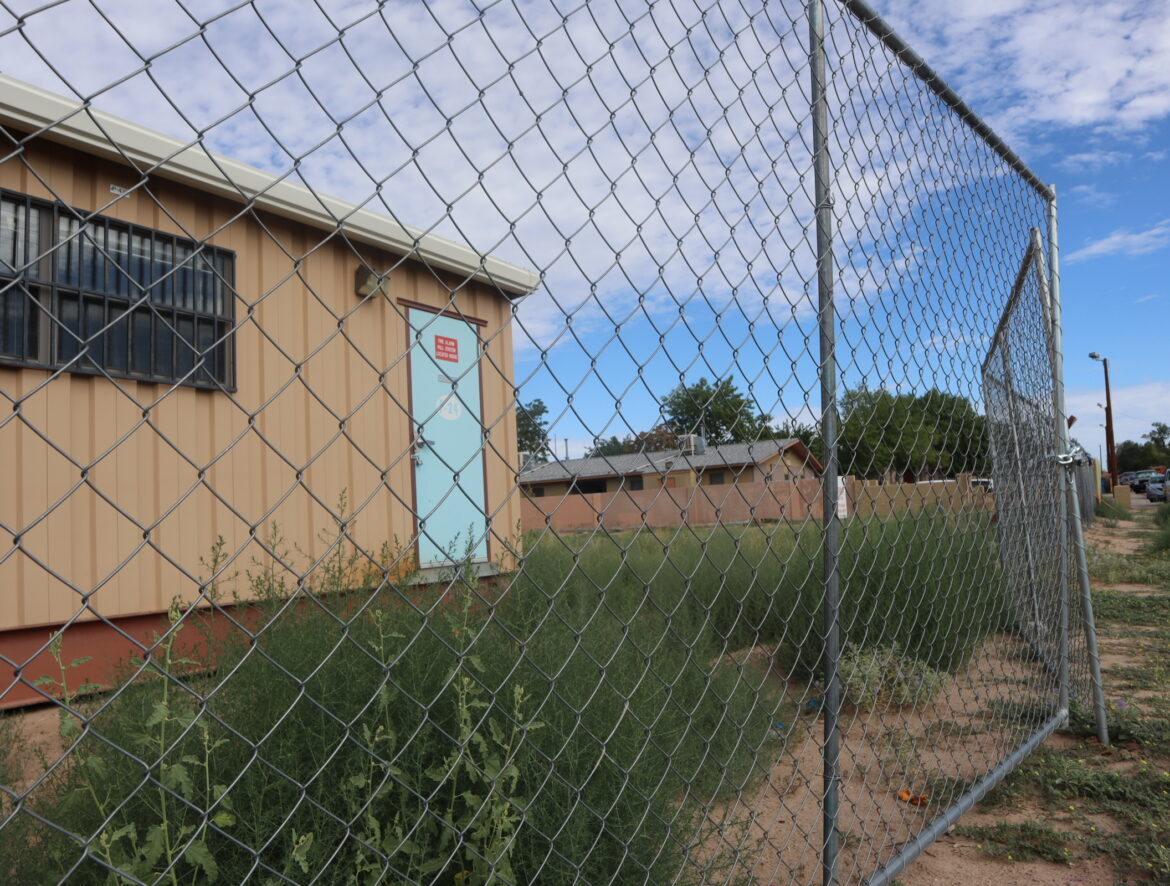 The site of brutal murders of two homeless men in 2014 is now owned by the city. Home to a portable building, it's been fenced off for years. Image: Bella Davis

A fenced-off lot near the intersection of Central Avenue and 60th Street, empty except for a portable trailer, a large “no trespassing” sign, overgrown weeds and a pile of debris, marks the site of two brutal murders.

Kee Thompson and Allison Gorman, members of the Navajo Nation experiencing homelessness, were sleeping there in July 2014 when three Albuquerque teenagers killed them.

In the days that followed, community members created memorials at the lot, the Albuquerque Journal reported, leaving stuffed animals, candles and a handwritten sign reading: “Let us pray for our homeless people. Keep them safe from evil” and City Councilors Klarissa Peña and Ken Sanchez suggested constructing a public memorial at the site. Thompson’s sister, Stephanie Plummer, hoped to see that proposal become a reality.

But eight years later, the temporary tributes community members built are long gone and despite the city purchasing the property in 2019, there is no memorial. Current plans are for a nonprofit organization to use the site as office space.

Peña made a very public push for a memorial at the site in 2016. That year, the city council allocated $100,000 to purchase the land specifically for a memorial. But that budget was later revised, and it wasn’t until 2019 that the site was finally purchased.

The city acquired the site in March 2019, according to Petra Morris, associate director of planning and policy development for the city council, with $42,000 from the city’s capital acquisition fund. The city paid for the appraisal of the property and the site plan through discretionary funds Peña can earmark as a city councilor.

After the purchase went through, Peña pinpointed the site as office space for a Native-led nonprofit organization, Native American Training Institute, that provides traditional teachings about wellness and healing to behavioral health workers, law enforcement and other professionals. It’s unclear when the site will be ready for the group to move in, but Morris said the hope is for later this year.

Peña and the nonprofit’s leadership say they hope the site will also include a memorial of some sort. Peña, who represents the district directly south of where Thompson and Gorman were killed, said that memorializing the murdered men at the location has continued to be important to her over the years.

“Looking at the memorial, that’s the biggie, right? That’s the one where absolutely we have to come together with the community to figure out what they want to see in terms of a memorial,” Peña said.

But there’s not yet been a community process to gather input on what it should look like, or whether a memorial would be open to the public. Plummer, Thompson’s sister, said no one from the city has contacted her about the purchase of the property or plans for a memorial.

Morris said there would be a community process to gather input about a memorial.

But there are challenges. Peña said she brought up the idea for a memorial at the site at neighborhood meetings she attended after the city bought the property. Some of the residents she talked with had concerns about having another park in the area, she said.

Lavaland Park is located a few blocks west of the site. The city reopened the park in summer 2020 with security features aimed at preventing people from getting in at night. Local news broadcaster KRQE reported it had been shut down for two years because of people sleeping in the park and openly using drugs.

Some residents said they were worried about having “those kinds of issues” at a new park and “attracting criminal activity,” Peña said.

That’s where the Native American Training Institute comes in.

President and CEO Patrick Trujillo said the nonprofit approached the city in 2019 looking for funding, which proved to be a successful effort. Since 2020, it’s received $24,000 each year from the Family and Community Services Department.

Councilor Sanchez, who passed away in 2020, had attended the annual, week-long school the nonprofit hosts, Trujillo said, so he was hopeful about getting support from other city leaders.

When the organization met with Peña, “she was looking at, with these two people that were killed in the area, how the city could give something back to the Native American people, and that’s how it began,” Trujillo said. “We just came in, I guess, at a good time.”

Peña said after learning about the nonprofit’s work, she thought their organization would be a good fit for the space to honor Thompson and Gorman.

The nonprofit would need to enter a rental contract with the city, which Peña and Trujillo said hasn’t happened yet. The property falls under the purview of the Family and Community Services Department, which isn’t required to put rental contracts through a bidding process, according to Morris.

Trujillo said the office would ideally be open to the public so people can walk in and get information about their work. And he said he agrees that a memorial is important, while noting that there are no definitive plans yet.

Spurred by the murders of Thompson and Gorman, the city hired Dawn Begay to serve as Native American Affairs coordinator in 2015. It’s unclear how involved she and her office are in the planning of the site.

Begay was unaware of any proposal to construct a memorial at the site, according to city spokeswoman Ava Montoya last month.

In response to an additional question about Begay’s involvement in the project, Meryl Chee, the spokeswoman for the city’s Office of Equity and Inclusion, wrote, “The Office of Native American Affairs supports Councilor Peña’s initiative for the Native American Training Institute and our office will offer guidance and support where necessary.”

Chee later declined a request for an interview with Begay and wrote the office does not “have any more information to offer.”

Plummer said she’s disappointed that the city has thus far failed to establish a memorial for her brother and Gorman, adding that any sort of tribute would be appreciated, even if it isn’t at the site of the murders. She suggested naming a shelter after the men.

She said that if a memorial is going to be at the site, it should be a public space that the community could use, like a park.

“I just don’t want my brother to be forgotten. I don’t want Allison to be forgotten,” Plummer said. “And for me, it’s not just for my brother and Allison, it’s also the ones that never get reported…I want homeless people to know that the city of Albuquerque cares about them and they’re not just what people say they are.”