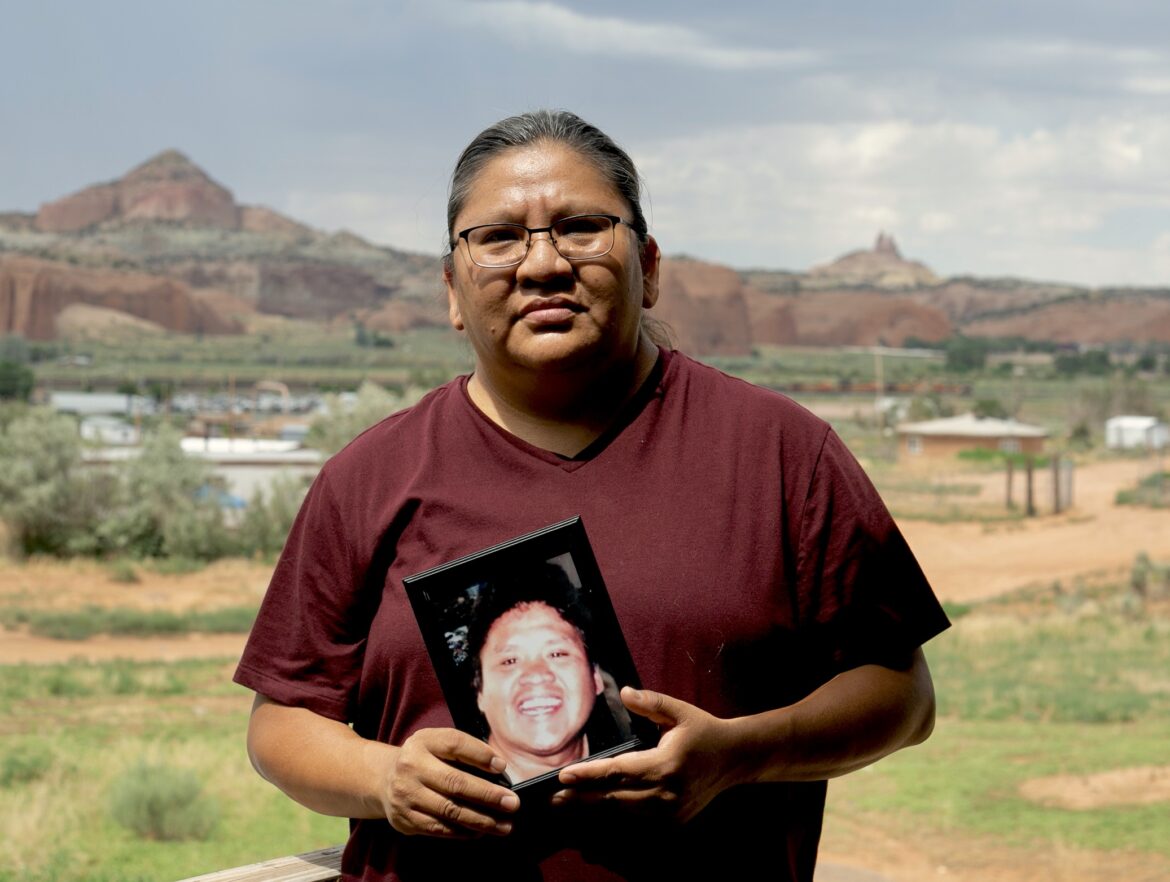 SUNDANCE, NEW MEXICO - JULY 14, 2022: Stephanie Plummer, Diné, at her home just east of Gallup, NM. She holds a photograph of her brother Kee Thompson, who was brutally murdered in 2014 by three teenagers while sleeping in a vacant Albuquerque lot. CREDIT: Marjorie Childress for New Mexico In Depth.

Stephanie Plummer remembers her brother Kee Thompson as an exceedingly kind person, quiet at first but talkative and outgoing once he got to know people.

“If there was someone who was struggling and needed the shirt off his back, he would give it to them,” Plummer said during an interview with New Mexico In Depth.

Thompson and a friend, Allison Gorman, both members of the Navajo Nation, were murdered eight years ago today by three Albuquerque teens who beat them with cinder blocks while they slept in a vacant lot on the city’s west side. Another man, Jerome Eskeets, barely managed to escape.

Current Mayor Tim Keller early in his tenure proposed building a city-run hub for emergency shelter and services to help people access housing. The Gateway Center is expected to open in phases starting this winter, with 50 beds for single women, said Cristina Parajón, Gateway administrator for the Family and Community Services Department.

But eight years after the murders of Thompson and Gorman, Native people continue to make up an outsized portion of Albuquerque’s unhoused population, which has steadily risen over the past decade. And statewide, unhoused Native people appear to be dying more frequently and at younger ages than any other group.

Violence hasn’t let up, either. In December 2017, Audra Willis, a 39-year-old woman from ​​To’hajiilee who reportedly stayed with friends or family or slept on the streets when in the city, was found stabbed to death and decapitated in southeast Albuquerque. A little over a year later, the body of Ronnie Ross, a 50-year-old man from Shiprock, was found. He’d been shot 12 times. Timothy Chavez, who was 15 at the time, pled guilty to first-degree murder in 2021.

Native people make up 4.5% of Albuquerque’s overall population but they account for 23.4% of the unsheltered homeless population and 14.7% of the homeless population living in emergency shelters, according to the annual “point-in-time count” conducted by the New Mexico Coalition to End Homelessness.

The count relies on volunteers who fan out on one night in January to find and count people experiencing homelessness. The results are limited to who the volunteers can find and what those people are willing to share, so the numbers are inaccurate, said Hank Hughes, executive director of the coalition, but it provides at least some idea of the scope of the crisis.

“I think it’s just safe to say there’s a disproportionate number of Native Americans who are homeless and that’s always been true, the last several years that we’ve even tracked that,” said Hughes, noting that Black people also disproportionately experience homelessness in the city.

Albuquerque Health Care for the Homeless reports similar findings, based in part on data collected through intake forms. Anita Córdova said for the 16 years she’s been with the organization the trend has remained.

Using statewide data from the Office of the Medical Investigator, the health care organization has for the past three years been conducting an ongoing mortality review. The data shows that from 2014 to 2018, Native people made up 22% of deaths of unhoused people, proportionally the highest rate among any racial group. In 2020, it increased to 26%.

The study, Córdova said, has found the average age of death for unhoused Anglos is 45.6 years old. For unhoused Native people, it’s 37.5. For Native women, it’s 35.3.

“[This data] demonstrates that whatever is being done or not being done continues to leave homeless Native Americans vulnerable to the worst outcome, which is premature mortality,” Córdova said.

Hughes—who pointed to systemic racism and poverty as major factors behind the high  rates—and Córdova both emphasized the urgent need for affordable housing.

“Unless we are leading with housing first, these challenges, illnesses, exposure to violent victimization, all of those things, as long as people are forced to live in an unsheltered situation, or even a sheltered situation such as a shelter or motel, the vulnerability stays,” Córdova said. “So what we really need is housing that’s affordable, culturally competent and accessible and that is housing first, meaning people have their own house and dictate how they live in that house.”

Had such housing been available to her brother, Plummer said she thinks it would’ve made a difference.

Thompson  — who was in his 40s when he was murdered — was adopted as a teenager by his aunt, who is Plummer’s mom. Growing up in Sundance, a small Navajo community near Gallup, Thompson would watch after Plummer, who was about six years younger, when their mom was at work. He was a caring and attentive brother, Plummer said, despite a traumatic childhood marked by the death of his biological mother and abuse from his father.

When a nephew with whom he was close died in the mid 2000s, he left for Albuquerque. Plummer and other family members made frequent trips to check in on Thompson and give him food and other essential items, but he preferred staying in Albuquerque. The trauma of losing his nephew and alcoholism combined with the close connections he’d formed with other unhoused people, who he considered to be his second family, kept him in the city, she said.

She recalled a memorial service for Thompson during which a friend of his left his monthly bus pass under a photo of Thompson.

“He was standing there like he was praying and then he started crying and he put his bus pass there and a flower on top of it,” Plummer said. “Later on, I asked him, I said, ‘My name is Stephanie, I’m Kee’s little sister. I just got a question for you. Why did you put your bus pass there?’ And he said, ‘So he’ll be able to catch a ride to heaven.’”

Plummer said she feels that in the time since her brother’s death the crisis of homelessness for  Native people hasn’t significantly improved, and she worries about poor treatment that people living without housing face in Albuquerque.

During one of the family’s visits prior to Thompson’s death, he told his sister that he’d done yard work for a local man. When he finished, the man called the police instead of paying him and denied having hired him. The responding officer told Thompson he’d be charged with trespassing if he returned.

On many other occasions, he talked about having trouble finding places to sleep and having personal belongings stolen when he stayed at shelters, Plummer said.

The task force created by Berry has informed much of the city’s efforts since Keller became mayor, said city officials.

One of the task force’s recommendations was expanding access to emergency shelters. The long-awaited Gateway Center, envisioned by the city as a “health hub”, is set to open in phases starting at the end of this year. The center, which received $10.6 million of the city’s $1.4 billion budget this fiscal year, will ultimately have space for 100 single adults and 25 families.

The center’s design was informed in part by input from unhoused people, with a focus on the Native population, who, according to point-in-time data, access shelters at a lower rate than any other demographic. (People experiencing unsheltered homelessness interviewed during this year’s point-in-time count listed concerns related to staff, fear of getting COVID-19, and overcrowding as some of the reasons they don’t use shelters.)

“When we saw this data, we said, ‘Well, we need to fill this gap in service,’” said Parajón. “Shelters are often places where people can get connected to housing and resources, to treatment, and the Native American population is not accessing those resources.”

The workshop findings were published earlier this year. Suggestions included a communal grill, a sweat lodge outside and the option for people staying at the shelter to rearrange furniture to their liking.

Another recommendation from the task force was to appoint a tribal liaison, which the city did in 2015 with the hiring of Dawn Begay, Native American affairs coordinator in the Office of Equity and Inclusion. In 2019, Begay’s position became full-time, and the city has also added an intergovernmental tribal liaison.

“We focus on working with our Native constituents here in Albuquerque as well as working on tribal engagement with the surrounding tribes on several issues,” Begay said.

As part of that work, the city signed a memorandum of understanding with the Navajo Nation Human Rights Commission in August 2019 to address racial equity and discrimination and foster increased communication.

Lauren Bernally, a policy analyst for the commission, said the COVID-19 pandemic has significantly interfered with those efforts, but the commission is now getting back to full-time work.

Right before the pandemic began, Keller agreed to host a summit in Albuquerque with other border town mayors, Bernally said. The plan was to address issues including homelessness among Navajo people and the commission’s “concern with excessive force and unlawful arrests of our homeless individuals.”

The city is “open to revisiting” the idea of a mayoral summit, Begay said.

Asked if she thinks the outlook for Native American homelessness has improved in the eight years since the murders of Thompson and Gorman, Bernally said: “I feel that, yes, there’s some type of improvement because at least we have a dialogue and a direct line to the mayor’s office. In the past, that was completely cut off.”