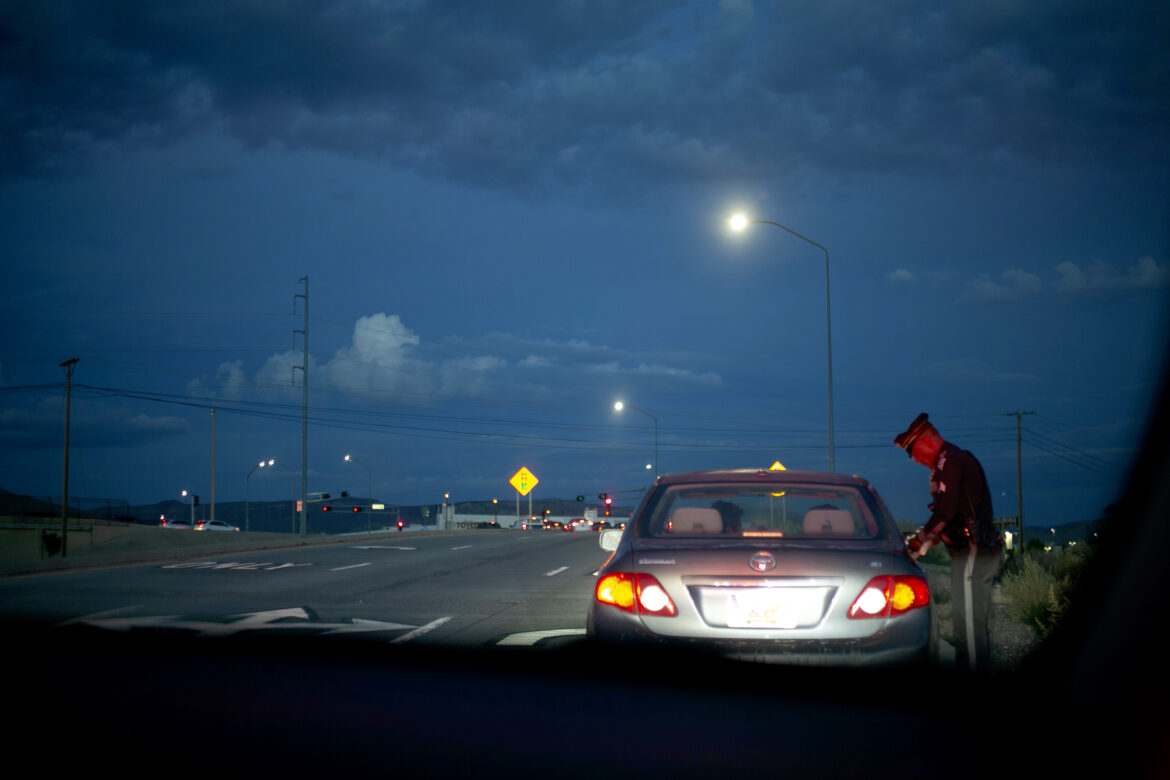 ALBUQUERQUE, NEW MEXICO: State Police Sgt. Toby LaFave speaks to a driver he pulled over on Interstate 40, under suspicion for driving while intoxicated. CREDIT: Marjorie Childress for New Mexico In Depth

One lawmaker called on the governor to convene a task force to tackle the incredible harm alcohol visits on New Mexicans. Another exhorted colleagues to not become numb to harrowing statistics on the social ills emanating from alcohol abuse. Department of health officials reiterated over and over that tackling the issue requires a comprehensive, statewide effort.

These comments have come during discussions and legislative hearings over the past two weeks in response to New Mexico In Depth’s Blind Drunk, a series that called attention to the state’s alcohol-related public health crisis. New Mexicans die of alcohol-related causes at far higher rates than in other states. It’s more intertwined with violence than most people realize. And it contributes to high-rates of adverse childhood experiences and chronic illness, problems that touch communities across the state.

The series, reported by Ted Alcorn, has been a wake-up call to state lawmakers. All one has to do to confirm this observation is the all-day hearing lawmakers on the Courts, Corrections, and Justice committee held Wednesday at the Roundhouse in Santa Fe.

Lawmakers invited the state health department’s epidemiology team to discuss the relationship between alcohol and violence, the subject of A Missing Ingredient, the series’ third story.

In the afternoon portion of Wednesday’s hearing, State Police Lt. Kurtis Ward, prominently featured in Eyes on the Road, the series’ second story, spoke to lawmakers about the state’s DWI problem.

“We’re not well,” said Sen. Joe Cervantes, D-Las Cruces, a co-chair of the committee. The headlines always are New Mexico is the worst in a number of things and alcohol deaths is one of them, he continued. “But we’re not just worse, we’re off the charts. And we’re in this terrible crisis.”

Cervantes drew on personal experience to reinforce the gravity of the state’s situation, telling his colleagues about several people he’s lost to drunk drivers.

Among the findings that disturbed Cervantes and some of his colleagues the most is New Mexico’s rate of alcohol-related deaths, which leads the country.

“I’m pleased that in the last few weeks and months we’ve seen some reporting, some special stories on the issue,” Cervantes said. ”But I’m challenging us to keep this issue at the front because this is mind-numbing to me that we would be double other states.”

“This is a huge public health problem,” she said, “but it’s [also] a community safety problem. …we are somewhat deluded, I think right now, into thinking that all of our problems are related to drugs, and that it’s all meth and fentanyl. But alcohol’s not coming across the border. And it seems to be more devastating right now.”

Wednesday’s hearing is only the latest evidence of a newly engaged Legislature on alcohol and its harms. Two other legislative committees in the past month have taken up the issue to varying degrees, after our series was published or discussed in news outlets across the state, including the Santa Fe New Mexican, the Las Cruces Sun-News, the Gallup Independent, Albuquerque’s NPR and PBS affiliates, KUNM and NMPBS, and Koahnic Broadcasting’s Native American Calling radio program.

On NMPBS’s public affairs program, New Mexico In Focus, House Rep. Joanne Ferrary, D-Las Cruces, made the case for a task force on alcohol during a conversation with Alcorn and others.

New Mexico In Focus host Gene Grant asked Ferrary about a recent case where a drunk driver plowed through a crowded parade in Gallup on August 4.

“I hope it brings the attention that we need to motivate what we should start, like the governor immediately setting up a task force with legislators and all the experts,” she said.

Creating a task force was number one on the series’ list of key recommendations culled from public health experts across the nation. A task force is a way “to keep the recommendations coming and the evaluation moving forward,” said Michael Landen, New Mexico’s state epidemiologist from 2012 to 2020.

What is clear is it won’t be easy tackling such a large-scale problem.

Qualifying her remarks that Blind Drunk had alarmed legislators and policy makers, Showers offered this sobering reminder on Wednesday: “It’s important to be mindful that this is truly a generational problem that we’ve had really high rates for probably at least 30 years in the state of New Mexico.”

And that sort of challenge will take coordination, and working together — an idea Dr. Laura Parajon, deputy secretary of the state health department, reinforced during Wednesday’s hearing, using terms like “multi state agency” and “multi sector” approach. Chasey picked up on that idea, saying a next step might be forming a working group to include members of several legislative committees and public health experts from the health department.

Even with renewed focus on alcohol’s harms, overcoming political resistance likely won’t be easy in New Mexico. Two former state epidemiologists, Landen and Mack Sewell, who served in four administrations as state epidemiologist from 1989 to 2012, told Alcorn that governors of both political parties viewed preventive measures as “a nonstarter.”

When he published scientific research about alcohol, he was pressured to soften his language, Landen said. “You would have to mince words about what were effective interventions.”

Sewell said he recommended measures to reduce alcohol access on multiple occasions and each time they were squelched. “I don’t know how to say it in a delicate way: It was not popular.”

But Rep. Moe Maestas, D-Albuquerque, sounded a note of optimism. The Legislature can take action. Legislators demonstrated that when they approved changing state alcohol laws in 2021, whether people liked it, didn’t like it or were indifferent, he said. That bill was the Legislature’s first attempt to shape alcohol policy in decades, he said, saying they had to blow the dust of the Liquor Control Act. Maestas said lawmakers had “finally found the political will” to make smarter decisions about alcohol.

The number one remedy national experts mentioned to New Mexico In Depth for curbing alcohol harms is to make alcohol more expensive. Landen, who resigned as New Mexico’s state epidemiologist in 2020, said an increase in alcohol taxes ought to be the “centerpiece” of strategies to reduce alcohol deaths, either raising them statewide or empowering local counties to impose their own taxes.

There will be myriad proposals to consider, including whether to change how New Mexico taxes alcohol, Maestas said.

Where is Gov. Michelle Lujan Grisham on all this? We asked her this week via email about Ferrary’s task force request, possible changes to how New Mexico taxes alcohol and other questions. On Thursday morning, her office announced Lujan Grisham had tested positive for COVID. We wish her a speedy and full recovery. In the meantime, we’ll wait to hear how she answers our questions.