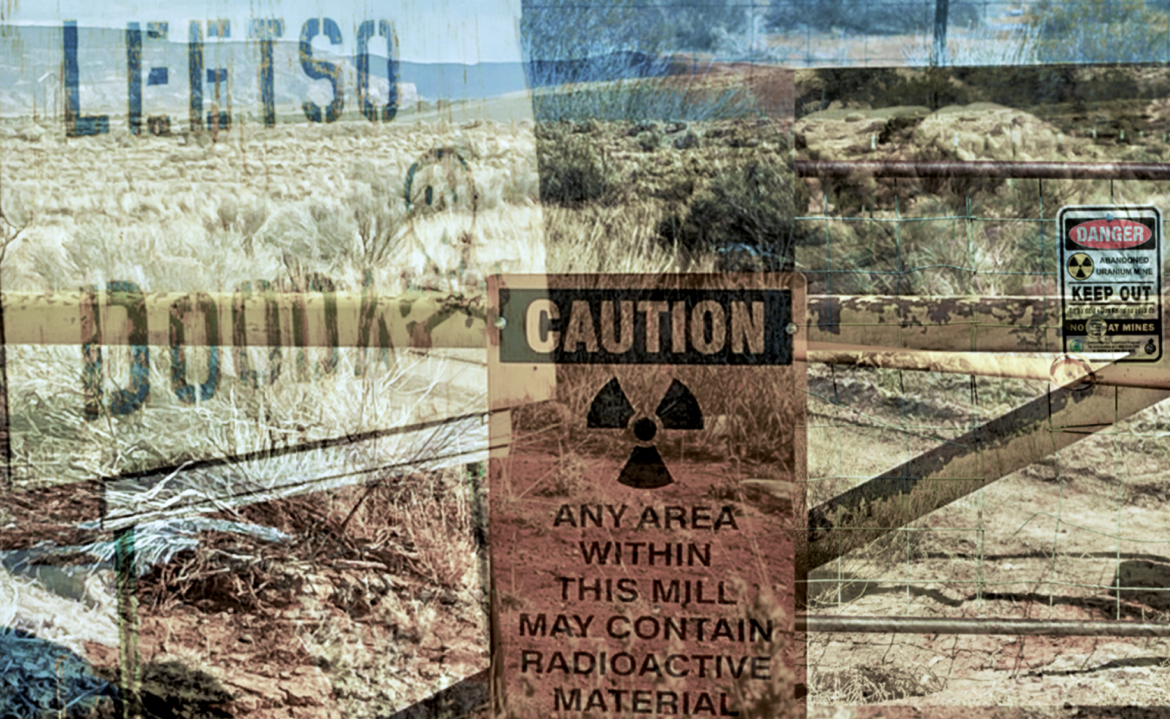 "Leetso Dooda", which means "no uranium" in the Diné language, is a rallying cry in Navajo communities where abandoned uranium mines and mills dot the landscape. (Images provided by Bryant Furlow of a mill site in the Ambrosia lake mining district and Kalen Goodluck of signs near Church Rock, New Mexico)

ProPublica, a national news organization, published A Uranium Ghost Town in the Making yesterday, about an important topic many Americans, including New Mexicans, still know little about: the legacy of uranium in our state and the greater Southwest.

The story focuses on the residents of the small northwest New Mexico communities of Murray Acres and Broadview Acres, near Grants, who continue to suffer the potential effects of a uranium mill operated by Homestake Mining of California. Those include decades of sickness, including thyroid disease and lung and breast cancer.

Homestake processed ore from a nearby mine beginning in the 1950s in an area known as the Grants Mineral Belt, a rich deposit of uranium ore that runs through the northwest corner of New Mexico. Nearly half of the uranium supply used by the United States for nuclear weapons in the Cold War came from the region.

Homestake’s current owner wants to transfer the site over to the U.S. Department of Energy for monitoring and maintenance. But before that can happen the company must build a case that proves “contamination, which exceeds federal safety levels, won’t pose a risk to nearby residents or taint the drinking water of communities downstream.”

Rather than finish cleaning up the area, the company’s attempting to buy out nearby residents and demolish their homes instead.

“Property records reveal the company had, by the end of 2021, purchased 574 parcels covering 14,425 acres around the mill site. This April, Homestake staff indicated they had 123 properties left to buy. One resident said the area was quickly becoming a “ghost town,” ProPublica reported.

ProPublica’s story is astonishing but not surprising. The legacy of uranium in New Mexico, particularly in the Grants Mineral Belt, is a subject New Mexico In Depth has reported on over the years. The more one learns about the legacy of uranium in the state, the more shocked one becomes at the decades of indifference shown to the health and lives of people who’ve lived near uranium mines and mills and who continue to drink tainted water.

The indifference from uranium companies and the federal government, as well as the continuing toxic legacy of uranium, deserves to be more widely known, especially the disproportionate effects on Indigenous populations and the communities that live in the region.

If you’re interested in reading more about that legacy, here are a few stories New Mexico In Depth has published over the years: