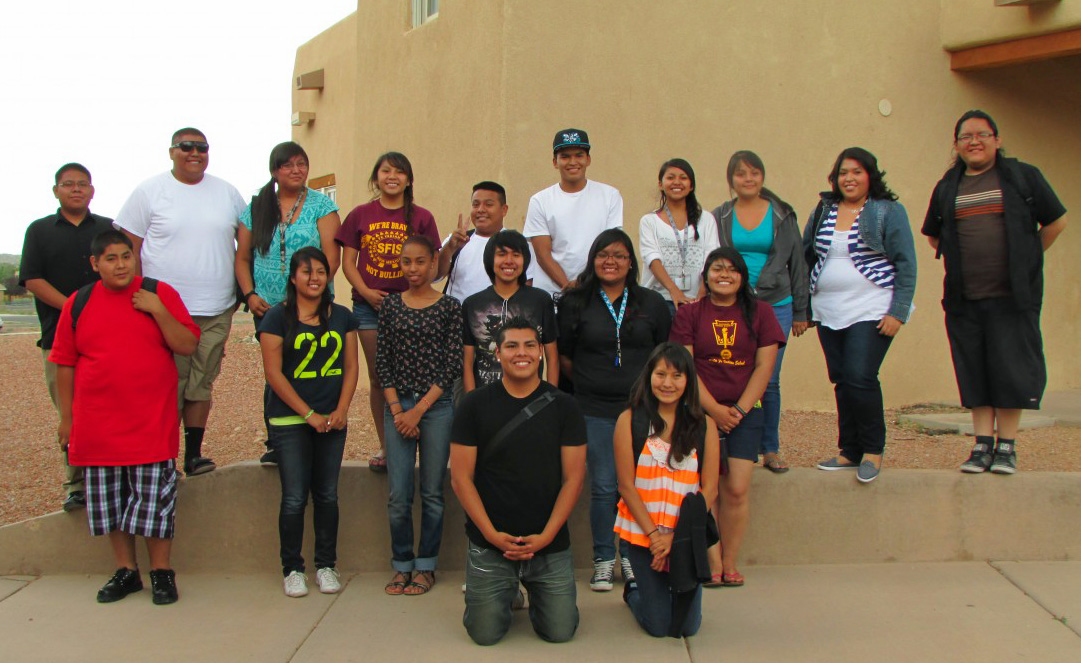 While the heat swooned and clouds built over the Sangre de Cristos, I waited with two other reporters outside a locked door at the Santa Fe Indian School. The three of us chit chatted. And wondered how we might reach the meeting we were scheduled to attend.

After a few minutes, a student approached from the east, entered the building and crossed the foyer in front of us. We chuckled and walked around to the unlocked door he’d entered around the corner. The door was only a few feet from where we’d been standing, but we’d missed it from our vantage point.

It was a provident way to start the afternoon.

More than a decade old, the program nurtures and challenges teens from the state’s Native communities. Over the course of the multi-year institute, students are encouraged to remain committed to their community’s values while also learning about how to best navigate western educational and policy systems.

The co-founder and co-director of the institute, Regis Pecos (from the Pueblo of Cochiti), had invited New Mexico In Depth (NMID) to talk about journalism and how students might share their stories while still maintaining their community’s values. For our part, the NMID team wanted to know what students think about journalists and media coverage of Native communities in New Mexico.

Let me just say what we already know: Mainstream media coverage of American Indian issues is shockingly inadequate. Despite the fact that 10 percent of the state’s population is Native, these communities are basically ignored by the media. What coverage does make its way to newspapers and televisions is focused on alarming statistics and violence, or else casinos, sports and commercial events like Santa Fe’s Indian Market.

By ignoring such a significant segment of the population, journalists fail to serve the public. And by focusing time and again on negative news stories, we’ve also contributed to the marginalization of Native youth.

They wondered why journalists don’t write about their peers — the teens they know who are succeeding in school, performing service projects in their communities, and working to preserve their cultures, traditions and languages.

“They don’t see us,” one young woman said.

When asked to describe themselves, the teens said they are respectful, passionate about their way of life and culture, compassionate, and unique. Students also explained that they want “unity among all people” and asked that people who are trying to understand Native communities be open-minded. One group of students pointed out that it’s important to cover negative issues, but they wish journalists might do it a bit differently.

Among their suggestions: “Include something positive in the story,” and, “give a lighter end, saying something like ‘there’s room for improvement…’”

As students pointed out, they don’t need to be “saved.” Rather, they just need to be noticed.

Many factors discourage non-Native journalists from covering Native communities. We are often ignorant of history, policy and culture. Navigating the official protocol for information and quotes can take a very long time, and it’s sometimes impossible on deadline to travel to rural communities.

But the onus is on us to better understand New Mexico’s complex history, reach out to people we might not know, and build trust among new sources.

Tricky stuff for journalists to hear

Students asked that journalists know their boundaries as questioners and show respect for the fact that in Puebloan communities there is no separation of church and state. Religion permeates all aspects of life, and it’s rarely acceptable for people to discuss the sacred with outsiders. It’s also not appropriate, they explained, for young people to act as spokespeople on issues. That privilege lies with governors, tribal councilors, and others chosen to lead. When people share information out of turn, they might face consequences.

This is tricky stuff for journalists to hear. Our work is founded on giving voice to the voiceless and upholding First Amendment rights. But clearly, the current model of covering Native communities — and in particular, young people — is not working.

“We don’t want anyone to see us too much as bad people,” one young man said toward the end of the afternoon. “We all want that to end, and we all want the same thing…. to be noticed as good people.”

Although newsroom diversity is still a major problem, Native journalists are working hard to change that. Most communities have their own newspapers. And nationwide, outlets such as the Koahnic Broadcast Corporation, a NMID partner, and Indian Country Today are leading the way in covering Native news.

New Mexico’s Native youth leaders are doing their part. Now it’s up to journalists. By consistently focusing on the negative, we’re perpetuating stereotypes. And we’re also missing the story.