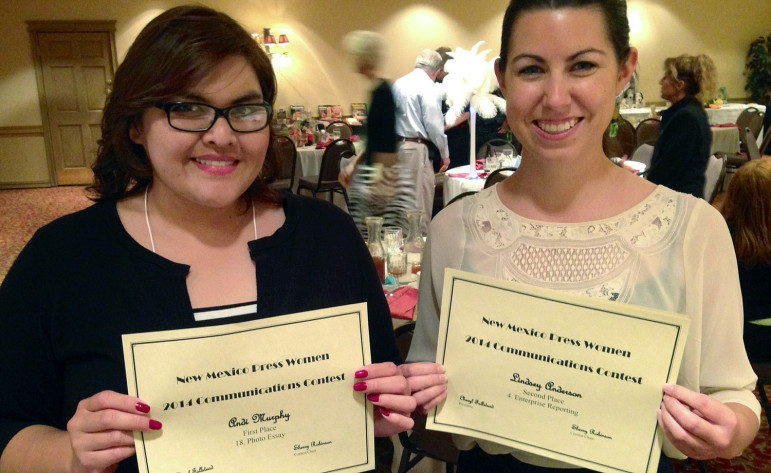 Las Cruces Sun-News reporters Andi Murphy, left, and Lindsey Anderson, who have won state and regional awards for work they did with New Mexico In Depth.

For its first year of publishing articles, New Mexico In Depth won 16 state and regional awards for our journalism.

Since then, our journalism has continued to receive awards, for both our own reporting and our work in collaboration with partner news organizations.

Take a look at our award-winning journalism:

New Mexico In Depth won three 1st place and one 2nd place finish in the Society of Professional Journalists’ (SPJ) annual Top of the Rockies’ contest. First place awards were in the Public Service, the Politics: Enterprise Reporting, and the General Website Excellence category. Our second place award was in the Investigative/Enterprise Reporting category. Read more here.

What the judges said: “Excellent example of persistent digging and fine storytelling.”

What the judges said: “Good analysis of giving that put a human face on those who put money toward politics. It’s unfortunate more weren’t willing to comment on the record. Additionally, the thoughtful highlighting of the complexity of the situation via a needed correction was excellent.”

The Medicaid Freeze: In June 2013, Gov. Susana Martinez’s administration decided to freeze Medicaid funding to 15 health organizations after an audit found problems including overbilling and potential fraud and asked the attorney general to investigate. New Mexico In Depth coordinated coverage with other organizations including the Las Cruces Sun-News, and NMID and the Sun-News sued to try to win release of the audit. For our efforts, a team of journalists working for NMID and the Sun-News won a 1st-place award in the Society of Professional Journalists’ Top of the Rockies 2013 competition for health enterprise reporting and a 1st-place award in the New Mexico Press Women’s 2013 competition for continuing coverage.

Examining Martinez’s tenure: Gov. Susana Martinez  loomed large in the Roundhouse during her first two years as governor. New Mexico In Depth, in partnership with the Santa Fe New Mexican and Las Cruces Sun-News, examined what she had done and what was in store for the rest of her term. Our six-part series, which was reported by a team of journalists working for all three news outlets, won a 1st-place award for politics enterprise reporting in the SPJ Top of the Rockies competition and a 1st-place award for a special series in the New Mexico Press Women competition.

Deportation and children: This two-part radio series examined the toll deportation can take on the children who are left behind. It was produced by New Mexico In Depth in collaboration with multimedia partner Fronteras: The Changing America Desk. For her work on this series, reporter Sarah Gustavus won a first-place award for radio feature reporting in the SPJ Top of the Rockies competition.

DC stalemate leaves too few visas for crime victims: Despite their value to local prosecutors, from 2010-2012 there were too few U visas — those given to immigrants without legal status who help prosecute crimes — around the nation to meet demand because of a federally mandated cap of 10,000 per year. Las Cruces Sun-News reporter Lindsey Anderson, working with NMID, won three awards for this package of stories — first place in investigative/enterprise reporting in the SPJ Top of the Rockies competition, second place in enterprise reporting in the New Mexico Press Women competition, and a monthly “DFMie,” a regional award from the Sun-News’ parent company, Digital First Media.

Are New Mexico’s tribes being flooded — then left high and dry?: When heavy, prolonged rains sent floodwaters rushing down streambeds and arroyos and into towns and homes in September 2013, many of New Mexico’s rural, American Indian communities found themselves inundated with mud and water. But as some communities found, an infusion of federal cash into the state designed to help after a disaster didn’t mean immediate changes on the ground. NMID reporter Laura Paskus won first place in the public-service category of the SPJ Top of the Rockies competition and third place for investigative reporting in the New Mexico Press Women competition for this article.

Immigrants’ stories are key to reform effort: Immigrants like Alejandra Gomez and Cynthia Alba helped lead a lobbying effort in 2013 that many hoped would give comprehensive reform a greater chance than the last time Congress considered it in 2007. NMID Deputy director Heath Haussamen won a first-place award in the news feature category for this story in the SPJ Top of the Rockies competition.

A trip home to butcher a sheep: Las Cruces Sun-News reporter Andi Murphy had never really explored the food that comes from the Navajo reservation, where she’s from. On a trip home in 2013 she got to experience a sheep butchering for the first time. Her resulting photo essay for NMID won first place in the New Mexico Press Women photo essay category.

An open letter to Gov. Martinez: NMID executive director Trip Jennings’ 2013 column challenged Gov. Susana Martinez to answer questions about her administration’s freezing of Medicaid funds to 15 behavioral health agencies and be more transparent. The piece won a first-place award for a news column in SPJ’s Top of the Rockies competition and second place for an editorial in an online publication in the New Mexico Press Women competition.

Tax bill shows need for legislative reform: State legislators shirked their duty to be deliberative and transparent when they passed a complex tax-reform bill in 2013,  NMID deputy director Heath Haussamen argued. If the problem, as some believe, is that New Mexico’s legislative process is designed to avoid debate and scrutiny, then the process needs reform, he argued. His column won first place for an editorial in an online publication in the New Mexico Press Women competition and a second-place award for a news column in SPJ’s Top of the Rockies competition. 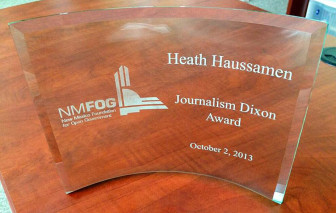