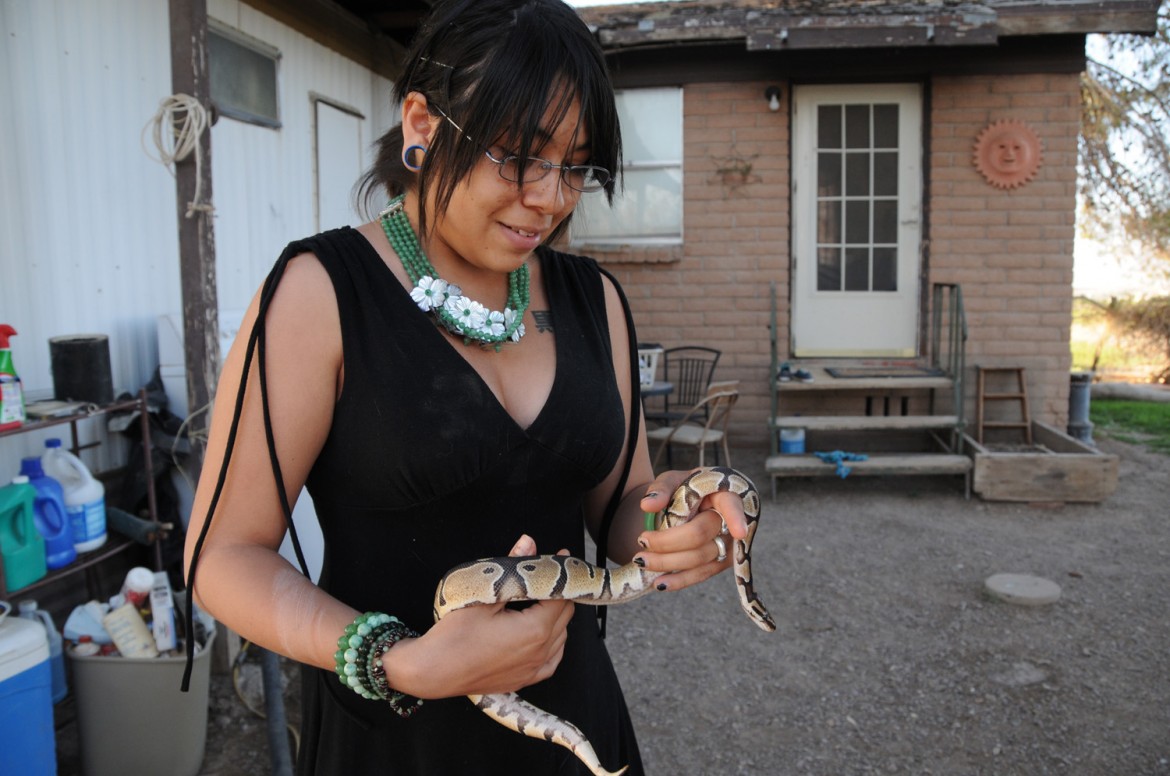 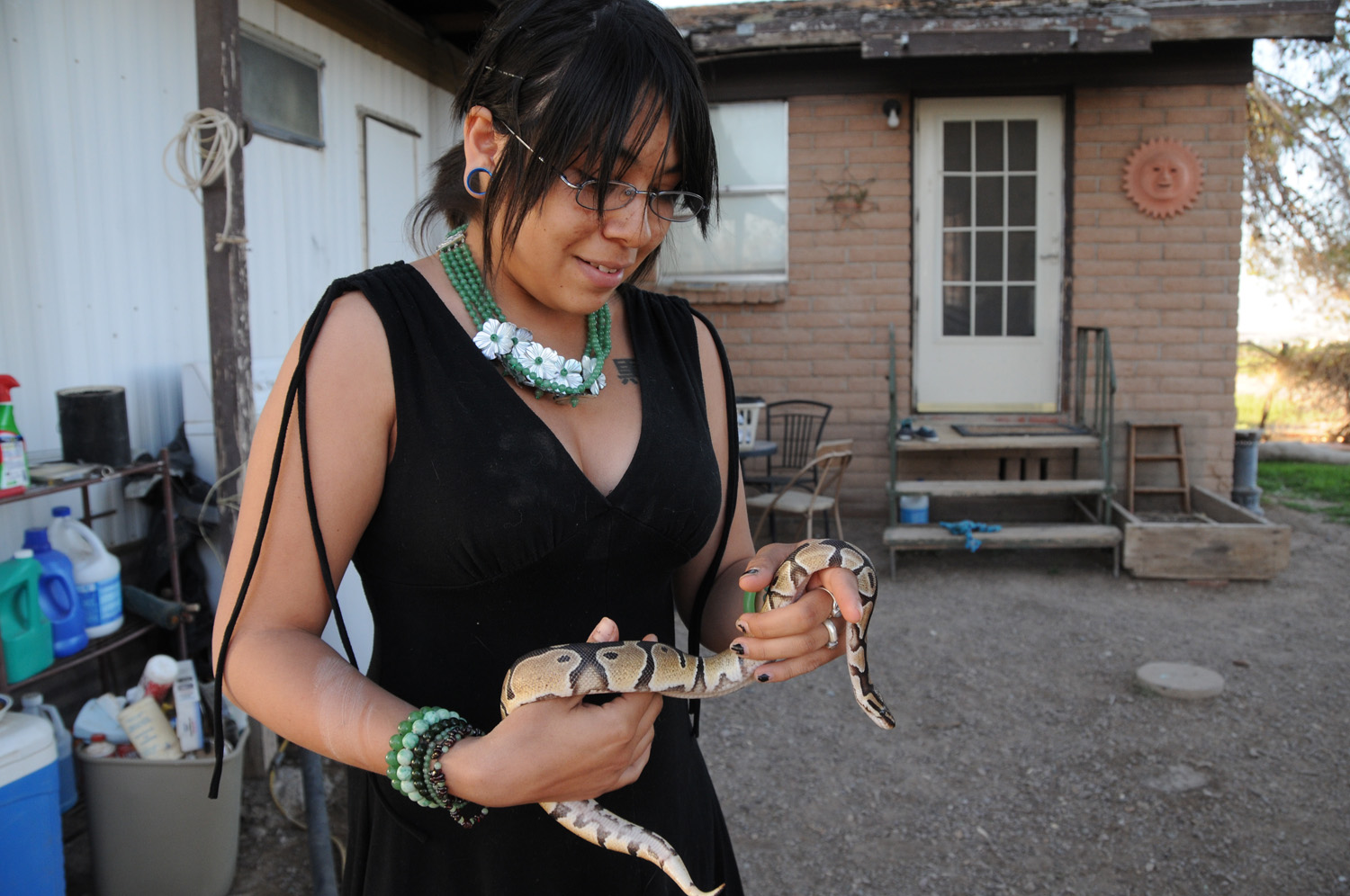 Andrea Muñoz, 15 and a U.S. citizen, standing on the steps outside her home in La Mesa with her family's dog Lassie. Andrea doesn't let me photograph her face.

Soledad Pizaña, 40, who is living in the United States without legal status, has cleaned homes like this one in Las Cruces for years to make ends meet.

I remember the first time I saw a spark in Cynthia Alba’s eyes.

I was interviewing Cynthia, her mother and her sister at their home in La Mesa on April 9. I asked who owned the books sitting on two large shelves in a corner. Cynthia jumped up and pulled book after book off the shelf, including Harry Potter and Like Water for Chocolate.

The often-gloomy teen’s eyes widened, her mouth curled into a smile, and her speech quickened as she described the plots and themes and told me what she learned from each book.

When I pointed out that this was the first time I’d seen her excited about anything, Cynthia replied, simply, “Books made me.” A graduate of Gadsden High School in rural and impoverished southern Doña Ana County, she said she learned more from books than in the classroom.

Cynthia described reading and rereading novels until she memorized them. She pulled a book from the shelf called Bright Shadow, which she read in fifth grade. The story opened with a riddle, and it bothered her that she couldn’t recall its answer.

Rather than giving up, she talked through the book’s plot until she remembered.

Cynthia’s critical-thinking skills and determination surprised me. So did the fact that she was so well-read.

More than 15 years ago, Cynthia’s mother, Soledad Pizaña, walked with her across a bridge between Ciudad Juárez and El Paso. Soledad, 40, has been living in the United States without legal status ever since and cleans homes for a living. Cynthia, 19, also lacked legal status until last year, when the federal government granted her a deferred action permit that lets her work legally.

Cynthia’s sister, 15-year-old Andrea Muñoz, was born here and is a U.S. citizen.

I supposed it’s because they’re an immigrant family, because they live at least partly in the shadows, because their two sedans are old and beaten up, because the house they’ve lived in for years is a modified mobile home, that this white, middle-class journalist carried into my interactions with them an assumption that my background and socioeconomic status in some way made me more capable than them.

It’s an assumption I wasn’t even aware of until Cynthia struck it down.

Passionate about telling their stories

When I asked Sarah Nolan, a community organizer, to connect me with an immigrant family in February, I didn’t anticipate how dramatically my interactions with this family would challenge me.

I found myself in journalistically ethical quandaries I had never faced or, in some instances, even considered. One day I discovered that these women had gone an entire winter without a working heater. I could give up one meal at a restaurant to buy them a space heater. But could I? Should I?

I found myself rereading a textbook from my college days. In Doing Documentary Work, Robert Coles wrote that such work “is a journey, and is a little more, too, a passage across boundaries (disciplines, occupational constraints, definitions, conventions all too influentially closed for traffic), a passage that can become a quest, even a pilgrimage, a movement toward the sacred truth enshrined not only on tablets of stone, but in the living hearts of those others whom we can hear, see, and get to understand.”

“Thereby,” Coles concluded, “we hope to be confirmed in our own humanity – the creature on this earth whose very nature it is to make just that kind of connection with others during the brief stay we are permitted here.”

Reading Robert Coles’ book Doing Documentary Work was a relief; it gave me space to embrace my humanity – not to abandon my journalistic mission to be fair in my reporting, but to let me feel emotion.

As a journalist I’ve believed I was supposed to remain detached from those whose lives I’m covering. I’ve struggled with that at times, including a decade ago when I reported on several child abuse deaths for the Las Cruces Sun-News. Reading Coles’ work was a relief; it gave me space to embrace my humanity – not to abandon my journalistic mission to be fair in my reporting, but to let me feel emotion.

On a recent Friday evening, as I listened to Soledad, Cynthia and Andrea talking with Monica Ortiz Uribe, a radio reporter for NPR’s Fronteras Desk, I was struck by how comfortable it felt to hang out with them at a pizza joint. I’m a journalist documenting their lives – I’ve never been around them without my camera and computer – but that doesn’t mean I’m unaffected by my interactions with these women. I find myself caring about their well-being, getting excited when something important happens and sad when they face tragedy.

To pretend otherwise would be dishonest.

I’m not talking about bias, about advocating for immigration reform. We at New Mexico In Depth have challenged ourselves to do reporting that gets on the ground in communities. I’ve developed a deep belief that these women’s stories are just as important as those of the policymakers whose decisions affect their lives.

There are some important stories to tell. While Soledad, Cynthia and Andrea talked with Monica on that recent Friday night about their dreams and the difficulties they face, I thought about how much their lives have changed in the few months I’ve known them.

Cynthia has a new job and has moved out of her mom’s house. She’s living on her own for the first time. While energized by her newfound freedom, she wept as she shared her fear that immigration reform will fail again, her deferred action work permit will be revoked in a year, and she’ll be forced back into the shadows.

Soledad and Andrea are also looking for a new place to live. An elderly man let the three of them stay rent-free in the modified mobile home on his property for years. He recently died, and they have to leave. Through tears, Soledad shared, in Spanish with Cynthia translating, that she is more upset by the death of someone she considers family than worried about where they’re going to live.

Today officially launches a journalistic project documenting the lives of the women in this immigrant family. We’re not exactly sure what the series will look like, but we have ideas.

In the coming months, I’ll write news articles about interesting aspects of their stories and how policies affect them. Other times, my reporting will be more personal; sometimes I’ll journal about my time with Soledad, Cynthia and Andrea, and about how they have impacted my life.

If you follow NMID’s reporting, you’ve met Cynthia before. I shared part of her tale in an article we published in July about immigrants’ stories being key to the reform effort.

I connected Soledad and her daughters with Monica so she could include them in a recent radio report that aired across the nation.

I’m not sure how soon we’ll publish my next piece in this occasional series, but we thought the airing of Monica’s report was a good opportunity to introduce you to this project.

This is an experiment in doing documentary work. I’m excited and a little bit nervous. I hope you enjoy getting to know these women as much as I have, and that you are challenged and enriched by the experience like I have been.

One thought on “Documenting immigrants’ lives has challenged me”