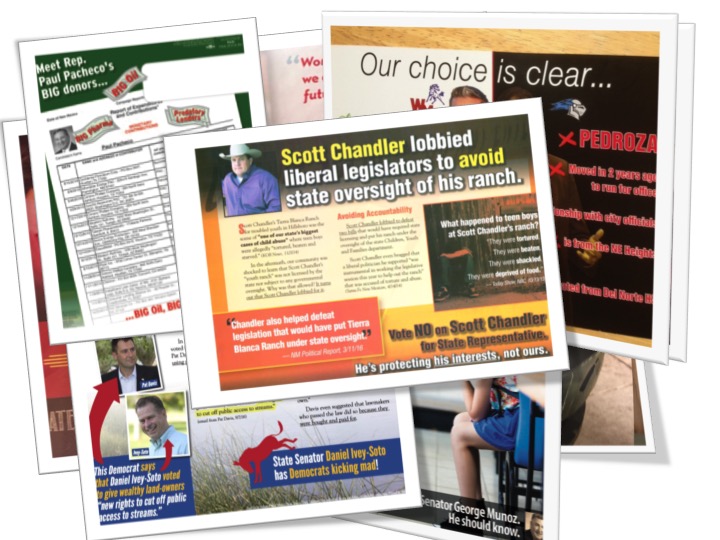 GOP House candidate Vicki Chavez wants her Deming neighbors to know she had nothing to do with the vicious attack ads.

Her Democratic opponent Candie Sweetser wonders if it will happen to her, too.

Mayor Ken Miyagishima expected some sort of attack in his Las Cruces reelection bid a year ago. But the super PAC assault didn’t work.

And what are those TV ads attacking Gov. Susana Martinez about, when she isn’t even running for re-election?

Campaign messages are everywhere these days – they arrive in mailboxes, appear on doorknobs, pop up on your computer, air on radio and TV. And it will only get worse as Election Day nears.

New Mexico candidates rely in large part on political mailers, hand-delivered fliers and radio ads to get their messages to voters.

But groups unaffiliated with political parties and campaigns are just as often the purveyors of such messages.

Candidates’ campaigns generally avoid getting dirty. The negative messages are typically delivered by political action committees that take unlimited donations and report the donations. But they report spending in aggregate amounts that can’t be tracked to a specific mailer or radio ad.

Often the attacks come days before the election, with little or no way for voters to know whose money paid for them.

That’s why New Mexico In Depth is collecting campaign messages as part of its Follow The Message project. When voters submit messages they’ve received, NMID adds information about who paid for the message and where their money comes from.

The rise of the super PACs

Outside groups gained such power after the 2010 U.S. Supreme Court decision in Citizens United allowed unlimited donations and spending as long as it isn’t coordinated with candidates or parties.

“It allows for corporations and unions to spend an unlimited amount of money for political ads, not just in the federal elections,” said Ciara Torres-Spelliscy, an associate law professor at Stetson University who wrote the book “Corporate Citizenship? An Argument for the Separation of Corporation and State.” “The way the Supreme Court wrote it was so broad, it also applied to state and local elections too.”

That means big money can make a big difference, especially in local elections from mayor to county commissioner to legislator.

“It’s really because these groups see that’s where they can make changes,” Atkeson said. “The states and the localities are the policy labs. They (donors) can influence these smaller contests in ways that it’s hard to figure out how to influence a congressional race.”

And the independent messages are out of candidates’ control, even though voters may not make that distinction.

Often, those messages from outside groups are negative: Smears on candidates they want to damage. Some recent messages in New Mexico aren’t even directly aimed at Nov. 8 elections, though it’s likely they’re intended to influence the outcome.

Here are some examples of how it works in New Mexico.

The race to replace retiring Democratic Rep. Dona Irwin in Deming could be a key to whether Republicans or Democrats control the state House next year.

Republicans took control of the House in the 2014 election for the first time in 60 years. There are now 37 Republicans and 33 Democrats.

But the GOP primary race between Vicki Chavez and J. Scott Chandler went to a recount. Chavez won by 16 votes. 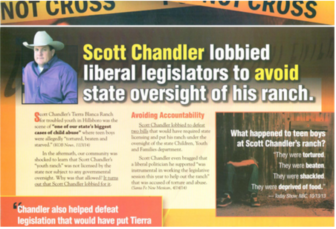 But between the close of early voting and primary day, the super PAC Advance New Mexico Now sent a series of at least three mailers attacking Chandler.

While she won the primary, Chavez doesn’t consider the Advance mailers a help.

Many voters, she said, believe she was involved in the attacks, even though super PACs aren’t supposed to coordinate with candidates or political parties.

“Locally, I feel like they hurt me,” Chavez said. “People are having a difficult time separating that I didn’t know about them. They believe that somehow I had to have known about it.”

“My husband’s a Republican, so I realized when I started getting the negative mailers,” Sweetser said. “It was horrible. It was horrible for both candidates. The candidate on whose behalf those mailers were sent (Chavez) was just as horrified as the candidate who was being attacked.”

In fact, Sweetser said, Chavez “came and recorded a radio ad saying she (only) knew about it when it arrived in her mailbox. There’s something wrong with the system, in my opinion, when something can be sent out so horrible.”

Advance New Mexico Now cited its success in defeating Chandler upon starting a Twitter account just after the primary.

Voters had a right to know about Scott Chandler’s ranch. pic.twitter.com/5tnSqlhmDg

UNM’s Atkeson agreed with Stetson’s Torres-Spelliscy that such campaign tactics are an outcome of the 2010 Citizens United decision. She noted that candidates typically run positive campaigns.

“That could be a problem for her in the race for the general,” Atkeson said of Chavez.

Candidates, meanwhile, are limited in the donations they can take.

Because super PACs aren’t supposed to coordinate with candidates or political parties, Chavez and Sweetser aren’t sure what to expect as Election Day nears.

“I haven’t heard of anything with fliers. I’m expecting it though,” Chavez said. “Unfortunately that’s something that we just don’t know.”

Said Sweetser:  “Vicki has assured me that nothing negative will come out of her camp and I have assured her the same.  What is looming out there is the negative impact of the super PACs. I don’t know what to expect. I’m hoping they back off.”

“Lipstick on a Pig” 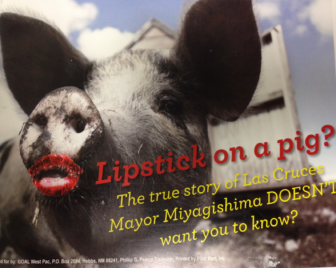 WestPAC sent out fliers maligning him last year, including one piece titled “Lipstick on a Pig”.

GOAL West is a federal super PAC based in Texas but fueled by oil and gas interests in New Mexico, with GOP Congressman Steve Pearce’s brother serving as its treasurer.

As with the Advance mailers in Deming, the GOAL West mailers went out days before the city election.

“They did it so that nobody could respond over the weekend,” Miyagishima said. “They hit it hard, as hard as they could.”

Miyagishima said he understood why oil and gas interests from the eastern side of the state might oppose him.

“I respect their business, and I understand that oil and gas contributes a fair amount to the state’s coffers,” he said. “I just happen to be one who would like to explore renewable energy.”

But Miyagishima won the mayoral race by more than 2,000 votes. The council candidates supported by GOAL West also lost.

The mayor said he understood that the super PACs acted independently.

“I’ve known Miguel for a long time. I still value our friendship,” Miyagishima said of Silva, who killed himself in January. “I don’t believe he had anything to do with it.”

Is it an election message? 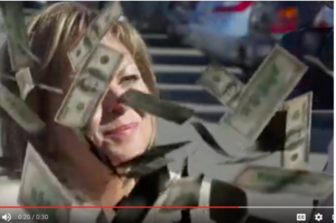 Cash floats over her photo. A stream is blocked to a child going fishing. Oil and gas wells pass inspections when they shouldn’t after the governor accepts campaign donations from the industry.

Martinez, a Republican, isn’t running for office. The ads don’t mention any candidates or issue before the Legislature.

So ProgressNow, a nonprofit, doesn’t have to disclose its funding for the ads in a campaign that likely exceeds $100,000 at this point.

But UNM’s Atkeson questioned whether the ads aren’t aimed at the election, even though they don’t mention it.

“I think they are sending an election message, because why else would they be sending it during an election?” she asked. “They’re trying to make campaign finance an issue… They’re not focused on any candidates, but they do seem to be highlighting a particular party.”

Torres-Spelliscy, the Stetson law professor who is also a fellow at the Brennan Center for Justice at the New York University School of Law, noted such undisclosed spending aimed at influencing elections is on the rise in states.

“If you’re clever enough to spend in politics, why do it in an accountable way?” she asked. “It’s become something that both the left and the right do.”