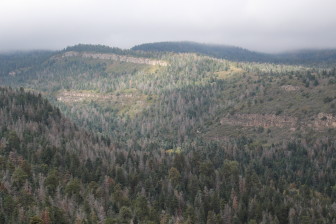 Recently, scientists from Los Alamos National Laboratory, Columbia University, the University of New Mexico and a pile of federal agencies and universities published a paper in the peer-reviewed journal, “Nature Climate Change” that predicts the disappearance of the Southwest’s pine-juniper forests.

It follows a 2010 paper about how warming is affecting southwestern forests and another in 2012 that found 20 percent of the region’s forests had been affected by beetle infestations and high-severity wildfires since the late 1990s.

In the new study, scientists simulated drought conditions to see how evergreen trees will respond to warming in the coming decades. Over five years, they studied how trees perform certain functions, like photosynthesis and the absorption of water during drought.

They found that earlier mortality estimates were too low—and projected that by 2100, pine-juniper forests in the southwestern U.S. will be gone and more than half the evergreen trees in the northern hemisphere will have died.

That large-scale die-off may have global impacts.

As the authors point out, forests absorb carbon. If tree die-offs continue at this rapid rate—exacerbated by warming temperatures and more extreme drought events—that carbon absorption function could be diminished enough over the next century to further accelerate warming.