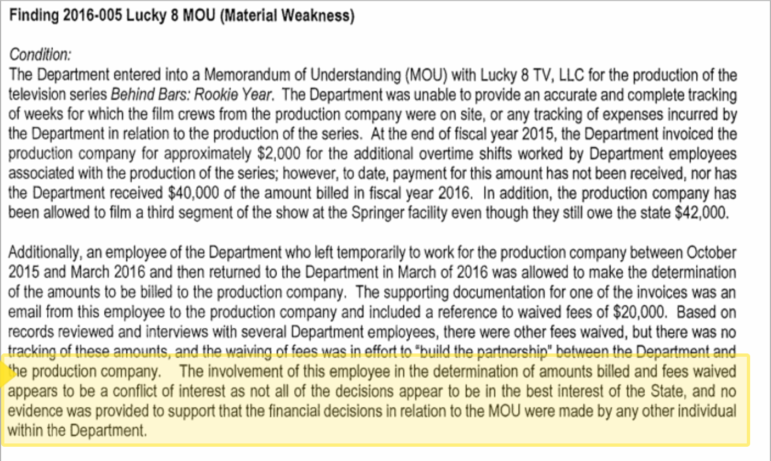 A former deputy cabinet secretary at the New Mexico Corrections Department was put in charge of the financial relationship between the department and a television production company for which she had worked only months before, according to a new report from the state Auditor’s Office.

It appears that Alex Sanchez waived at least $20,000 in fees owed by Lucky 8 TV, LLC, to the Corrections Department in June 2016 after having left  the company’s employ just three months earlier, the report shows. The state Auditor’s evidence for that claim is an email Sanchez sent employees of the company in which she noted the waived fees for the filming of Lucky 8’s prison reality series, “Behind Bars: Rookie Year.”

The Corrections Department could not provide any evidence or documentation that anyone other than Sanchez determined the amounts to be billed to the production company.

Additionally, Lucky 8 was allowed to begin filming a third season of its show last year even though the company still owed the state $42,000 from the previous two seasons, the audit found.

The arrangement amounted to a conflict of interest in which “not all of the decisions appear to be in the best interest of the state,” the auditors said.

Sanchez, a former television reporter, went to work for the department as a spokeswoman in 2013. She left Corrections in October 2015 to work with the company on “Rookie Year,” then returned the following March as a deputy cabinet secretary of administration in charge of, among other things, the department’s $315 million annual budget.

Sanchez is now a deputy superintendent for the state Regulation and Licensing Department.

State Auditor Tim Keller’s report did not name Sanchez, but New Mexico In Depth has independently verified that she is the employee auditors were referring to.

“It’s obviously driven by this revolving door situation, which we see often where somebody goes from industry to government and then back again,” Keller said. “In New Mexico, that in and of itself can be OK. The question is the function and job duties of that person. In this situation, as our auditors found, there was a clear conflict of interest.”

Reached by telephone Thursday, Sanchez said she had not seen the audit report and asked that a reporter send her a copy before commenting. She replied later with an email that said she oversaw invoicing and payments from Lucky 8, but those decisions were made by her subordinates.

Sanchez said in a subsequent email that she “never individually waived fees” for Lucky 8. Rather, she said, then-Corrections Secretary Gregg Marcantel and others decided not to charge the company a full rate for days the crew only spent a few hours at the prison.

Marcantel said in an interview that he was not aware of any fees that had been waived for the company. He said he never approved any waivers and never waived fees himself.

The revelations come at a time when legislators are once again debating whether New Mexico should have an independent ethics commission. Lawmakers are carrying bills during the legislative session that ends next week. If one passes and voters approve it, New Mexico would cease to be one of a handful of states without an ethics commission.

If it’s created, an ethics commission would consider complaints about conflicts of interest and other matters.

Auditors found systemic problems that allowed Sanchez to supervise how money flowed between Corrections and the company and that raise larger questions about how the department operates. The Corrections Department had no system to track billing and fees in accordance with its contract with Lucky 8, or to protect against conflicts of interest — in this case, that a former employee of the company wasn’t in charge of the financial arrangements, as the audit found.

“This typically points to a tone at the top that is not overly concerned with tracking down every dollar that’s being spent in the department,” Keller said. “When there are inadequate controls, it leaves the door open for folks to take advantage of the lack of controls.”

In an emailed response to NMID’s questions, Corrections Secretary David Jablonski acknowledged Keller’s findings and said the department is “correcting all of the deficiencies.”

Marcantel hired Sanchez, a reporter for KRQE-TV in Albuquerque at the time, as his spokeswoman in 2013. The union that represents corrections officers harshly criticized him when he brought her back to the department from Lucky 8 in 2015 as his deputy secretary at a $100,000 annual salary. The union questioned her credentials to oversee the department’s budget. Sanchez, who at the time went by Alex Tomlin, has a bachelor’s degree in communications from West Texas A&M University.

Marcantel, who retired in October, said Thursday that he was confident in Sanchez and that she had been “vigilant” in avoiding conflicts as his deputy. He confirmed that she oversaw the financial relationship with Lucky 8 as part of her job, but added that he would have expected employees who worked under her “to be handling the actual transactions, where the rubber meets the road.”

Asked whether Sanchez should have been responsible for financial dealings with her former employer, Marcantel told NMID: “In hindsight, I guess you could say, if it’s becoming a story now and it’s an issue of perception, the answer is no.”

“Again, in hindsight, there could have been some walling or something like that to remove her completely,” he said. “I would have to take responsibility on that.”

Auditors did not find evidence of any criminal wrongdoing, and Sanchez is not accused of a crime.

However, Keller’s report identified potential violations of the Governmental Conduct Act, which forbids state agencies from “taking any action favorably affecting” companies represented by anyone who has been a state employee within one year; the Corrections Department’s code of personal conduct, which bars conflicts of interest; and the anti-donation clause of the state Constitution.

The latter is a legal gray area, Keller said, because the clause usually refers to a company or individual receiving money from the government or a government employee — not the waiving of fees.

“It’s unclear whether or not that would be a violation, and that’s why documenting justification would have been necessary,” Keller said, adding that part of the reason for his finding was a significant lack of documentation for how Lucky 8 was paid or how those payments were approved.

For example, the only record of Sanchez apparently waiving fees for Lucky 8 was a single email she sent to employees of the production company in June 2016, according to the audit report.

The email, provided to NMID by Keller’s office after a request under the New Mexico Inspection of Public Records Act, showed that Sanchez referenced a waiver of $20,000 in fees the company owed for filming in March and April of that year as “trade to cover costs of commercials and air time.” Sanchez left the company in March 2016.

Other Corrections employees told auditors that Sanchez waived additional fees as well, a contention supported by records they reviewed, the report says. But auditors could find no evidence that those waivers — which other employees believe were used to “build the partnership” between Corrections and Lucky 8 — were tracked.

Noting the other employees’ comments in the audit report was unusual, Keller said.

“It’s such a big deal,” he said. “Senior management, at the secretary level and their CFO level, should have been aware of that and had answers for it, but they did not.”

Lucky 8 was to pay Corrections $3,000 a week for filming during the first season of “Rookie Year,” $5,000 a week for the second season and reimbursements for staff overtime, according to a contract between the company and the department, also provided to NMID after a public records request.

But Corrections officials were “unable to provide an accurate and complete tracking of weeks for which the film crews from the production company were on site, or any tracking of expenses incurred by the department in relation to the production of the series,” the audit report says.

Marcantel said he didn’t know why the money wasn’t tracked. “It certainly should have been,” he added.

Lucky 8 has since paid the $42,000 it owed the state, Corrections spokesman S.U. Mahesh said in an email.

In their report, auditors recommended that Corrections develop a system to track billings and fee waivers and “comply with state regulations and ensure that taxpayer funds are not being used to supplement the filming of the television series.”