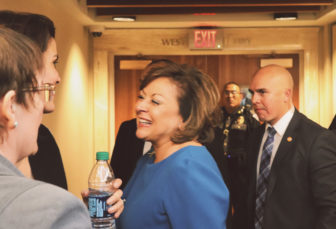 New Mexico school districts that had hoped to put a little more cushion in their budgets managed to persuade a sympathetic Legislature, but couldn’t get it past the governor’s veto pen.

When she signed the 2018-2019 budget on March 7, Gov. Susana Martinez struck a line through $5 million state lawmakers had set aside to repay some school districts  whose cash accounts had been swept by $40. 3 million to help fill a large budget gap in 2017.

Martinez had called the cash accounts of school districts “slush funds.” State superintendents — who drove to the capital en masse during the session to lobby lawmakers for repayment — call them reserve accounts that are used to make large payments like annual insurance, as well as extras like giving teachers stipends to take students to science camp.

School leaders said during testimony in Santa Fe that taking the cash out of their accounts had hurt their ability to deal with unexpected expenses.

Tom Sullivan, superintendent of the Moriarty-Edgewood School District, said his district had to ask the state for emergency supplemental funding this year — essentially emergency loans — to deal with what has been an ongoing decline in enrollment that he had managed with reserves before the sweeps.

“Not sure that amount would have been a silver bullet to immunize us from any further supplemental needs, but it would have been some help,” Sullivan said via email. “Our local budget problems were certainly exacerbated by the cash sweeps last year and any ‘reimbursement’ would have been positive for us.”

Public schools were a beneficiary of a more flush state budget this year with the resurgence of the oil and gas industry. Teachers received a $2,000 increase in the base wage of the three pay tiers, as well as a 2.5 percent raise. And K-12 schools received $2.54 billion of the state’s $6.3 billion budget.

“Governor Martinez and the Public Education Department have responsibly increased funding by over $400 million for the state’s public schools since 2011 without putting any additional burden on the taxpayer — including unprecedented increases in starting teacher salaries, across-the-board pay increases for our educators, groundbreaking awards for high-performing teachers, and more funding going directly to districts, schools, and classrooms than ever before,” Lida Alikhani, spokeswoman for the Public Education Department, said in a statement.

There is still the chance that some extra money could make it into public school coffers this year. The Legislature included language in the budget bill that gives the PED authority to send any unallocated State Equalization Guarantee money (the largest portion of public school budgets) to districts. Depending on what money comes in from the federal government by the end of the fiscal year in June, schools could see up to $10 million that would be sent to districts based on their funding formula — which is based on factors such as the number of students, their school size and special needs.