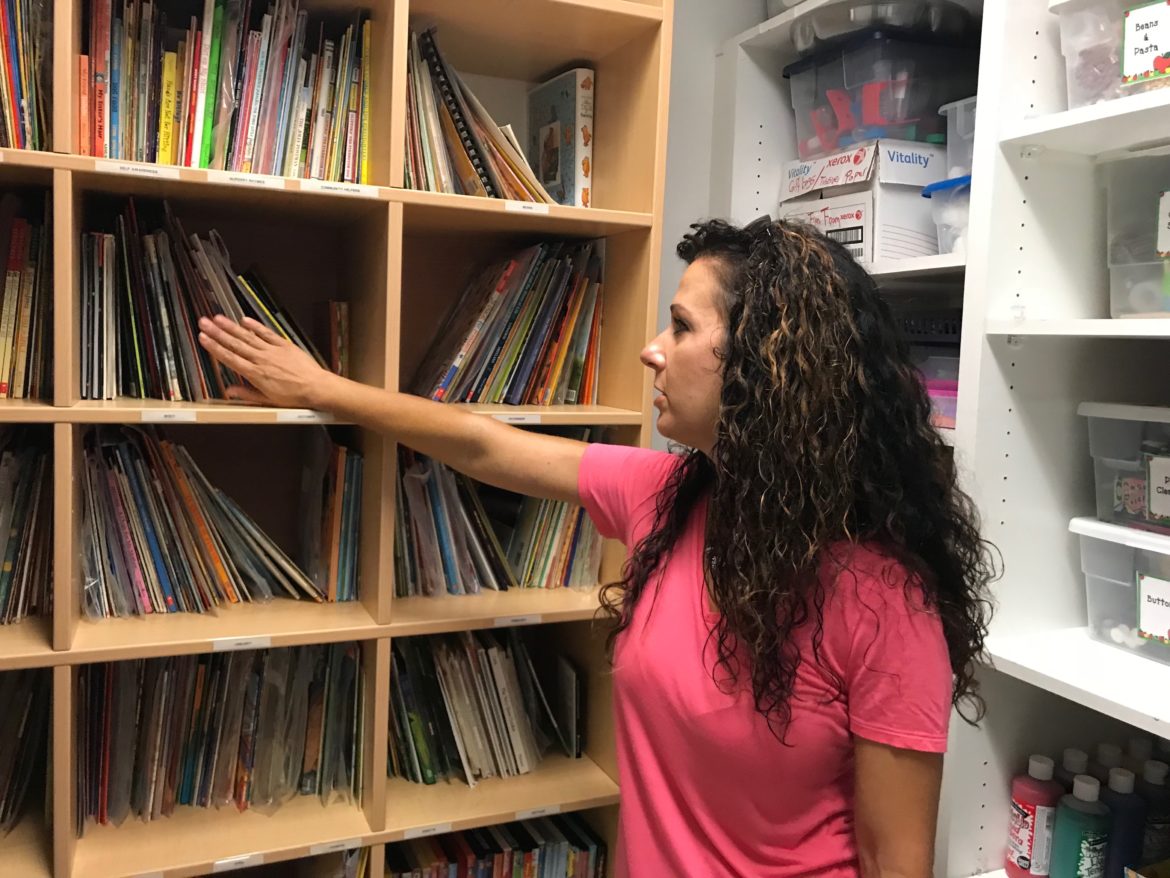 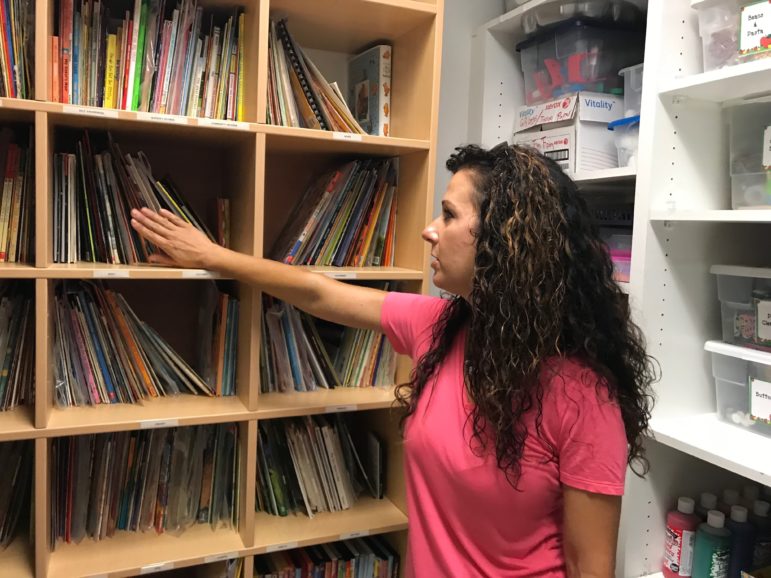 Heleme Brinkerhoff, Sonoma Elementary’s first New Mexico PreK teacher, spent last Wednesday morning setting up her classroom, a project that’s taken about two weeks. There were the magnetic tiles and blocks to sort, a puppet theater to put up, and books, crayons, scissors and crafting materials to organize.

A longtime Kindergarten teacher, Brinkerhoff said she loved little children and play-based learning, so she was excited for the chance to prepare 4-year-olds academically, socially and emotionally for their K through 12 educations. “It’s like my dreams came true,” she said.

“I’m looking forward to taking it down a notch,” Brinkerhoff said. “I know where they need to be in Kindergarten, which I think is totally going to benefit me. I want to make sure I am able to bring it down to the 4-year-old level.”

This week she and other New Mexico PreK teachers and teaching assistants at seven elementaries at Las Cruces Public Schools will be in training for the upcoming school year. The pre-approval process for registration is going on now.

What: New Mexico PreK full day and half day classes

How: Registration will take place from 9 to 11 a.m. Aug. 9. All New Mexico PreK students must be accepted into the program prior to registering for classes. To get pre-approved, contact the Title I Office at 575-527-6624. Parents or guardians must bring child’s original birth certificate at the time the application is submitted.

The new preschool classes are part of the Public Education Department’s $4.37 million expansion to 11 school districts that didn’t have NM PreK programs in place, and part of a larger $10 million boost to the program across New Mexico.

That expansion has opened up preschool opportunities for 124 children in the district.

Sonoma Principal Melissa Galaz didn’t really have room at her school in the city’s fast-growing East Mesa —  it’s jam packed with students and teachers and is the second largest elementary in the district. But she considers herself an early education proponent and she made space.

“We have quite a few parents who were interested in having that, and their children didn’t qualify for either Head Start or DD Pre,” Galaz said, about programs specifically for low-income and developmentally delayed children.

The district has been steadily expanding its Head Start program. When Maria Artiaga became LCPS’ Head Start director in 2013, there were 10 classrooms. Last year, there were 18, and there will be 21 in the year ahead. But Head Start is mostly limited to children from families below the federal poverty line, or to children who are homeless, in foster care or on public assistance. DD Pre works to prepare children with developmental delays for school. New Mexico PreK is open to every child, regardless of family income, though the program is targeted to schools with a high percentage of children who qualify for free or reduced price lunch.

Artiaga, who is now director of federal programs for the district, said that between Head Start, New Mexico PreK and DD Pre, there will be preschool classes in all but two of the district’s 20 elementary schools. Fairacres and Central do not have space for preschool classrooms, though the district is hoping to change that.

Artiaga said LCPS will fill its Head Start classrooms first, then assign children to NM PreK based on a random selection of pre-approved applications — and try to place children in the school they are set to attend for Kindergarten through fifth grade. She said the state made clear it didn’t want NM PreK slots taking the place of Head Start.

“What they don’t want to see is fighting for kids,” she said. In three areas of the state, New Mexico PreK classes have ended up supplanting Head Start — with New Mexico sending back valuable federal dollars for preschool services in a state where only about a third of children are getting them and 34 percent of children under 5 live in poverty. 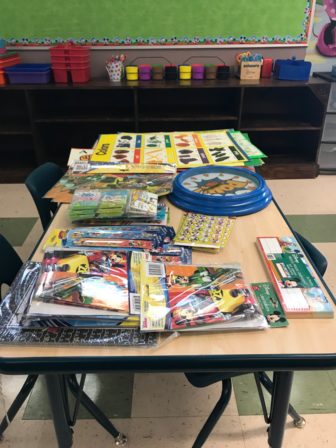 Piles of materials need to find a home in Heleme Brinkerhoff’s preK classroom at Sonoma Elementary in Las Cruces.

Erica Surova, director of the Center for Community Analysis at New Mexico State University, has been tracking access to early childhood services in Doña Ana County for the Success Partnership, which has been working toward universal access in the county.

She believes there is opportunity with the expansion to blend state and federal dollars through combined Head Start and NM PreK classrooms, giving more kids access to the services and making preschool more effective for low-income children in the district. Right now, New Mexico policy has kept the programs separate, but the PED has been studying that option.

“When you bring them into the classroom and mix them together, it’s not detrimental to the group as a whole, but it tends to bring up the academic performance of those students that are from lower income families,” Surova said. “That’s been shown over and over again. So I think it’s really important at some point that that happens.”

Surova believes there is some stigma attached to Head Start because it serves low-income students, and that Head Start gets a bad rap in New Mexico because many of the rural programs can’t attract teachers with early childhood education bachelor’s degrees.

That’s not the case at LCPS.

Artiaga says her teachers all have bachelor’s degrees — which research has shown improves the quality of preschool — and most of the educational assistants have associate degrees in early childhood education. Because this is the first year of the program at LCPS, classes for New Mexico PreK and Head start will be separate, but she aims to mirror the programs so there is no difference in quality or services in any classroom. 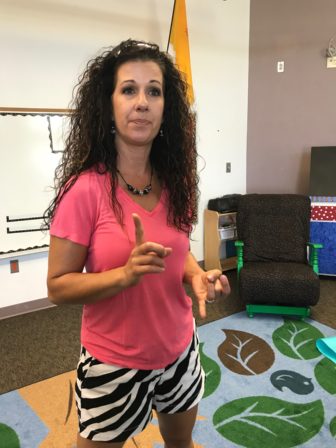 NM PreK teacher Heleme Brinkerhoff said she loves using play to teach the littlest kids, and that her background as a Kindergarten teacher will help her prepare them for school ahead. She had been hoping Las Cruces Public Schools would get the state preschool program.

In fact, it has been LCPS Head Start’s degree requirements and pay scale that has kept the district from applying for New Mexico PreK in the past. When the opportunity to apply came up several years ago, Artiaga said she couldn’t make the numbers work with the per-student funding.

This year, the reimbursement rate is higher, and the district also received $100,000 in start up money to equip the classrooms with tiny tables and chairs, plus all those fun learning tools.

“I have never said no if there is any funding out there,” Artiaga said. “Because if we can use it to advocate or support even one more child, it’s one more child you’re going to be reaching and one more family.”

With New Mexico PreK now in place at the district, Artiaga said it sets the stage for the program to grow and improve.