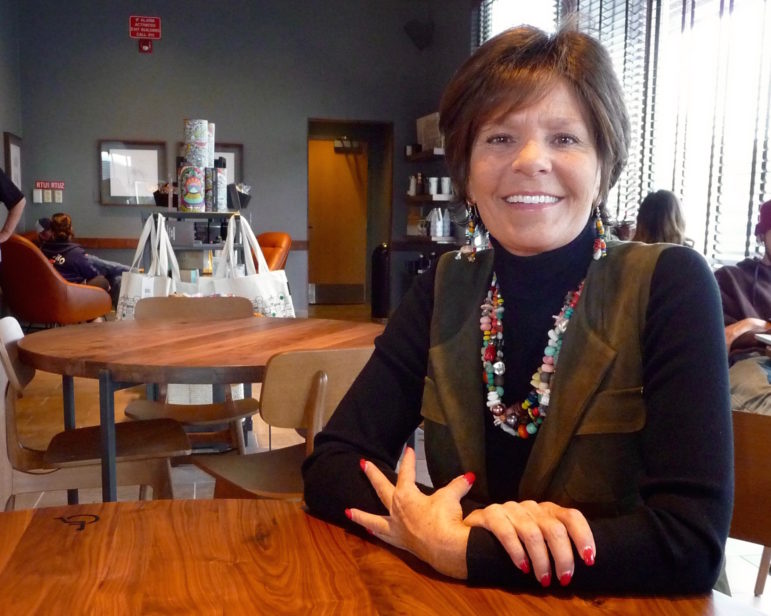 With Tuesday night coming to a close, it appeared Republican Yvette Herrell was heading toward victory in one of the state’s premier races. The 2nd Congressional District had been one of the races to watch, with the future control of the U.S. House hanging in the balance, but Democrats took control without needing the vast southern New Mexico district.

As of 11 p.m., Herrell was leading Xochitl Torres Small by about 51.6 percent to 48.4 percent in the race, with 355 out of 501 precincts reporting. Herrell gave a victory speech around 10:45 p.m., while Torres Small was mingling with the crowds at the Democratic watch party in Las Cruces awaiting final results from Doña Ana County.

The question was: Would Democratic voters in Doña Ana County carry Torres Small over the top in a conservative district that for much of its 50-year history has elected Republicans? Could they get out less frequent voters such as young people and Hispanics? Or would Herrell pull out a win on strong support from the district’s more rural counties? 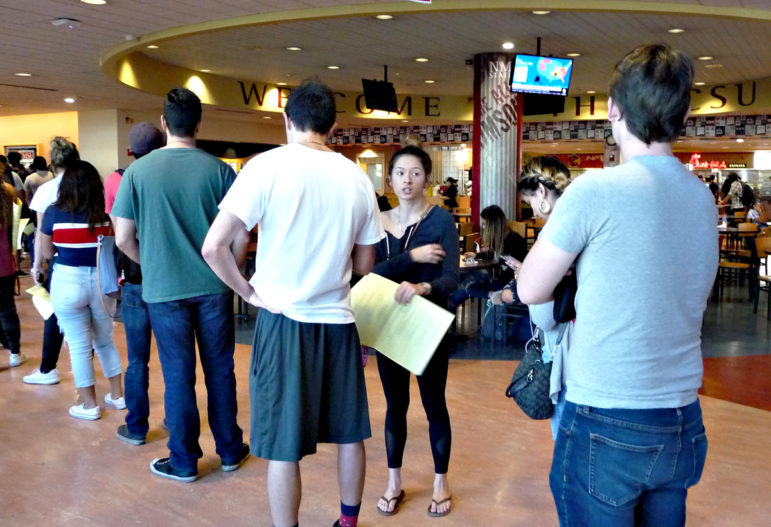 New Mexico State students stand in line at the student union waiting to vote in midterm election on Tuesday.

In Las Cruces, 19-year-old student Katrina Perlman might not have known how to pronounce her name, but she was ready to support Xochitl Torres Small for the U.S. House seat. “I’m excited for her specifically,” the New Mexico State University student said as she stood in a long line of other students waiting to vote in the student union. “We need more women in Congress.”

Still, it didn’t appear that Torres Small’s home county had enough numbers to make up the nearly 5,000 vote lead as of 11:15 p.m., with only partial results in, but 48,022 votes counted. Nearly 36,000 votes were cast early in the county. There were some glitches at the polls, and people were still in line at 7:30 p.m. at 12 of the county’s 40 voting centers, which delayed results. 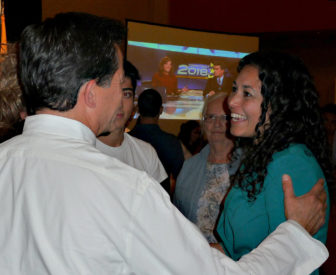 Democrat Xochitl Torres Small talks with a supporter at a Democratic watch party in Las Cruces Tuesday night. The candidate did not concede the race despite a nearly 5,000 voter lead by Republican Yvette Herrell.

Torres Small was not conceding “until every person’s voice is heard,” she said.

Whoever won the race, history would be made in the district.

An Albuquerque Journal poll released Sunday showed how close the race was; Herrell was ahead of Torres Small by just 1 point, 46-45.The narrowness of the margin came after the candidates had spent months crisscrossing a massive district that at 71,739 square miles is slightly bigger than Washington state, and more than $12 million in spending — through the month of October — that paid for a relentless stream of attack ads and mailers.

The race had major themes: voter enthusiasm and turnout, and the nationalizing of a race that pitted two women on opposite sides of the fence on immigration, abortion, health care and support for President Trump.

The southeastern conservative mostly rural part of the of state has long chosen who represents the district in Congress. The only time since 1980 that a Democrat won the seat, he was an oilman from Hobbs. Conservative Democrats in Doña Ana County, the most populous county in the district, have historically dominated but that began to change in recent elections when a progressive wing began to rise in Las Cruces. There have been efforts to increase voter registration and turnout among low-voting young people and Latinos.

Despite efforts from both women to keep the race about southern New Mexico, the national political climate and high stakes in Congress made this race about President Trump’s agenda.

Herrell, an Alamogordo real estate agent, argued that she was the candidate who best represented the values and priorities of the conservative-leaning district. She was unapologetically supportive of Trump, touting his tax cuts and the economy, Supreme Court picks and renegotiation of the NAFTA trade agreement, and was mostly in line with his immigration policies, with some nuance thrown in as a resident of a border district.

“It’s family values. It’s Second Amendment. It’s pro-life.  Everybody knows I’m very pro-business,” Herrell said in an interview with New Mexico In Depth in October. “Those kind of values are shared with many of the voters.”

Torres Small ran as a moderate who said she would work with anyone to address the issues New Mexico faces, such as rural access to affordable health care, immigration and expanding trade. She opposed Trump’s wall, but called for “strong and smart border security” that kept out drug smugglers and human traffickers, and for work visas and skills-based immigration — and for a pathway to citizenship for “Dreamers.”

“I think that sometimes parties can get in the way of solutions. And I wanted to be focused on problem solving instead,” Torres Small said in October.

The chance for Democrats to flip the House and the rare competitive nature of the district race meant people were watching from across the nation — political parties and consultants, national media and donors.

Torres Small tripled Herrell’s fundraising, $3.8 million to $1.2 million, according to the final campaign finance documents filed before Tuesday’s election. Outside groups outstripped both candidates combined, spending a little more than $7 million several days before Election Day. That’s $12 million spent in the race to date — before final figures will be filed in several weeks.

Voters’ mailboxes and TV screens were flooded with political advertisements from outside groups and candidates alike.

Two of her ads— “Immigration” and “Fix,”— talked about her plans for securing the border without building a wall and providing a pathway to citizenship for those without a criminal record. Her ads “Too Common,” “How Many,” and “Hands” talk about lowering healthcare costs and providing affordable healthcare access for rural New Mexicans. Torres Small has also tried to appeal to Republican voters with her ads “Hunt,” “Hometown,” “Person Not the Party” and “Together.” All of these TV ads talk about how Torres Small wants to work with anyone despite their party to fix New Mexico’s problems. A couple of the ads feature Republicans saying they are going to vote for Torres Small instead of Herrell.

Herrell’s ads were less focused on herself and against Torres Small. Four of the six ads on her YouTube channel are attack ads. The ads say that Torres Small supports late-term abortion, government-run healthcare, open borders and that she was “bankrolled” by Nancy Pelosi. Pelosi has given $4,000 to Torres Small, and the Pelosi-affiliated PAC to the Future donated $10,000.