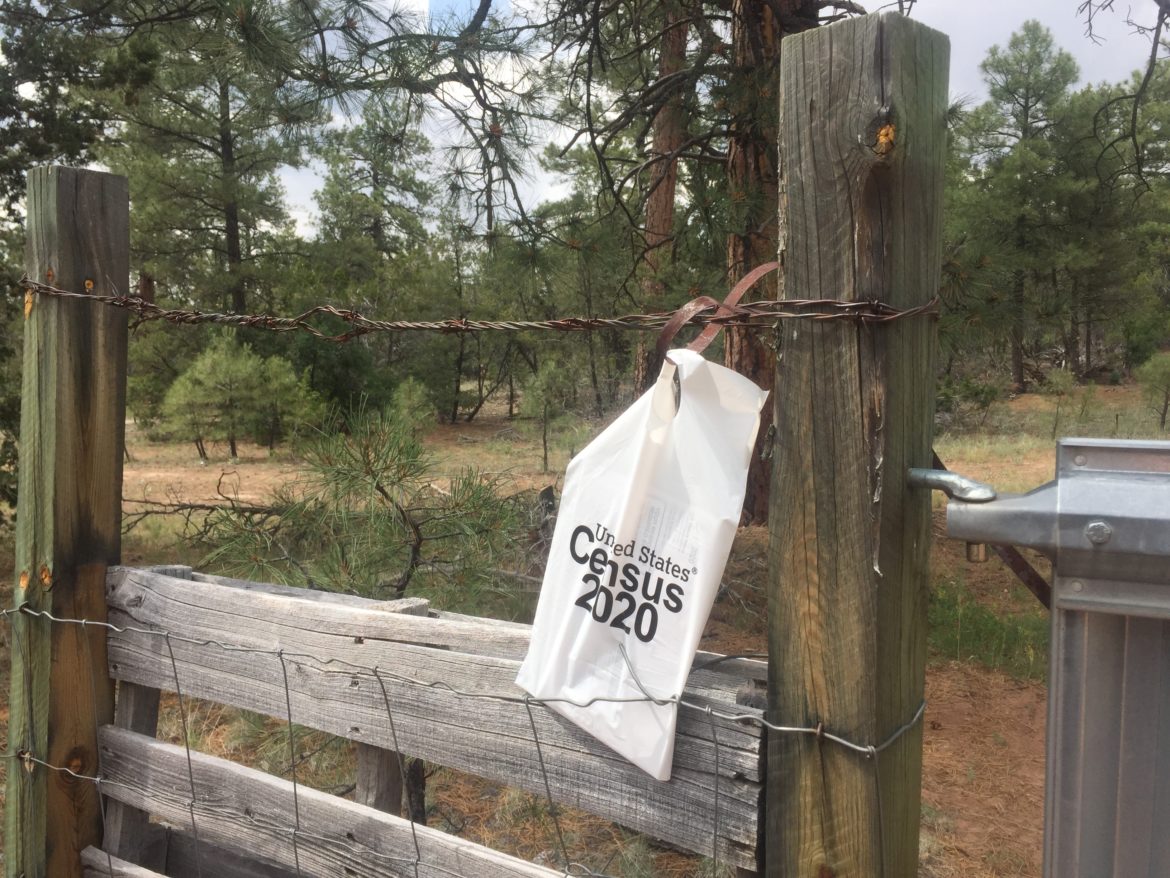 The COVID-19 pandemic has exposed long standing social and economic inequities that many say are at the root of a highly disproportionate number of Native Americans afflicted with the illness. Native Americans make up more than half of the state’s positive coronavirus cases —  the majority are in San Juan and McKinley counties — but just 10.9% of its population, according to census data.

As 2020 nears its halfway point, the pandemic threatens to worsen inequities in another way: the stunting of an ambitious and energetic rollout of the 2020 census count on tribal lands that will determine the amount of money going to the state’s tribes over the next decade.

Already designated a hard-to-count population, the pandemic has contributed to a staggeringly low census response rate so far from tribes — a result census officials hope to turn around during the summer into the fall.

Robust responses from the tribes, officials at the census emphasize, would ensure tribal communities receive their equitable share of  federal resources to help pay for healthcare, housing, roads, and a range of other important services. In New Mexico, where nearly every school district receives education dollars through the Title I program geared to assist low-income students,  90% of Native American students attend Title 1 schools, according to the NM Native Census Coalition. Census responses also help determine the amount of money flowing to housing programs, such as the Section 8, Indian Community Development Block Grants and the Indian Housing Block Grant that supports new or reconstruction of homes on tribal lands. And health programs determine operational plans, the largest serving 2.2 million Native Americans through the Indian Health Services, based on census data.

New Mexico has one of the lowest response rates so far, at 50% compared to the national average of 61%. Even lower are tribes within the state, with just over half having response rates below 20% as of this week.

But, authorities hope to boost those rates and increase the chances that New Mexico’s tribal communities receive an equitable share of federal dollars as census workers resume door-to-door counts in the coming months.  How tribal members respond could be measured in the millions of dollars, positively or negatively.

It was a balmy 22 degrees in southwest Alaska when the U.S. Census Bureau Director, Steven Dillingham counted the first household in a decade in the village Toksook Bay. The first count of the census is traditionally taken in remote Alaskan villages in January while frozen ground makes remote communities accessible, this year on an island off the Bering Sea that is home to the Alaskan Native Nunakauyak.

“The census is so important because it helps remote villages like ours receive important community resources now and into the future,” said Robert Pitka, Nunakauyak tribal administrator said in a press release after the count that day, acknowledging the crucial role the census plays in determining how much federal money tribes will receive for the next decade based on their size.

With ambitious goals to give the most accurate count of Indian Country in history, on March 15 census workers expanded beyond Alaska, delivering door-to-door census packets to tribal households in rural areas, like tribal reservations.

Then, just three days into the census operation in March, all field operations were suspended and tribes began their fight against a global pandemic that has infected more people in some tribal communities than the census has counted.

“The fact that they even have any response is pretty remarkable, because nobody got an invitation,” Tim Olson, associate director of field operations for the U.S. Census Bureau, said about low response rates during an online roundtable in May with the National Congress of American Indians.

Now, nearly six months after the kickoff in Toksook Bay, tribes are finally reopening for census workers to drop census packets at doors in their communities. And the deadline for the census count has been extended from July to the end of October.

Over the last few weeks tribal members in the Navajo Nation, several Pueblos and Mescalero Apache have opened their door to find a packet from the Census. More tribes could open for workers in the next few weeks.

“Now that you’ve got the opportunity at your door, please fill out that form and get it back to the census bureau,” said Olson.

The response rate of the Navajo Nation and the state’s 19 Pueblos demonstrates the challenges ahead for the Census.

While the national response rate stood at 61 percent as of this week, the Navajo Nation is at just 2.2% since census workers started delivering packets two weeks ago. The 19 Pueblo tribes in New Mexico with available response rates ranged from 5% to 43%. The Mescalero and Jicarilla Apache tribes as of this week had logged just over 16% and around 5%, respectively.

Pueblos are much smaller and compact geographically than the Navajo Nation, with a territory larger than 10 U.S. states that is home to about 175,000 tribal members. New Mexico’s 19 Pueblos and Ysleta Del Sur in Texas have a combined 66,000 members. How soon census workers are able to count each Pueblo will depend on each tribe’s public health order.

New Mexico census officials worry about estimates that say the state could lose up to $780 million if the state is undercounted by just 1 percent. There are important details to ensuring the census count is complete and accurate.

When responding to the census, people should enter  tribal affiliation the same way it is officially listed in the U.S. Federal Register. In a June 10 press release the Speaker of the Navajo Nation encouraged members of the Navajo Nation to “respond with the word ‘Navajo’” on the census form instead of the traditional Diné. If a person has multiple tribal affiliations, they should list their primary or enrolled affiliation first.

People who live in multi-tribal homes and fill out the census as families are encouraged to list their respective tribal affiliations on the census questionnaire.

“With so many needs in Native communities, it is very important that Native people are counted accurately so that the distribution of federal funds is fair and equal,” Zuni Pueblo Governor Val Panteah said.

According to the 2010 census, 78 percent of Native Americans live off tribal lands.

Those who live in urban places with permanent addresses should go ahead and respond when they get their census packet in the mail, according to the census. But for those who live in rural or tribal areas, they should wait until the packet is dropped at their door. That’s because of the way the 2020 Census was planned.

Those who have permanent addresses will receive a packet in the mail and can respond to that either online or through the mail. Most of these should have arrived in the mail by now.

But for rural homes without mail delivery, the Census is dropping packets at the door with unique numbers that identify the location of the house. An interactive map of where these rural areas are located shows vast stretches of New Mexico—both tribal and non-tribal communities–designated for such door-to-door packets.

Olson said that even if a tribal member has already responded through the mail or the internet, they should go ahead and return the packet they find on their door.

“In the ideal world, the perfect happy world where everything is supposed to happen like it should be, households would wait to respond until they receive their questionnaire packet delivered by a census employee in a rural area,” he said.

But anyone in those areas who has already responded to the census online, should just do it again when they get their packet delivered, he said.

“It sounds like kind of a hassle but the easiest, simple way is for them to respond again so they can be absolutely certain that they are included in the census,” Olson said.

With more than 400 different tribes represented in the city, Albuquerque has the sixth largest urban Native population in the country and plans to open community response centers at municipal facilities as they re-open. It also will provide resources on its website.

As New Mexico’s biggest city, Albuquerque attracts Native Americans from smaller pueblo and Navajo communities. Some wind up on the streets or live with relatives but with no permanent address. It’s estimated that there are 44 percent of Native Americans who are largely unsheltered.

Because of this, the city’s count is coordinated with advocacy groups and other health organizations that work with unsheltered people. This network of groups can quickly locate and provide information to their clients, an important task when the census expects to conduct a two-day count of homeless people. COVID-19 precautions set back the operation for specialized census takers like Isaiah Curtis to count people at shelters, meal distribution sites or known encampments across the city.

“Here in Albuquerque we have very vulnerable people living on the street, especially urban Native Americans living off the reservation,” said Curtis, who is leading a census count of Albuquerque’s unsheltered population. “A lot of them come from the reservation to Albuquerque for better opportunities or better services.”

He works for a Complete Count Committee (CCC) whose goal is to get an accurate count of Albuquerque’s Native American homeless population.

In 2019, an executive order from Gov. Michelle Lujan Grisham provided $3.5 million for census promotion and resources for hard-to-count areas such as rural and tribal communities. $2.4 million was set aside for New Mexico counties to conduct their efforts through a CCC, including $400,000 for committees focused on reaching tribal residents.

Curtis said the homeless community, while considered part of the Urban Native American population, often has a tribal residence. This means part of their effort is to determine if a person they encounter in the city should be counted at their tribal residence or with a city location.

The census expects to complete its count of this population in a two-day window September 22-24, so long as public health orders due to COVID-19 don’t interfere.

Editor’s Note: We incorrectly identified the body of water near Alaska as the Baltic Sea, not the Bering Sea. We have corrected that. We regret the error.