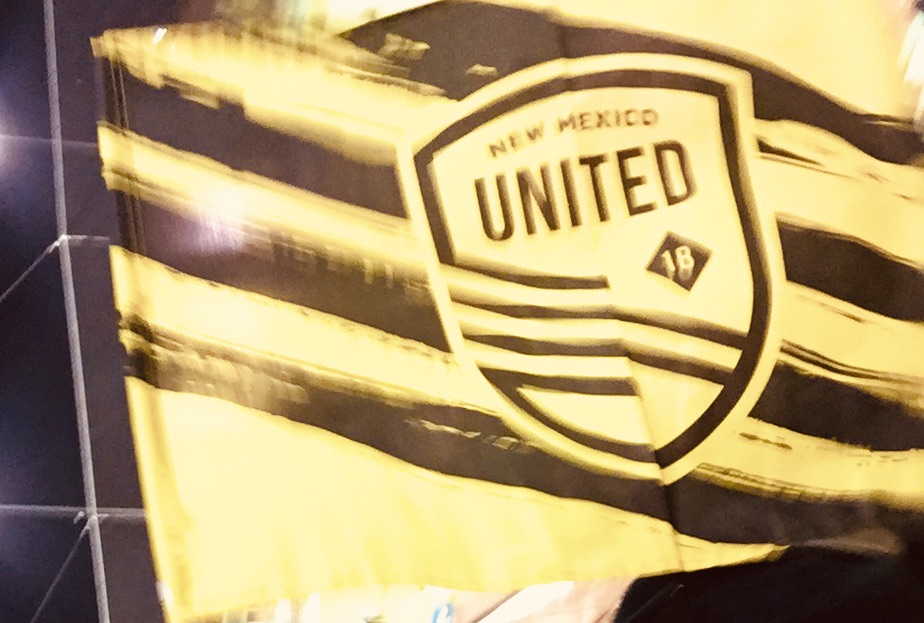 Albuquerque voters will decide in November whether the city should foot the bill for a new soccer stadium. Unlike a proposal to build a downtown multi-use arena that percolated in the mid-2000s, this one could become reality.

That’s because the city has a new professional soccer team that has proven popular. New Mexico United games in 2019, its first year, drew more than 12,000 fans on average to its Albuquerque matches in the city’s baseball stadium.

Now, the team wants the city to build a stadium specifically for soccer, which, according to a feasibility study commissioned by the city, is required under United Soccer League (USL) rules after a team’s third year.

But the payoff for Albuquerque in economic terms is far from certain, according to multiple economists who said publicly financed sports stadiums rarely justify the expense with new jobs or economic activity.

And there are concerns among some residents about the impact of the stadium on surrounding neighborhoods, as well as how millions in public dollars could be better spent.

Lisa Padilla, the president of the Barelas Neighborhood Association, said she has mixed feelings about the construction of the new soccer stadium. Two of the recommended locations are in Barelas, a historic downtown neighborhood.

“You see people from all walks of life and all backgrounds at their games and I think that that’s really special,” Padilla said. “As far as building a stadium, I guess, I think that there might be better ways to spend our money. But if it were to be an economic driver for our community, I can see how investing is a worthwhile strategy.”

New Mexico United announced it would contribute $10 million toward the facility and pay $800,000 in annual rent for 25 years. The team would also agree to invest in surrounding neighborhoods through a negotiated community benefits agreement. The facility would likely be in a neighborhood bordering downtown, although voters will make the decision without any firm guarantee about where the stadium will be built.

But the cost would be borne primarily by state and local funds. Albuquerque would issue bonds worth $50 million. State lawmakers and the governor have already committed almost $5 million through the state’s infrastructure budget.

Using public funds to build sports stadiums is an old story across the country, as cities strive to keep professional sports teams. In Albuquerque, the city forked over about $25 million in 2001 to renovate the old Albuquerque Sports Stadium, built in 1969, to become its Isotopes baseball park.

The current proposal appears to have strong support among residents. According to Albuquerque’s January 2021  Citizen Perception Survey conducted by Research & Polling, Inc., 63% supported building a multi-purpose facility that could be used for New Mexico United games and other events, while just 23% opposed. In a previous 2019 survey, almost half said they supported using public funds for a soccer facility.

City officials claim the project will boost the quality of life in Albuquerque, which will help attract more economic activity to the city. But research doesn’t show much economic benefit from spending public money to build stadiums, said economists who spoke to New Mexico In Depth.

There is no evidence that building stadiums results in any significant income or employment or taxable sales growth in cities that invest in public sports facilities, Victor A. Matheson, a professor of economics at The College of The Holy Cross in Worcester, Mass. and a former Major League Soccer and USL referee, said in a phone interview.

In a recently signed letter of intent between the city of Albuquerque and Peter Trevisani, the owner and CEO of New Mexico United, the city asked United to bring a women’s soccer team to Albuquerque within three years of the stadium’s completion. If this happened, the arena would see more use.

The city’s feasibility study suggests the stadium could be used for state soccer championship games, which the study says historically attract 10,000 attendees across three days. And in the draft lease agreement, 15 calendar days are reserved for city use of the stadium.

City officials, though, say that the $50 million isn’t just cash laying around. Rather, the city would issue bonds to pay for the stadium, and still have enough bonding capacity left over for other projects.  And unlike other infrastructure projects, a stadium would generate revenue, sufficient to pay for operating costs in addition to rent payments to the city.

Whether or not a new stadium brings significant tangible economic benefits, city officials and economists agree there are a host of intangible benefits connected to being home to a professional sports team.

Lawrence Rael, Albuquerque’s chief operating officer, said in an interview that benefits include an increase in the city’s quality of life, which would help economic development.

At an August city council meeting, Rael described the economic benefits as very real, but hard to quantify. “It gives us an opportunity to showcase Albuquerque,” he said. “… not just as a sporting venue, but as a community that’s growing and developing, and it can only help us (by) attracting additional businesses and… folks to New Mexico.”

Businesses that are looking to expand and grow, especially after the pandemic, are looking at quality-of-life factors for their employees, he added. “This gives us one more tool in the toolbox to present to these economic development opportunities.”

Leeds described such quality-of-life benefits as the “atmospheric type of impact” that are similar to any type of amenity — a symphony, a beach front or a museum, for example — that makes a city a more enjoyable place. “That is obviously much, much harder to measure,” he said. “But … you know, certainly cities can be positively impacted in ways that have nothing to do with dollars and cents.”

Albuquerque voters in November will also decide who they want for mayor.

Incumbent mayor Tim Keller is on the record supporting the stadium, and asked the council to put the question before voters rather than make the decision themselves. In a video posted on the New Mexico Black Voters Collaborative Facebook page, Keller restated his enthusiasm for the stadium during the group’s mayoral candidate forum last weekend.

“I just want us to remember I think it’s OK to have… activities that cost five bucks for a family to go enjoy some sports,” Keller said. “It’s minor league soccer, just like it’s minor league baseball. It’s not the NFL, it’s not Major League Baseball. This is just something about future generations for our city and what our city looks like 40 years down the road. We got to do that at the same time as address our urgent issues.”

His two opponents are against the proposal.

“I just think it’s going to be just another bad project much like the Albuquerque Rapid Transit, much like Spaceport America, much like The Rail Runner,” said Eddy Aragon, a radio host and the lone Republican in the race. “The city of Albuquerque will lose out on any sort of benefit for a stadium.”

“I believe we should focus our spending on basic services, rather than wasting $70 million on an over-the-top soccer stadium,” he said in an email.

Padilla worries that, if the stadium were to be built at 2nd Street and Iron Avenue, people who’ve lived in the Barelas neighborhood would be priced out “from this place that is so beloved and so important to so many.”

Keller said at a recent mayoral forum that the recommended sites are currently “empty space.” But they’re near low-income communities, and the 2nd Street and Iron location is adjacent to organizations that serve homeless residents. Homelessness in Albuquerque has skyrocketed in recent years.

Steelbridge, a non-profit organization that helps people experiencing homelessness, addiction and trauma, sits directly across the street from the location of the new stadium if it were to be built at 2nd Street and Iron Avenue. The organization didn’t respond to New Mexico In Depth about whether they support the proposal. Also nearby is the Good Shepherd Center, run by the Catholic religious order the Brothers of St. John of God. It also serves homeless residents. Brother Nick Foran, executive director, said the organization wouldn’t comment until after the election.

Padilla and other neighborhood leaders are putting together ideas for what they’d like to see in a community benefits agreement before a lease is signed. And they’re pushing to be included in the negotiations, if the stadium is built in their neighborhood or any other one.

Keith Romero, the vice president of the board of directors of the Barelas Community Coalition, said in an email that the stadium is a transformative opportunity that could bring meaningful change to downtown and the Barelas neighborhood, particularly when a community benefits agreement can be a “potential vehicle” to assure that resources are allocated to a range of issues, like poverty, homelessness, (a) living wage, affordable housing, health care, crime and education in these regions of the city.

“… We want whatever community is impacted to have a seat at the table in terms of negotiating amenities because really that’s what it comes down to is amenities to the impacted community and mitigation of gentrification,” Romero said during a phone interview.

The election is November 2.

About Bobby Brier for New Mexico In Depth

Bobby Brier is a journalist and second-year student currently pursuing a master's degree in journalism from New York University. Passionate about covering stories about fair housing and criminal justice reform, he seeks to shed light on these issues as they evolve over time. He is the creator of After The Huddle Sports, a blog dedicated to telling the stories of athletes through a sports journalism lens. He earned a bachelor's degree in English from Saint Joseph's University in Philadelphia. Reach Bobby at rmb610@nyu.edu.