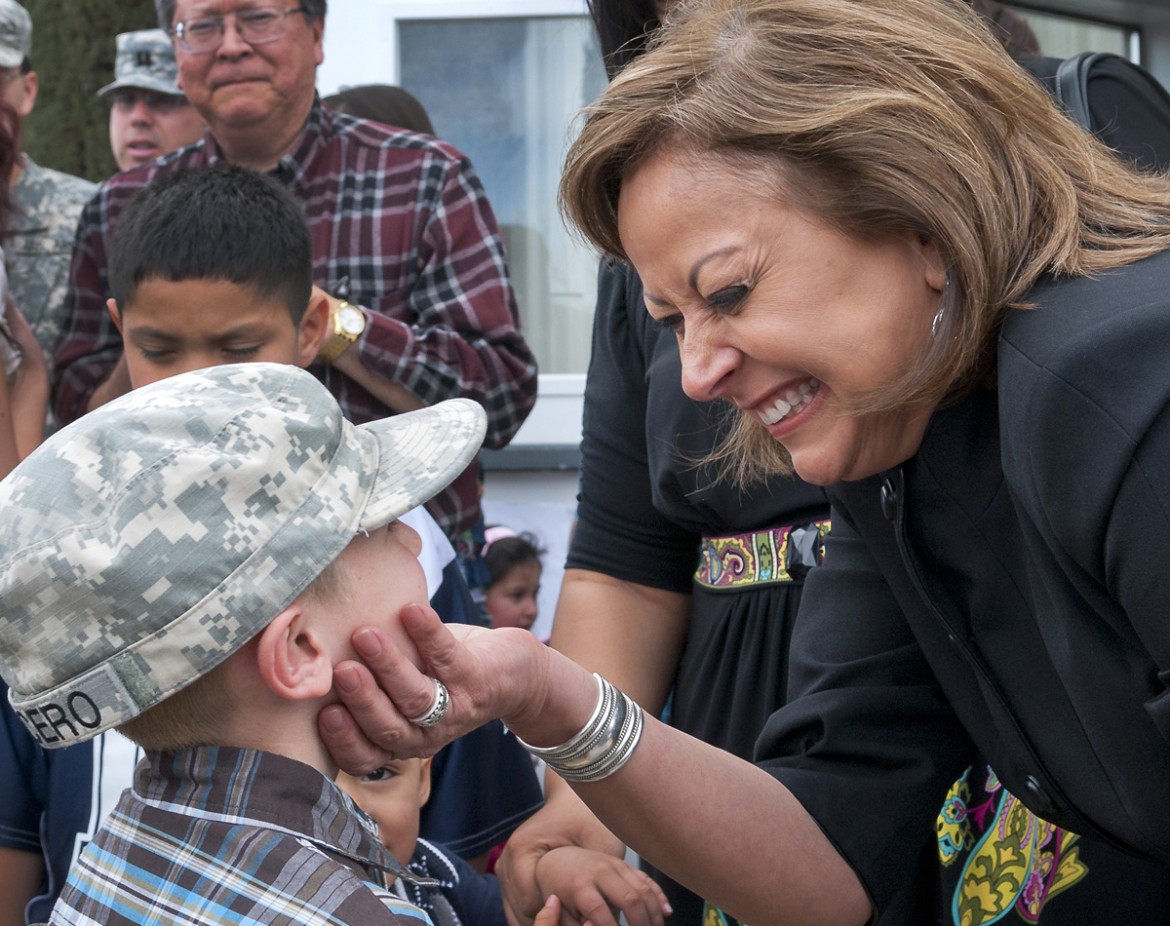 Gov. Susana Martinez shares a moment with Tyler Lucero, 7, of Alamogordo, who is wearing his father’s hat after a Yellow Ribbon Ceremony in Las Cruces in January. Martinez says her vision centers on improving education so New Mexico’s children are equipped to land good jobs and attracting those jobs to New Mexico so the state’s children can stay here if they choose.

Gov. Susana Martinez shares a moment with Tyler Lucero, 7, of Alamogordo, who is wearing his father’s hat after a Yellow Ribbon Ceremony in Las Cruces in January. Martinez says her vision centers on improving education so New Mexico’s children are equipped to land good jobs and attracting those jobs to New Mexico so the state’s children can stay here if they choose.News

Susana Martinez says balancing the budget in her first year in office made everything else possible that she’s accomplished during her first two years as New Mexico’s governor.

Back to main article:
• Combativeness could harm legacy, some say
Related post:
• About NMID’s first series

Martinez immediately went to work with lawmakers after being sworn into office to address a $450 million shortfall. The state Constitution requires a balanced budget, and it’s a requirement other governors have met.

Here are other accomplishments Martinez listed during a recent interview with New Mexico In Depth at her home in Las Cruces:

• Working with lawmakers to appropriate more funding for education and Medicaid in her first two years than the Legislative Finance Committee proposed, and doing it without raising taxes.

• Shifting priorities by directly allocating money in the state budget to specific education items such as the purchase of a pre-SAT test for every 10th grader, rather than allocating money to education through a general formula that has “less accountability and a more limited ability to measure its impact.”

• Temporarily increasing 82,000 government employees’ pension contributions by 1.75 percent and reducing the state’s contribution by the same amount, which helped balance the budget.

• Capping the state’s film subsidy at total annual payments of $50 million, which Martinez said made it “predictable for us to be able to prepare a budget.”

• Exempting some products and services from gross receipts tax to help construction and manufacturing businesses.

• Eliminating the locomotive fuel tax, which convinced Union Pacific to move its rail hub from El Paso, Texas to nearby Santa Teresa in southern New Mexico. It’s a move lawmakers had approved before Martinez was governor. But Union Pacific didn’t make the move then because of financial issues. On Martinez’s watch the state eliminated the tax again and the stars aligned; now the rail hub is under construction and helping create a booming industrial park in Santa Teresa.

• Creating a six-mile overweight zone around the Santa Teresa Port of Entry. That allows trucks coming from Mexico to carry up to 96,000 pounds, instead of the normal 80,000 pounds, of cargo to industrial parks in Santa Teresa. In places without such zones, trucks have to unload some of their cargo into another truck at the U.S.-Mexico border. The shift has increased efficiency and led several companies to move their business to Santa Teresa.

• Winning approval of a new law that establishes an A-F grading system for schools, which Martinez said is simpler and easier to understand than the federal No Child Left Behind system it replaced.

• Expanding funding to make permanent the K-3 plus program, which extends the school year by five weeks for disadvantaged students in those grades.

• Signing a bill that lets judges strip those convicted of public corruption charges of some or all of their public pensions.

• Expanding a DNA collection law to require that a sample be taken from anyone arrested for a felony crime in New Mexico. The law previously only allowed DNA collection for certain felony arrests.

• Increasing the size of the state’s reserve fund, which had been depleted during the tenure of former Democratic Gov. Bill Richardson, from 4.9 percent to 13.5 percent.

One thought on “Martinez lists her top accomplishments”