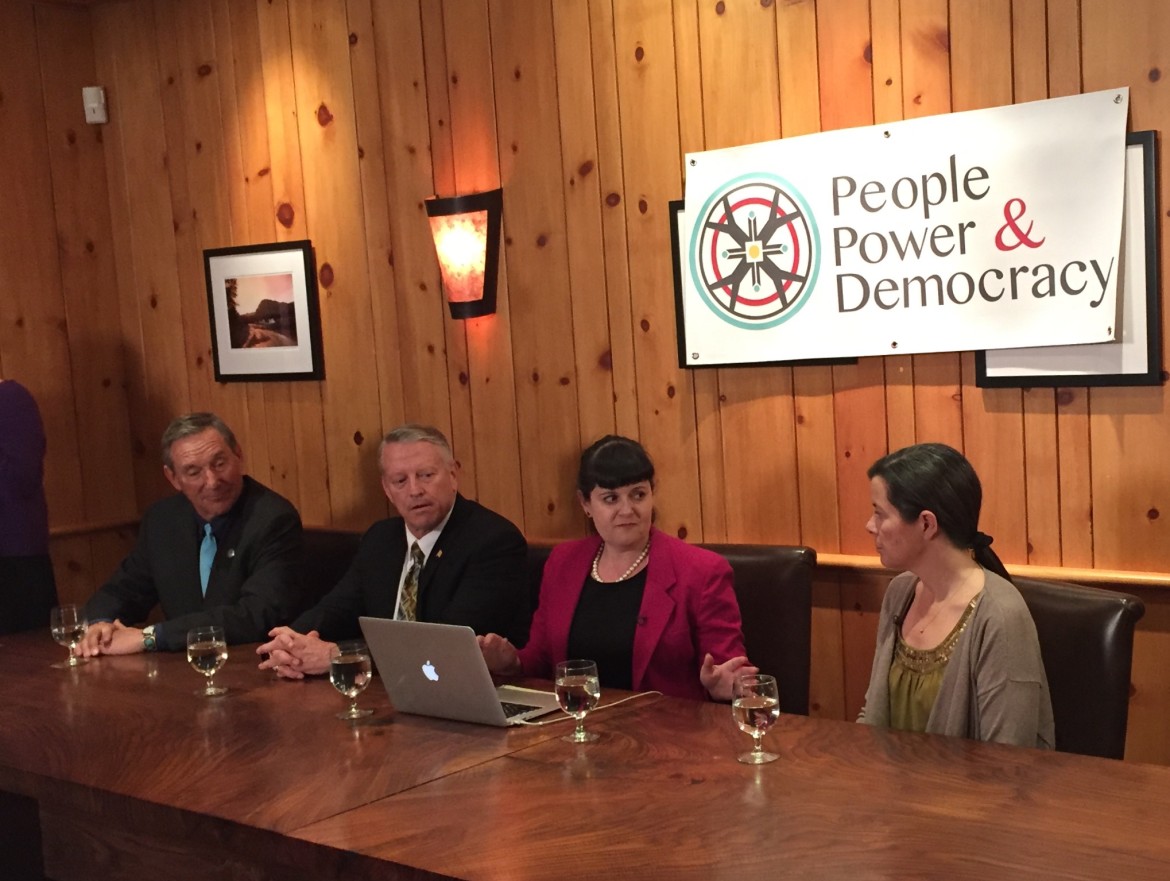 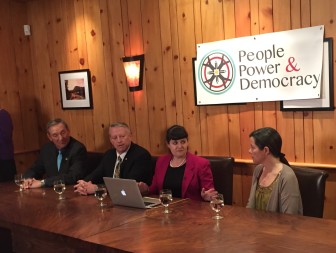 There should be a better way of prioritizing and funding public infrastructure projects, but the solution shouldn’t take away lawmakers’ ability to fund some projects in their districts, lawmakers said Wednesday night at a forum in Santa Fe.

Sen. Sander Rue, R-Albuquerque; Sen. Bill O’Neill, D-Albuquerque, and Bill Soules, D-Las Cruces, each spoke at the event, billed as a discussion of “Restoring Public Trust.” The conversation surveyed New Mexico’s eroding faith in government and explored ways to repair it, including reforming the state’s system of infrastructure funding, which critics complain is sidetracked by pork barrel politics. It was hosted by the People, Power and Democracy project, a government reporting collaboration between New Mexico PBS, KUNM News and New Mexico in Depth.

Clamping down on money in politics and the perception that campaign donations buy votes would help restore faith in government, said Viki Harrison of Common Cause. She also urged lawmakers to pass a bill establishing an independent ethics commission, require more disclosure from lobbyists, and take politics out of capital outlay funding.

The way capital outlay allocations are made each year has come under scrutiny in recent years. Critics say the system makes it difficult for the state to accomplish much-needed regional projects, such as major highways, bridges, water systems and university facilities, because the money is distributed through a political system that tends to fund a greater number of smaller, local projects.

In March 2015, the state auditor found more than $1 billion allocated through capital outlay remains unspent because the projects weren’t shovel-ready, weren’t requested or approved by local governments and other reasons.

“Some kind of system or matrix needs to be put in place [to better vet projects], but leave some money for legislators, for things like library blinds and playground equipment—because if you aren’t going to do it, nobody else will,” Rue said.

Kristina Fisher of Think New Mexico outlined her group’s proposal to move decisions about infrastructure funding away from state lawmakers and give most of the power to a commission modeled on the existing Public Schools Capital Outlay Council.

Rue, who has made transparency legislation a hallmark of his career in the Senate, is sponsoring legislation that would create a public database of projects that receive capital outlay funding and list which lawmakers allocated how much money to them. Right now, each lawmaker’s list of funded projects is kept confidential. The public can see it only if the lawmaker gives his or her permission.

But not all lawmakers are even aware that their capital outlay allocations are exempt from the state’s Inspection of Public Records Act.

O’Neill said he didn’t know the list was off-limits until he received an email from New Mexico in Depth asking him to release it.

“I take pride in my capital outlay,” he said, “I send emails and brag about it.”

O’Neill told the audience he was willing to release his list of allocations.

“Of course you can have where I spent the money, and I wish more people cared,” said Soules, who had already released his list to New Mexico in Depth.

Rue said he was surprised that so many lawmakers don’t want to release their allocations. “It’s amazing to me (that it’s not public) that there are some folks who chafe at that…Why shouldn’t I have to explain to constituents (how I spent the money). It may be unpleasant but I should be expected to explain it.”

Although the lawmakers expressed concerns about taking control over local projects away from the Legislature, they did agree that there is a problem with getting bigger projects done.

“There’s no vetting of the process,” Rue said, pointing to the Public School Capital Outlay Council as a model. “We need to create a matrix, rank and score projects, so we can look at the matrix and see where the needs are,” he said.

O’Neill said the state can do better at making sure projects that receive funding are ready to go.

The current criteria for the Legislature to evaluate such projects is frequently ignored.

State Auditor Tim Keller, sitting in the audience, told the panel the state should focus on clawing back unspent capital outlay and putting it to use.

On Thursday, Sen. Joseph Cervantes, D-Las Cruces, introduced a bill that would return such money to the state’s general fund.

“If it takes years to build a project after funds have been allocated, money should not be requested until the planning is closer to completion,” Cervantes said in a press release. “With our unacceptable rate of unemployment, it is time to put dormant dollars to use.”

But in a legislative session that only lasts 30 days, and will be dominated by discussions about the state budget and the governor’s public safety agenda, it will be a challenge to change a system that allows lawmakers to green-light projects in their districts with the stroke of a pen.

“It’s the most tangible thing I do as a legislator,” O’Neill said Wednesday.

Watch the entire discussion on KNME-TV’s New Mexico In Focus: