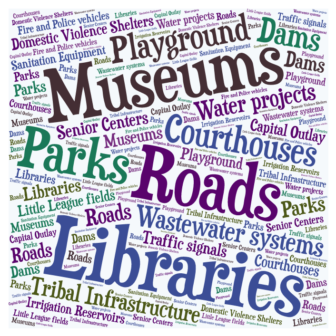 Hundreds of millions of infrastructure dollars sit unspent across New Mexico as state lawmakers search for cash to cover a budget deficit.

And with only $60 million available, it’s unlikely the Legislature will fund the usual number of projects in their districts this legislative session.

Capital outlay bills are typically a top priority every year for the Legislature, funding everything from new and renovated state buildings to small local projects and, in some years, highway improvements.

Some hope that lack of money this year will spark talk of reforming a system where individual lawmakers allocate money for specific projects but rarely reveal exactly how they spent the money.

That pork barrel process, unique to New Mexico, has contributed to the vast amounts of money sitting unspent on projects that either aren’t wanted, don’t qualify, aren’t ready to start or aren’t fully funded.

In addition to the rarity of individual lawmakers allocating money for specific projects, the system often lacks oversight. The inconsistency in  planning requirements — planning is required for statewide projects but optional for local governments — contributes to the accumulation of unspent dollars.

No other state in the nation allows  individual lawmakers to allocate money for specific projects. But in New Mexico, each lawmaker typically gets a specific amount of money each year to earmark.

“We are the only state in the entire United States that does capital outlay funding the way that we do,” Linda Kehoe, a staff person for the Legislative Finance Committee, told members of that committee in December.

“We have governors who sit in these workshops and they kind of drop their jaws, ‘You do what?’ ” she said, referring to out-of-state events she attends.

But how far the reform effort goes is the big question as the 60-day session begins.

More than $462.4 million worth of bond money for infrastructure projects enacted by the Legislature remained unspent through October. More than half of that was for about 1,770 local projects earmarked by lawmakers.

“The biggest, biggest problem is that they’re not a planned project and they have way too little money to get the project moving,” Kehoe told the lawmakers.

Often, she said, a project costing hundreds of thousands of dollars receives only a fraction of that cost from the Legislature. Without additional funding, the projects don’t get done.

While lawmakers hold control of the infrastructure purse strings, it’s difficult to determine exactly how individual legislators allocate their money.

Those bills both failed in 2016, but Rue said the second try might be easier.

“The second time around, I have a feeling some of these guys are going to soften,” he said.

Rue recalled attending a meeting with constituents where he distributed his infrastructure allocation list.

“People were thrilled that I did that and appalled that it wasn’t public information,” Rue said. “It’s amazing to me that we have to debate that the public has access to this information”

Last year, Think New Mexico pushed for legislation to take individual project funding out of lawmakers’ purview. The non-partisan think tank recommended a commission to vet and rank proposed projects with lawmakers as a final seal of approval, similar to the public school infrastructure funding process.

Gov. Susana Martinez also called for such reform, and labor unions and business organizations endorsed it.

But a House committee killed the bill after lawmakers voiced concerns about their inability to fund projects in their districts.

While lawmakers in cities often pay for projects such as parks and playgrounds, rural lawmakers struggle trying to fund larger needs such as road repairs and water systems.

If a committee made such decisions, she said, “I don’t think those dollars are going to flow back to my area. We just don’t have the political power or influence.”

“The individual legislative members want to be the exclusive determinator … as opposed to a committee,” he said. “There is a desire to maintain that autonomy.”

While Cisneros and others may sponsor reform bills this session, others are trying to make administrative changes.

In October, a working group of legislative staff, administrative staff and representatives of county and municipal groups made recommendations to the Revenue Stabilization and Tax Policy Committee.

Creating a statewide committee to recommend projects topped the list.

Some of those actions could be enacted as rules by legislative leaders.

Regional councils of governments should be more involved in the process, too, said Hector Quintana, a consultant with New Mexico Association of Regional Councils, which represents all seven councils.

The councils often sponsor forums or hearings for local governments seeking infrastructure funding before the legislative session begins, he said.

“One of the other things we would like to see happen is more legislators actively participate in these hearings so they can better understand it before they get up there,” Quintana said.

Auditor Tim Keller, a former state senator, is suggesting that projects be eliminated if they aren’t moving after seven years. That might motivate local governments to spend the money, and lawmakers to adjust their priorities.

“It’s a blunt instrument that ends the problem,” Keller said. “Really it should be like five years or four years.”

Keller also said there should be a single capital outlay administrator overseeing the status of projects.

“We really think there should be a singular point of contact in the state of New Mexico,” he said. “We just don’t have that at all. The money is spread throughout 86 different agencies.”

But at December’s Legislative Finance Committee meeting, Sen. John Arthur Smith, D-Deming, highlighted how difficult reforming the process can be.

“What I really appreciate about this reform effort we undertook is that we started it in my first session,” Smith said, pausing before adding “only 28 years ago.”