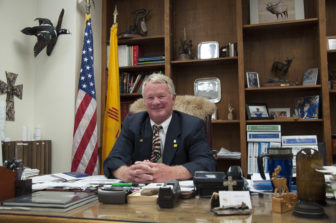 Sixty percent of Lyon’s $268,000 — garnered from 172 donations — comes from companies or individuals employed in the oil and gas or agriculture industries, which are principle sectors that do business with the State Land Office. Half of that amount, or 30 percent of his total funds, comes from companies that have active leases with the State Land Office. Those lessees are largely oil and gas companies, ranchers or dairy producers.

Garcia Richard has raised $220,000 from 1,036 donors, 72 percent of which are $200 or less. Her big donors are primarily labor unions and tribes. Only 49 of her donors live outside New Mexico. Seven of her donors are ranchers, contributing a total of $3,875

The money advantage going into the general election season greatly favors Lyons. He reported $183,568 on hand in early September, compared to Garcia Richard’s $32,816. Garcia Richard had to spend down her funds to win a highly competitive primary election, unlike Lyons.

In his bid to be New Mexico’s next state land commissioner, Lyons is running on his past record and experience in the office. Garcia Richard says if that’s his argument, then, “I’m going to come back with, he’s been our only land commissioner that’s had one of his very poor land decisions have to be overturned by our New Mexico State Supreme Court.”

Back in 2010, the court overruled a land swap Lyons had coordinated in White Peak for failing to follow public auction requirements. That exchange, Lyons contends, would have created contiguous lands open to hunters in an area where it’s tough to see the line between state trust and private land.

“I was just trying to keep someone from getting shot,” he says.

In an audit released at the end of Lyons’ second term, Attorney General Hector Balderas found inadequate documentation and arbitrary appraisals, the results of which he estimated cost New Mexicans millions of dollars. Lyons insists his deals were above-board and that boxes stacked in the corner of his office are full of documents to prove it.

Former land commissioner Ray Powell says the office has struggled with openness. When he first took over at the state land office in 1993, his stationary arrived without any contact information printed on it.

“I said, ‘What’s the deal here?’” he recalls. “And they really scratched their heads and looked at the floor, and said, ‘We were told not to put it on.’ And I said ‘Why?’ And they said, ‘Because if we do, they’ll call us.’

“It was a closed shop and flew under the radar, and that’s how you got away with so much.” 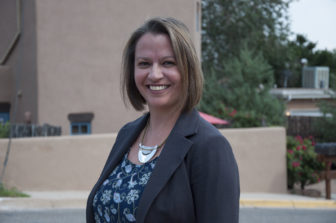 One way Garcia Richard says she’s tried to steer clear of those historic troubles and put herself in position to better advocate for New Mexicans when it comes to getting their fair share from oil and gas starts before she’s even in office. The royalty rate is set by state statute, and she argues it’s too low.

“That’s benefitting the individual and not the state, and if you want to look at campaign finance reports, you might be able to find out why,” she says. “So this is why I get accused of demonizing the industry, and I feel like, it’s not appropriate for me — when I’m going to be sitting across the table negotiating with someone, it’s not appropriate for them to fund my campaign.”

It’s a principle current Commissioner Aubrey Dunn has also shown some traces of. In 2017, he announced he was returning $4,500 in campaign contributions from a company and its principal officer after they sued him over his policies crafted to protect the Ogallala Aquifer.

Lyons took issue both with the idea that Garcia Richard wasn’t taking money from those with a special interest in the State Land Office, arguing that her campaign finance reports show donations from ranchers.

“Contributions don’t influence what I do. They never have for 26 years. I do what I feel is fair for the state of New Mexico,” he says.