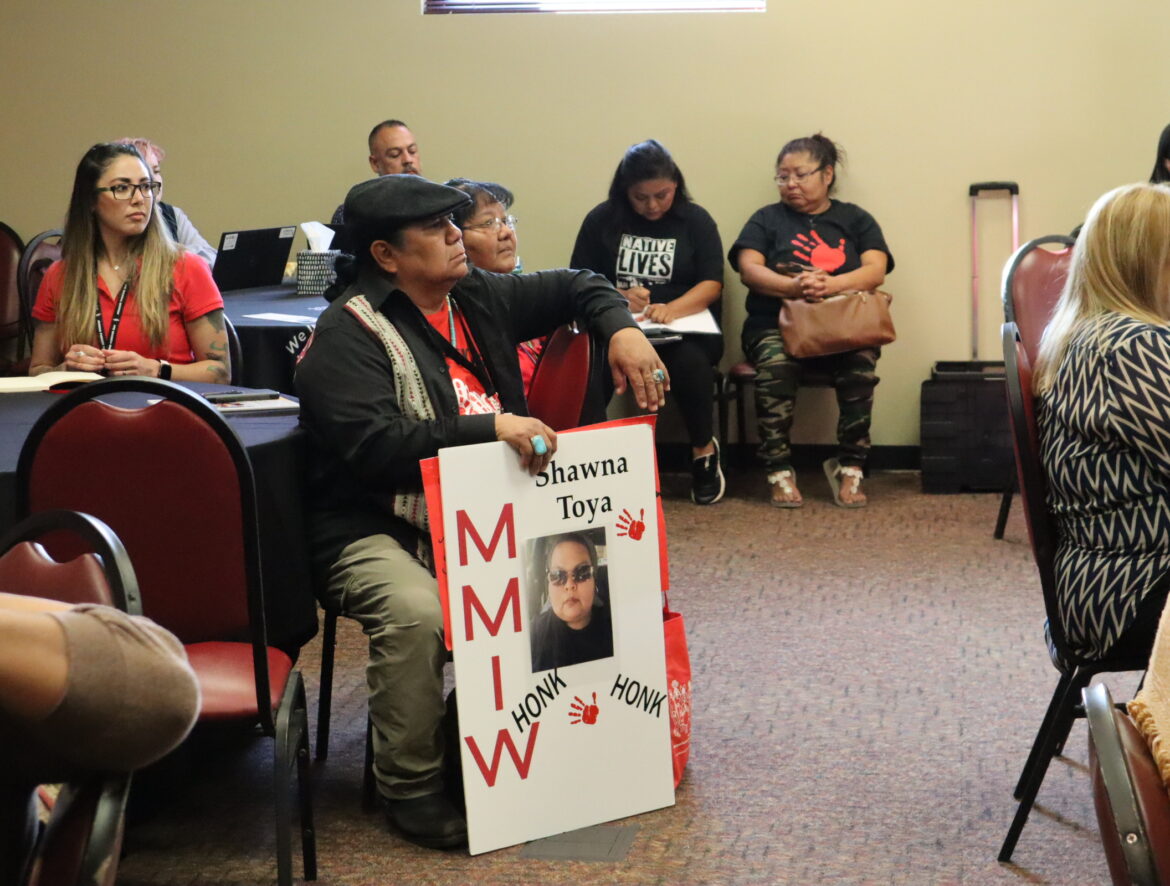 The parents of Shawna Toya attend the inaugural Missing in New Mexico Day event at the Indian Pueblo Cultural Center on Oct. 22. Toya's body was found in her car in Albuquerque over a year ago. Image: Bella Davis for New Mexico In Depth

The Attorney General’s Office has made advances this year in addressing the crisis of missing and murdered Indigenous people (MMIP), but it needs dedicated funding from the Legislature to keep it up, Mark Probasco, deputy director of the office’s Special Prosecutions Division, told the Indian Affairs Committee on Thursday.

The legislative committee didn’t argue, passing a motion to recommend inclusion of $3 million in the state budget for the office to continue its work on a nationwide issue that’s gained increased attention in New Mexico in recent years.

A state task force published a response plan in May with a number of recommendations, although what legislative action might come next is unclear.

There are at least 192 Indigenous people missing throughout New Mexico and the Navajo Nation, according to a list the FBI last updated in October. State officials and lawmakers say that’s likely an undercount.

Senate Bill 12, signed by Gov. Michelle Lujan Grisham in February, created a specialist position in the AG’s Office and allocated $1 million to a grant program aimed at establishing a network to support efforts by tribal nations to identify and find Indigenous people who are missing.

An additional $1 million for at least one full-time specialist didn’t make it into the final version of the bill. As a result, the AG’s Office has been drawing resources from other areas, Probasco told the committee.

“It’s one thing for the state to say that it is committed towards this important work,” Probasco said. “We do the best with the resources that we do have, but the reality is that in order for us to maximize the law that has been passed and to make sure that we give these families the best chance at moving forward, it has to be better funded.”

Since February, the office has assisted in prosecutions, helped compile the FBI list, built partnerships with other law enforcement agencies, and collaborated with the New Mexico Press Association to offer training on how to humanely cover MMIP cases, Probasco said.

Probasco pointed to the murder of Cecelia B. Finona (Diné). After being reported missing in 2019, the 59-year-old Farmington resident was found dead in 2021.

Jerry Jay was prosecuted with help from the AG’s Office and pled guilty in September to first-degree kidnapping and second-degree murder. He killed Finona in Farmington and traveled through the Navajo Nation and multiple states before dumping her body in Nevada, Probasco said, adding that the case highlights the jurisdictional barriers that often complicate MMIP cases.

“When we look towards the question of why did we need this legislation, I can point most directly towards the fact that her family was able to get her body back, was able to bury her, knew what happened to her, and was able to see her killer brought to justice,” he said.

Probasco responded that “Indian” is a political classification rather than racial.

“One thing that was very critical in our work in this field is to recognize the inherent sovereignty nature, of the fact that tribes are sovereign entities,” he said. “It is no different from, for example, in terms of the Attorney General’s Office’s involvement, the inherently complex issues that arise when fugitives run to Mexico.”

Probasco told the committee that $1.5 million is the minimum level of funding the AG’s office needs to keep up the work mandated by SB 12.

“There has to be sufficient prosecutors, investigators, and culturally sensitive specialists as required by this statute so that this work can continue going forward and that it does not stop here,” Probasco said.

Sen. Shannon Pinto, D-Tohatchi, who’s the co-chair of the committee, proposed $3 million, with the stipulation that any unspent money revert to the general fund. The committee, after some brief discussion, passed the motion unanimously.